Fascinating villages with plenty traditional houses and a variety of burial methods.

There are not that many roads in Tana Toraja, and there is not that much traffic. Which is what we found out when we wanted to take a pete pete – a minibus – to Batutumonga, a village located on the slope of Gunung Sesean. At the terminal, the next pete pete was to leave some two hours later only, and that is scheduled departure, not necessarily actual departure. But there is always a car that is prepared to take the foreigner, for the appropriate fee, and 15 minutes later we were on our way. Good decision, to rent a car, because the drive up was absolutely fabulous, with splendid views over the rice paddies below – and plenty of opportunity to stop on the way and take pictures, something a little more difficult with public transport. 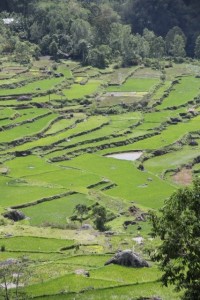 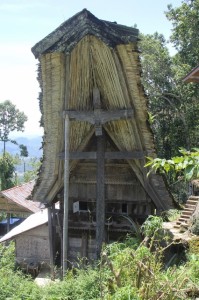 an old tongkonan, with original roof 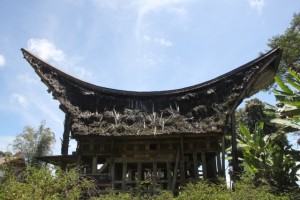 and another one, close to collapse 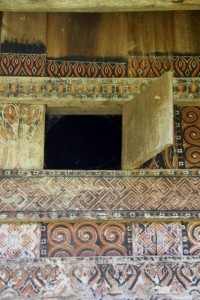 window, not for a coffin this time, in a tongkonan front 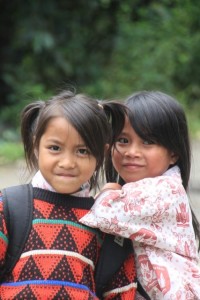 two girls, keen to be photographed

Batutumonga is not that special, but from here one can walk to Lokomata, a traditional village with, allegedly, the largest burial rock in the area. In this mausoleum-turned rock tens, if not over a hundred, niches have been hewn out to store coffins, which are being placed in the niches by using tall bamboo poles to climb up. The tradition was to place wooden effigies of the dead, called tau-tau, in front of the caves, but since so many are being stolen, many people keep the effigies in their houses instead, and in Lokomata there are just a few outside, high up the rock face. Even after burial, people continue to bring offerings, in the form of bottles, cigarettes and other stuff, whilst the plastic flowers have a tendency to remain, too. 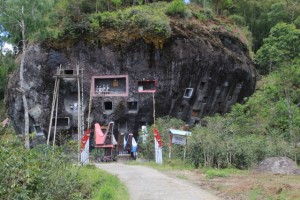 and this is how they get to the niches 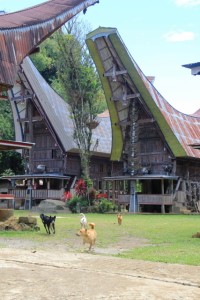 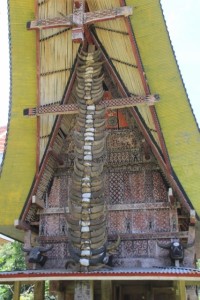 once again, with buffalo horns to impress the world 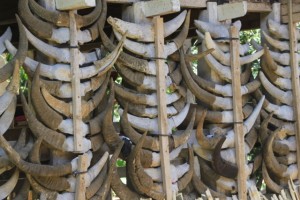 in this case, horns have even been put at the side of the tongkonan 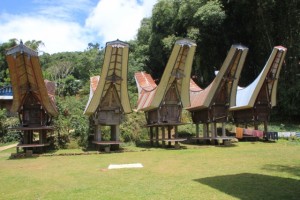 a collection of rice barns, also in Lokomata 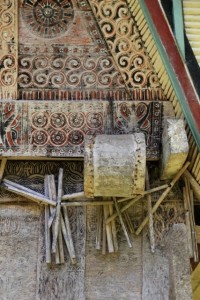 drum outside the tongkonan

A little further is the village itself, with many traditional houses and rice barns, always a spectacular sight.

The good thing of driving up is that the subsequent walk back is downhill. Back in Batutumango starts the path down to Pana, a village with another burial cave, and some difficult to discern platforms in the trees with further coffins. Another village characteristic, well exposed here, is the rante, a ceremonial ground with megaliths, individual rocks of sometimes up to 4-5 meters high, put upright. Not particularly impressive, but part of the local culture nevertheless. 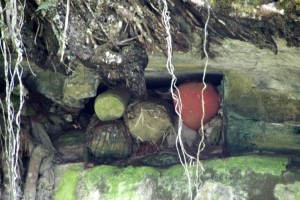 Pana cemetry, one of the man-made caves stuffed with what looks like wrapped bodies 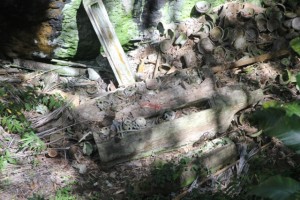 some of the coffins have come crushing down, displaying their contents 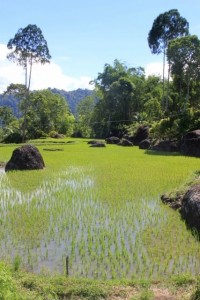 rice paddies on the way to Tikala

The walk down, ultimately to Tikala, from where we find a car to bring us back to Rantepao, is a very pleasant one, through forest and bamboo groves, and past villages. However, it is obvious that this is a much more touristic area than where we have been so far. The traditional greetings have been replaced, as least by the children, by “manny, manny”, or “bonbon”, or gule (which means sweet, as in bonbon), and when we don’t give them anything, they happily use the F-word – but only once we have safely move far enough away not to be a potential threat anymore. Of course they have learned this from the foreigner, but they know perfectly well that it is an insult; still, they use it, and the parents don’t discourage it – also very un-Indonesian, we have not come across this anywhere else. The blessings of tourism are varied. 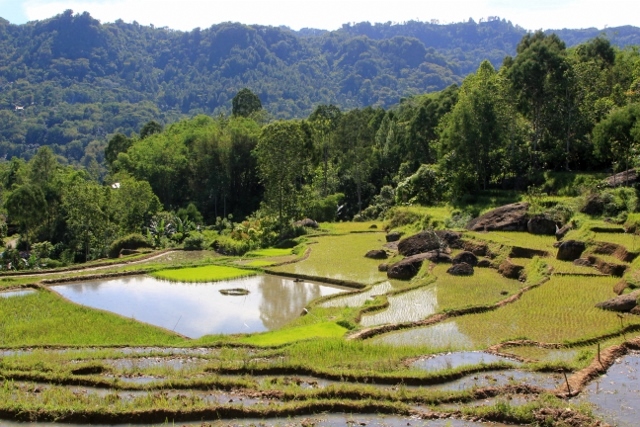 and more rice paddies, I never get enough of this 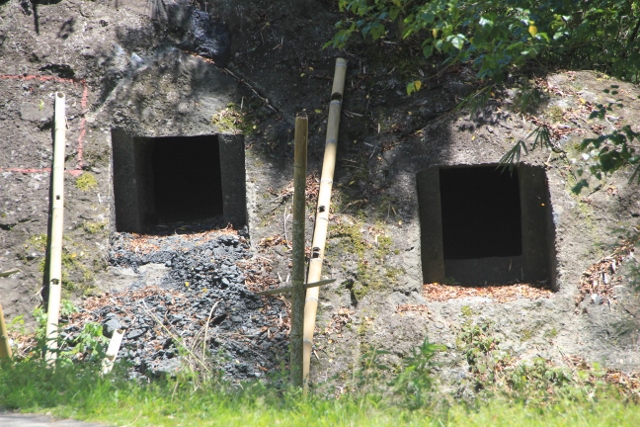 more graves hewn out of the rocks, still empty

One Response to 40. Tana Toraja