40. Phitsanulok The Gurlitt Collection in Bern and Bonn 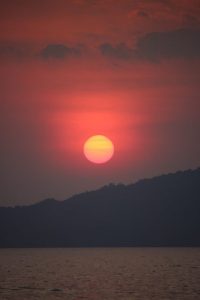 sunset over the Andaman Sea, in the south of Thailand

A bit about beach holidays, about Thailand and the Thai, and about our past journey, to wrap it up.

I am not a great lover of beach holidays – I hate the salt of sea water on my body, or the sand in my swimming trunks; the noise of the neighbour’s ghetto-blaster, or the music from his smartphone, these days; the over-excited screaming of children playing nearby, the overpriced cocktails which are diluted in any case, the lack of service on the beach and the arrogance combined with the  unprofessionalism of the under-paid students who pose as a waiter on the boulevard terraces. Amongst other things. Yet, during ten weeks in Southeast Asia, including self-proclaimed beach paradise Thailand, one has to make concessions, so towards the end of our trip we spent five days in one of the many beach resorts in Southern Thailand. It helped that it was still freezing in Western Europe. And it helped that we found an abandoned cove, accessible at low tide only, with no other people, where we enjoyed our own gin-and-tonic in the sunset. No music, no children, no fake waiters and no undiluted drinks; only the sand and the salt remained as nuisances. 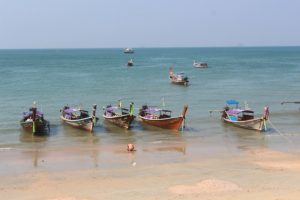 boats along the beach in Ao Nang 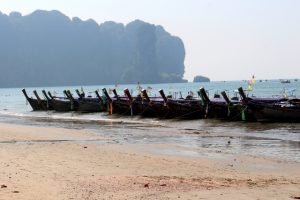 used for all sorts of tourist trips 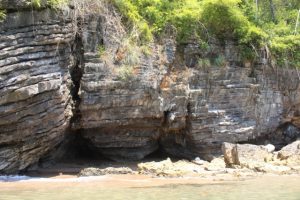 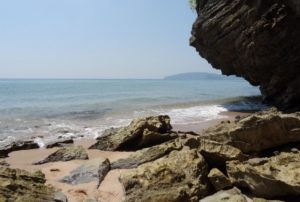 private, only accessible at low tide 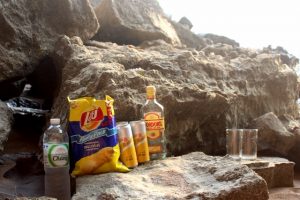 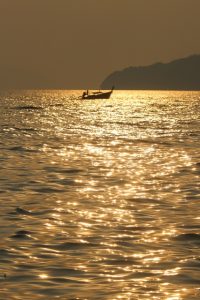 and the view from the cove

In all fairness, five days in a resort also means that we don’t have to worry about the next destination, finding the right transport, booking the right hotel, working out how we are going to see the sights. Relaxing. Time to read a few books, time to catch up with this blog, and time to look back on this trip, especially the weeks we spent in Thailand (I already commented on our experiences in China and in Vietnam).

No doubt Thailand has shown us some very impressive temples, in Isaan and in the old capitals Ayutthaya and Sukhotai. Ruined stone temples, quite different from the Vietnamese temples we visited, which were also old, but made of wood, and maintained and restored through the ages. No doubt Thailand has a much more efficient infrastructure, with trains that, despite their reputation, do seem to largely run on time, bus schedules that are intelligible, and ticket windows that provide information mostly in passable English. Booking sites contain hundreds, no, thousands of hotels, and all kind of travel agencies are dying to sell you every available tour, to every possible tourist location. Restaurants come in many varieties, from authentic Thai to Indian and Chinese, from pizzerias to steak houses; almost all have English language menus available, and in the more popular tourist destination they leave out the hot chillies, even in the most authentic of those Thai restaurants. Traveling in Thailand is easy, and it is comfortable. 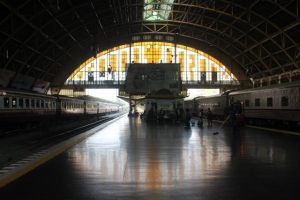 And yet, something keeps on nagging. And it has to do with the people, those proverbially friendly Thai. I actually don’t think they are that friendly. Sure, they kowtow each time they welcome you, wherever it is, with a big smile, but this is culturally prescribed. How much genuine friendliness is behind that mask is difficult to assess. Plenty of times, shop attendants are outright rude, just continuing their conversations with their colleagues and not even looking at you when they give you your change back. Plenty of waiters – there they are again – cannot be bothered to look up from their smartphone screens until they have finished their game, before they come and serve you. And more often than not a simple request in a hotel or restaurant is simply turned down, with an unexplained no. I never got the impression that Thai people are really nice, neither that they are really hospitable, or generous, or flexible. There are exceptions, like the couple that gave us a ride when we were struggling with our suitcases in Pak Chong, where public transport and taxis don’t exist. But mostly, every favour, every concession, is ultimately a business transaction. This may well be a function of tourism, of course – if you observe the average tourist in a beach resort, you could sympathise a little; it doesn’t show a lot of respect if you enter a restaurant in bathing suit, for instance -, but I had similar experiences in Isaan, where not many tourists go. I know that in the West this is not different, but somehow I feel better treated as a tourist in France, in Spain or in Germany, than in Thailand. Which is surrounded by countries full of really friendly people, like Vietnam and Laos, which we also experienced this trip. Or, dare I say, even the Chinese are more genuine, and friendlier than the Thai. And that says quite a lot. 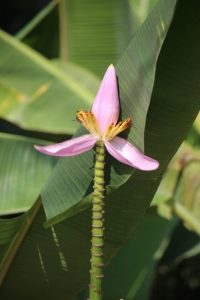 I don’t think I’ll be going back to Thailand, with so many other options around. Which is not to say, of course, that I have not enjoyed our three weeks here, including the five days in a beach resort. The Thai experience, combined with the seven weeks in China, Vietnam and Laos, was ultimately another great trip, varied in terms of weather (from cold and frustratingly foggy to nice and hot), activities (from trekking and cycling – lunatics – to sitting back on a boat in Halong Bay, and from a hands-on cooking workshop to tasting Thai wine) and sights (from stone temples and stone jars, to wooden temples and, although rapidly disappearing, wooden houses). In between, I wrote up another travelogue: hope you enjoyed reading it, and looking at the far too many photographs. Feel free to drop me a line, with suggestions for improvement; after all, you will have to read the next one again, probably in a year’s time, or so.

Because in the process we also skipped another European winter – well, almost. 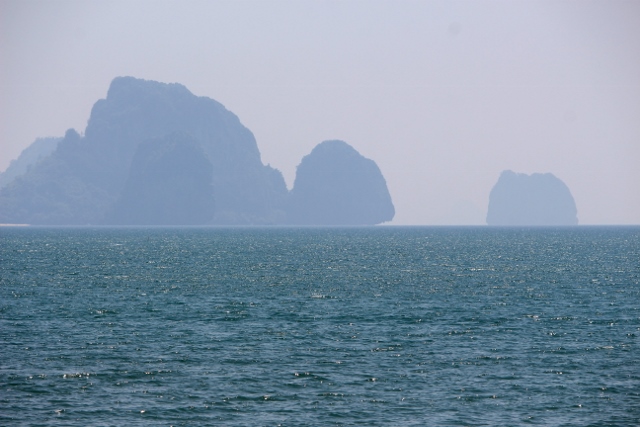 and more karst mountains, this time in Ao Nang near Krabi