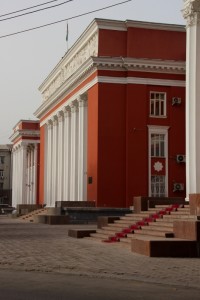 Tajikistan’s attractive capital is booming and well looked-after, unlike so many other Central Asian cities, with a pleasant tree-shaded centre and lots of construction in its outskirts

Dushanbe is not at all what we had expected. Over the past six weeks we have seen so many decaying towns, but not so Dushanbe. The outskirts, on almost all sides, is one big construction site, new buildings go up everywhere, and highrise, too. Ministries, apartment blocks – rapidly replacing the old Soviet-style palatis -, and many other, rather poorly defined, structures are being build, not necessarily very attractive, but clearly with more attempt towards design than in the old days; dark glass, somewhat frivolous balconies, and there is even some neo-neo classic – the application of half-pillars, stuck against the outside of the highrises. Tacky, perhaps, but they‘ll get away with it. North of town, in the direction of Chorbag along a pleasant fast-flowing river, the construction spree focuses on villas and houses for the rich and famous, as well as guesthouses aimed at the slightly less rich: this is obviously a much-sought after area, higher up the mountains and cooler than Dushanbe itself. 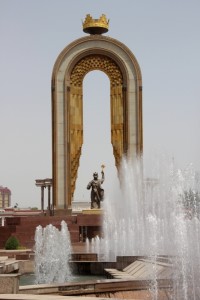 Dushanbe’s most ostentatious monument, the statue of Ismoili Somini 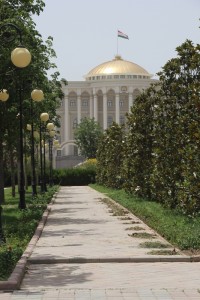 the Palace of Nations, one of Dushanbe’s outsized buildings 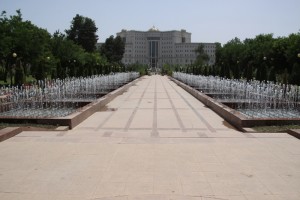 another exorbitant Dushanbe building, along the central park with its multiple fountains 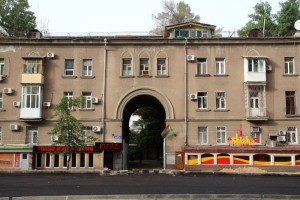 a building SE of Dushanbe centre, with its typical architecture, and arched gate to the court yard 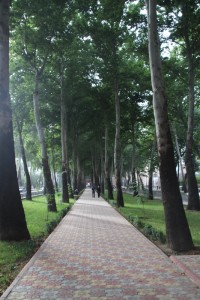 walking way in the middle of Rudaki Avenue 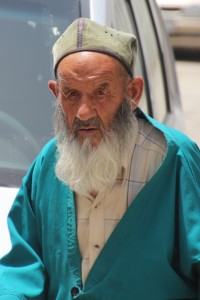 one of the mosque goers near Haji Yakoub mosque 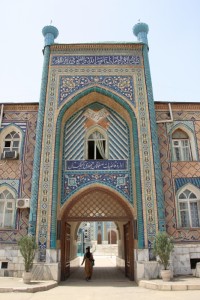 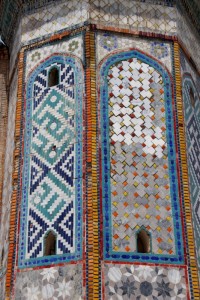 the bottom part of the mosque’s minaret, with unusual colours

Question is where all the money comes from to carry out this building spree; the odd mining contract with China cannot be enough to pay for all of this, and Tajikistan doesn’t have the large oil and gas reserves of Kazachstan, that explain Almaty’s transformation.

The centre of town is still fairly humble, although here, too, new buildings have sprung up. There are flowers everywhere, in the gardens of houses, but also in parks, round-abouts, and in front of office buildings. The town is clean, and what is most remarkable, unlike so many other towns we have encountered on this trip, Dushanbe is not falling apart, there are no pavement tiles loose or missing, there are no fences rusting, or walls crumbling. Grass in the public spaces has been cut. Workmen are busy clearing drains. Somebody is looking after the town, and paying for it. 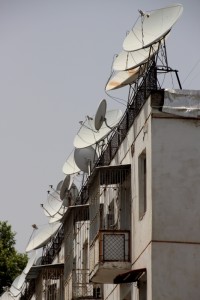 not all buildings are modern 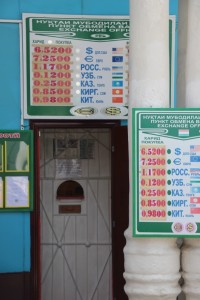 The main thoroughfare, the Rudaki Avenue, doesn’t feel like one, with its old trees, that line the sides as well as a walking way in the middle, creating an old-town atmosphere. Which, however, disappears as soon as one reaches the central park – like all ex-Soviet cities, Dushanbe has a range of parks, the central park being the biggest. The park contains a statue of Rudaki, a 7th C poet and national hero of Tajikistan (which, you will agree, is better than having Tamerlane as your national hero), as well as a range of fountains, hundreds of benches, several rose gardens, and the world’s tallest flagpole, the flagpole alone constructed at a cost of 3.5 mln US$. No old, leafy trees here, that will still take a while. But other parks throughout town have not been reconstructed, and are oases of shade, sometimes combined with a table tennis and pool-billiard area, or with outside restaurants serving tea, a beer, or simple food. Lots of people enjoying the outside in the evening, after all, it is summer and temperatures are very pleasant – a relief after weeks of high altitude cold. 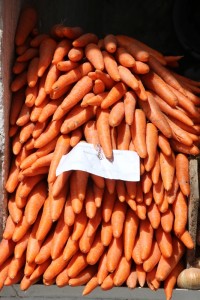 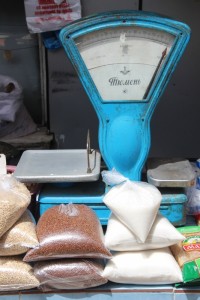 a scale in the bazaar 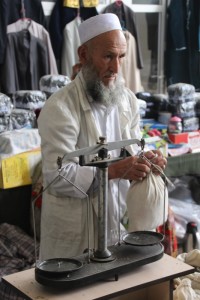 a real medicine man, weighing herbs for a special cure 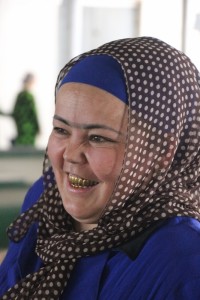 golden teeth, everybody has them here, perhaps long-term investment? 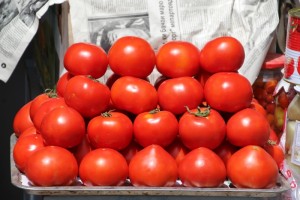 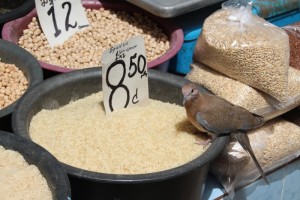 an unusual customer for the rice 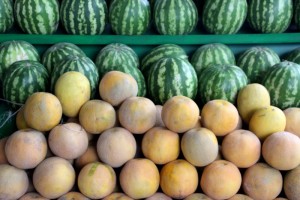 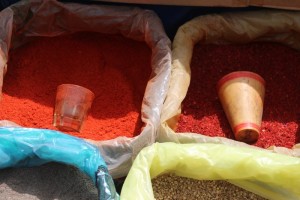 spices in the market

Public transport is by trolley busses, but more even by mini busses as well as cars, that drive the same routes: it seems everybody can just stick a number behind its windscreen, and start driving a chosen bus route, even with normal saloon cars. Traffic anyhow is a curious thing, with complete lunatics sharing the road with rather over-cautious drivers, as well as plain incompetent ones, all trying to avoid the trucks and busses that don’t seem to care – the only thing all seem to have in common is the love for the car’s horn.

At the other end of the centre is Green bazaar, the main market in town. Well organised, colourful, as a market should be, especially because, even though it is only early June, the stalls are full of fruit, locally grown cherries, apricots, plums, anything. It looks autumn; apparently in the area around Dushanbe the growing season starts in February or March, as it doesn’t get very cold here, and by June the harvest is ready – better get in off the fields before July/August, when it gets scorching hot. 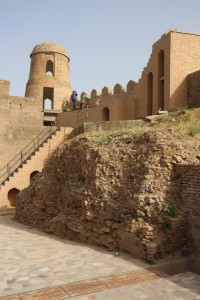 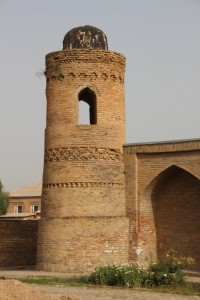 at least one of the towers, or minarets, of the nearby madrasse is still original

Hisar, a small town outside Dushanbe, has a castle. Well, had a castle, of which little remains, so the place is meticulously being rebuilt. Legend has it that the castle has been rebuilt 33 times already, this would be the 34th, but the first time that it is being prepared not for defence, but for offense: it is monstrous, with its fake-crenulated wall and its fake-authentic mausoleum-like purpose-built souvenir shops inside – most of them closed. I cannot imagine that the tourists will be flocking here in great numbers once it is finished. And once again, who pays for this, and for the new dual carriage way that is going to lead to it? Having seen the Pamirs, one could argue that some redefinition of priorities could be considered, too: after all, with a fraction of the money spent in Dushanbe the Pamir people could get so many more opportunities. And then I haven’t mentioned yet investing in upgrading the Pamir Highway, which is a lifeline for this country.