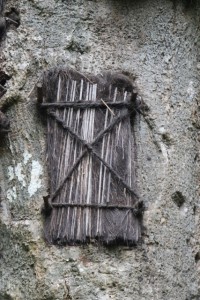 baby grave in a tree in Kambira

The Tana Toraja area is too big to cover in one blog entry, especially because it is so photogenic. After our walk, we braced ourselves for the most touristic villages, Lemo and Londa, which are easily accessible by car and by small bus. 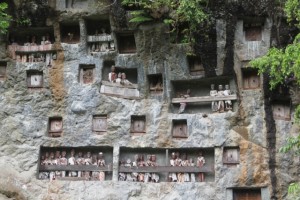 rock graves and tau-tau in Lemo 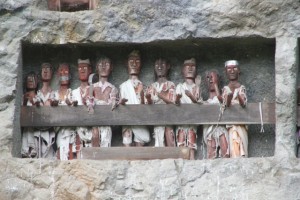 In Lemo there are further rock graves, here adorned with several balconies with tau-tau. We were not the only ones, a group of five tourists with local hippy guide had arrived before us, and the guide was explaining all the details of Toraja culture. When we left, 20 minutes later, they hadn’t moved yet, still listening to the guide – how much is there to tell, and how long can you keep listening? 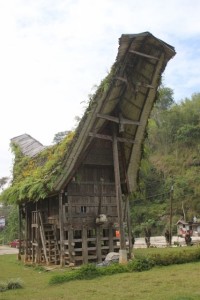 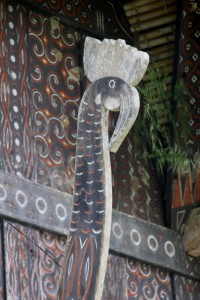 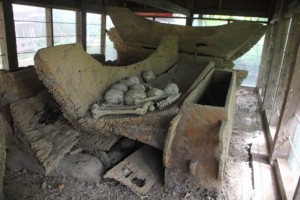 remains of coffin and skeletons in museum barn in Suaya 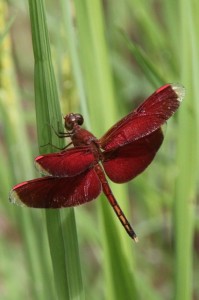 red libella outside Tampangallo cave, to bring some colour in this story 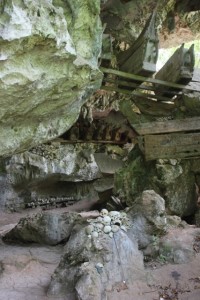 entry of the Tampangallo cave 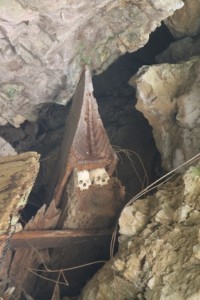 Less touristic Suaya also has a rockface with graves, and several tau-tau, as well as a wooden barn, with glass windows through which one can see the remnants of old coffins, complete with human bones and skulls. But even this didn’t prepare us for Tampangallo, the next village. A short stroll through peaceful rice paddies, past an explosion of pink flowers, brings us to a large natural cave in karstified limestone, with wooden coffins placed high up near the cave’s ceiling, positioned on wooden beams. Others have been stuck in hollows in the cave, or are crumbling to pieces on the floor. Balconies with tau-tau decorate the cave walls. In niches, on isolated rocks, or just on the floor, are the skulls of hundreds of deceased, probably fallen out of rotten coffins, and stacked together by relatives. This is quite something, easily the most spectacular spot in Tana Toraja that we have seen. And there is nobody else, at least nobody else living, obviously this is already too far from the tourist circuit to be visited by the groups on a day trip. 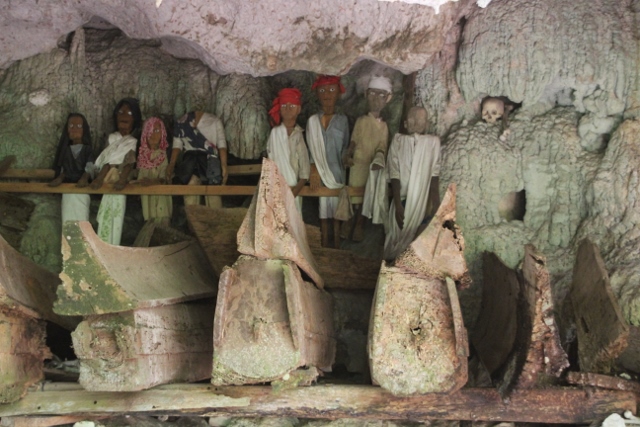 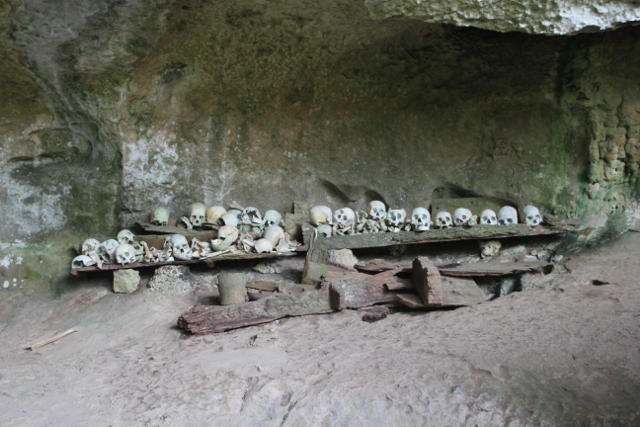 skulls, obviously stacked up by whoever maintains the cemetery 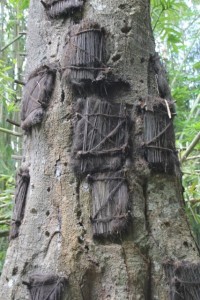 tree with baby graves in Kambira

Close to Tampangallo is Kambira, noticeable for its baby graves in a tree – small niches have been hollowed out of the tree, instead of the rock; apparently only babies that haven’t gotten teeth yet qualify for this. The number of graves in this one tree is a stark reminder of infant mortality, clearly not yet under control here.

Finally we hit Londa, tourist attraction number one in the area, and inevitably disappointing. Coffins have been stuck in two caves, once again natural fissures in the limestone, and like in Tampangallo, many are rotting away, and have left skulls, and bones, on the floor. Skulls have been stacked up, amongst others under a natural hole in the rock face, where tourists are encouraged to stick their head through, and have their picture taken with the skulls. All very tasteless, morbid even, but an opportunity eagerly taken up by many. After a quick visit to the caves, with our mandatory guide, we walk around, to view the rock tombs of the upper class and the ‘medium’ class – we have only been in those of the ‘underclass’, but the better off are buried higher up, with coffins being lowered on ropes into the caves. 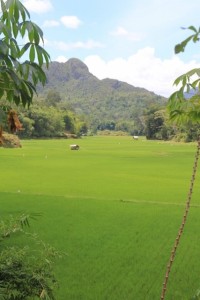 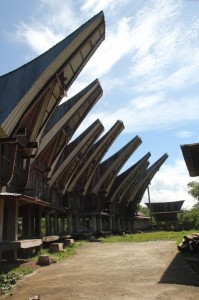 tongkonans lined up in Marante 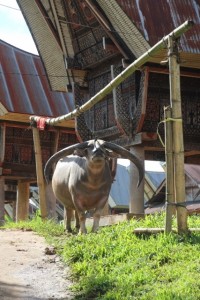 huge bull, imagine these horns on your house! 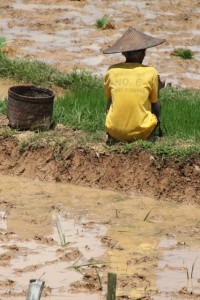 We have seen what we came to see, but we have another day, which we use to walk to Marante, another nice village with tongkonans, and back; initially through bamboo groves and rice paddies, but the closer we get to Rantepao again, the more we walk through populated areas and the less attractive the country side becomes. Populated areas come with the noise of motorbikes, of course, and also with scores of dogs, mostly barking only, but still something to be alert for.

By the time we got back to our hotel, the rainy season caught up with us again. Glad we settled for a comfortable hotel, this time.

next: moving north, to Palopo, Pendolo and Poso 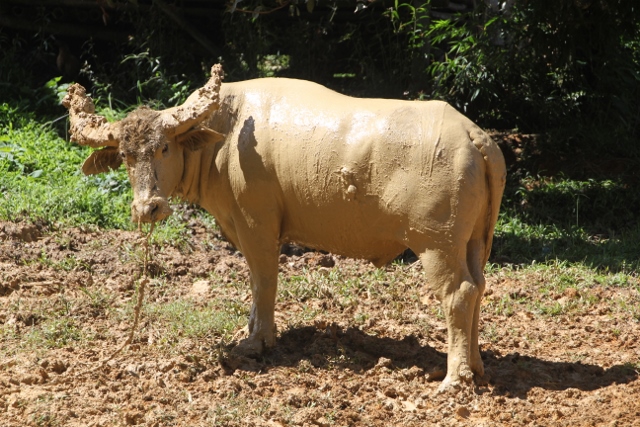 buffalo after a mud bath