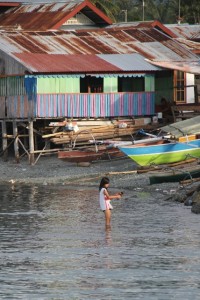 Ampana harbour in the evening

A long and varied journey to reach the Togian Islands, involving various forms of public transport again, albeit all pretty easy ones.

Look at the shape of Sulawesi, and you notice that it is actually an island made up from peninsulas. In a bay in between two of these are the Togian Islands, out next destination. To get there is somewhat of an effort – which is why the Togians are not overdeveloped for tourists. Attractive idea, of course.

But first, to get there. We boarded a bus in Rantepao, our first Sulawesi bus, and not uncomfortable, for the eight hour journey to Pendolo (via Palopo – why do all these names need to look so similar?), which became ten hours thanks to landslides, closed roads, and multiple eating breaks. Nothing ever runs to schedule, in Indonesia. When we were finally dropped off at a hotel, at 7 pm, it was pitch dark, and the hotel looked equally dark. But we found somebody, who even gave us a room – for an exorbitant amount of money, but hé, you haven’t got a lot of options in the dark. Next morning, in early daylight, it actually turned out to be a really nice hotel, or at least a once-upon-a-time-had-been really nice hotel, with cottages on the beach of the Danau Poso – Lake Poso – and a wooden restaurant balcony on stilts extending over the water. It is just that parts of the balustrade were missing, and some of the floor boards of the restaurant are rotting away. Such a pity, so much potential. But so little effort in maintenance. 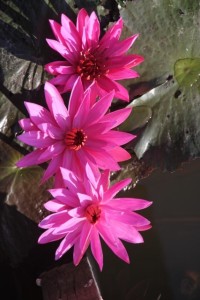 flowers in the water at the Pendolo hotel jetty of the Pendolo hotel 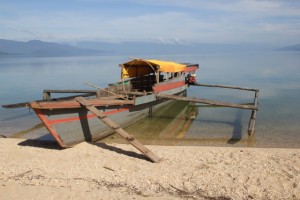 our lake transport to Tentana

The reason to come to Pendolo, was the lake, of course. Plan was to avoid another long bus ride by chartering a boat to bring us across to Tentana, three hours north, at the other end of the lake. So after a quick morning dip in the lake, we set off, in a brilliant outrigger canoe with double barrel outboard engines, across a completely deserted lake. This area is strongly Christian: Sunday morning, and everybody in church. Which is why, when we got to Tentana, we spent more than an hour finding a hotel room, not for lack of hotels, but for lack of hotel staff who could show us rooms and negotiate a price. At which time some previously hidden skills of my travel companion surfaced, like opening hotel rooms with a Swiss Army knife. So that we at least could use a bathroom. 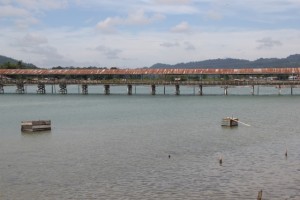 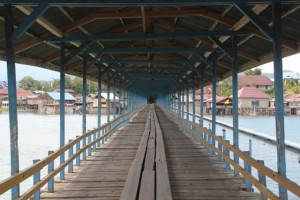 covered bridge, from another angle 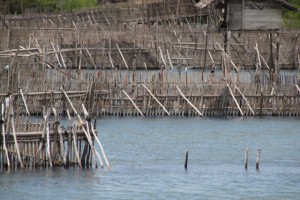 eel traps in the Poso River in Tentana 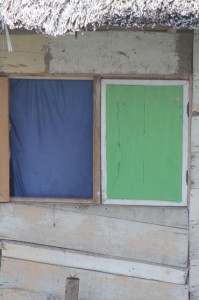 window of a Tentana house

Apart from sitting at our hotel balcony, or looking at a covered bridge and extensive eel traps in the river – which tasted disappointingly muddy, the eels, not the river – there wasn’t a lot to do in Tentana. Another six hours drive, this time in a car we rented together with some other travelers, brought us to Ampana, the departure point for ferries to the Togians – bypassing Poso altogether, a large and apparently uninteresting town except for its recent history of religious violence.

I told you, not easy to get to, these Togian Islands. There is another five hour ferry ride ahead of us. fishing boat off the beach of Ampana 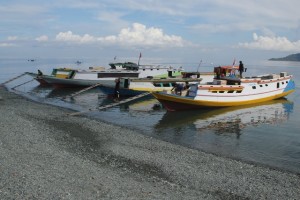 freighters for the Togian Islands, in Ampana

3 Responses to 42. the road to Palopo, Pendolo en Poso