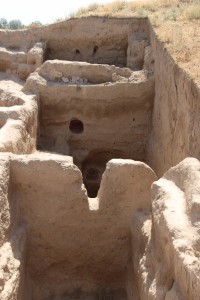 the recognisable remains of houses in ancient Penjikent

The area around Penjikent is home to two ancient cities, and, from the looks of it, an even older winery

In the western-most corner of Tajikistan is Penjikent, almost at the border with Uzbekistan, and tentalisingly close to Samarkand and its many tourists, if only the border between the two countries would be open – which it hasn’t been for several years now. Which is a pity, because Penjikent is home to two of the oldest settlement remains in Central Asia. 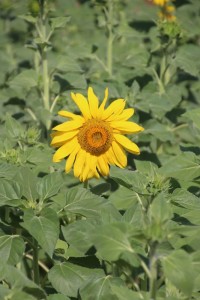 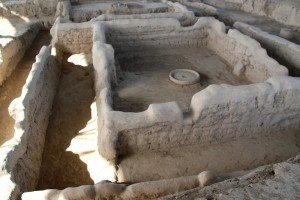 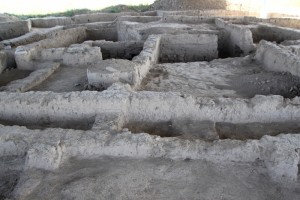 further ruins in Sarazm, unprotected except for a large metal roof

Sarazm is the oldest, claimed to date from around 3500 BC, and re-discovered only in 1976. Five large metal roofs protect the dug-up remains, which apparently have not been restored. Parts of walls, rooms, paths are clearly visible, and quite impressive considering this is so old. One can freely walk down in the excavation pits, and wander around the dwellings, and there are, of course, no other tourists.

Ancient Penjikent is newer, a Sogdian city which flourished in the 5th – 8th Century, but was utterly destroyed by the Arabs conquering the town in 772 BC, massacring the population in the process, to the extent that there was no point rebuilding the city. The site is touted as the Pompeii of Central Asia, but this is perhaps creating a little too much expectation. Although the site is much larger than what is left of Sarazm, it is unprotected, and many of the walls are crumbling. With a bit of imagination you can still get the feeling of walking the old streets, in between the houses and other buildings, but it is difficult to recognise what is what. 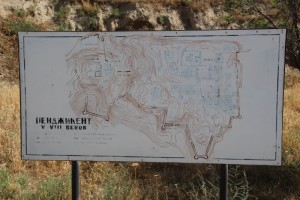 the map of ancient Penjikent, the only indication at the site 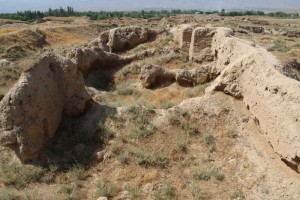 the entrance gate to the city 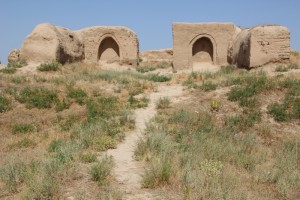 another Penjikent building, not sure what it is 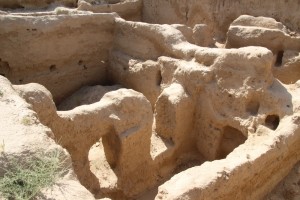 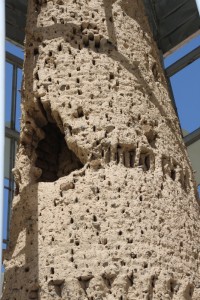 detail of the minaret at Aini 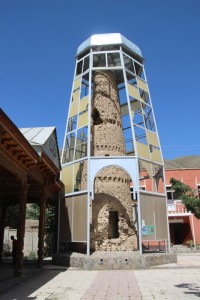 Because of the closed border, the only way to get to Penjikent is from the Dushanbe to Khujand road, and then following the Zarafshan river down, and the next day back up again – especially a pain because a road building crew was upgrading the road, which meant frequent closures for ongoing asphalt laying or bridge building. But it allowed us to visit a couple of things on the way. 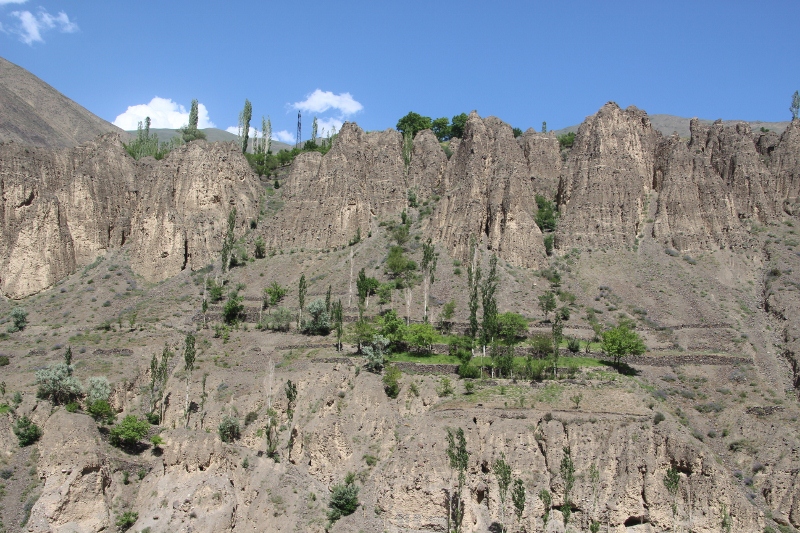 the country side on the way to Penjikent 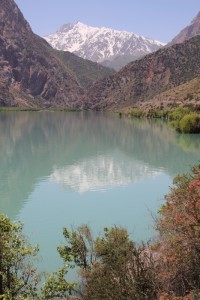 Iskanderkul, the lake named after Alexander the Great 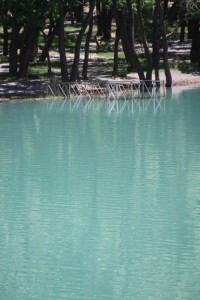 turquoise it is, Iskanderkul, with inviting jetties and beaches

One of those is the picturesque mountain lake of Iskanderkul, named after Alexander the Great. In the summer this is a popular holiday place at around 2200 m, but when we visit, mid-June, it is still very quiet. The road up is beautiful, without the dramatic scenery of the Pamirs, but with fabulous mountain views in multiple colours. 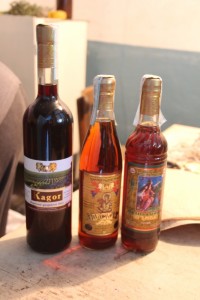 a few of the bottles from Marochnoe Vino 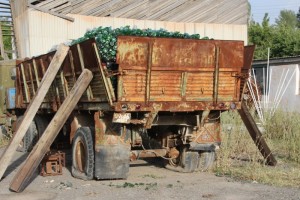 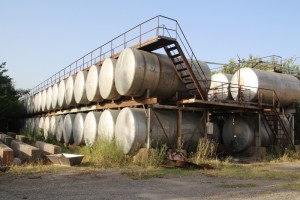 steel barrels at the winery 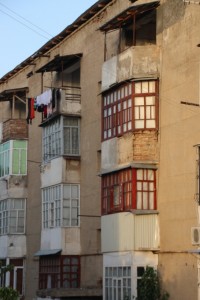 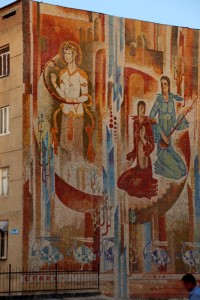 decorated at the side of the buildings

The other ‘attraction’ is the winery – yes, indeed, Tajikistan, too, has a winery! Apparently, there is only one,  Marochnoe Vino, 10 km from Penjikent, and we just had to see this, despite my earlier assessment that we would limit ourselves to Georgian and Moldovan wine. The winery stems from Soviet times, I think, perhaps established in the late 1960s – communication was not only difficult because of the language barrier, the only man present at the site wasn’t very talkative either. Outside are lots of stainless steel barrels – happily exposed to the sun, and it is hot here! – and once connected with a vinoduct to a production building. But the connection seems to be broken, and not much seems to be working here anymore. I seriously doubt that there is any wine being produced, despite the caretaker’s claim that they produce a total of 20,000 bottles a year – bottles of Cabernet, Muscat, the ubiquitous sweet red Kagor that we have found in so many ex-Soviet republics, but also Port wine, Cognac and Calvados; why not? We can try some wine – pay upfront, of course -, but we decide to buy two small bottles instead, to try later in our guesthouse. It is easier to drain them through the sink there, than to have to confront the caretaker with the undrinkability of his stuff – the most likely scenario, based on earlier experience. It is not easy to establish the vintage of our purchase, but it may well be a 1993 Cabernet and a 1993 Muscat, further adding to the suspicion that no new wine is being produced. Perhaps the 40 or 50 bottles in the little shop are the only bottles left! For the better, because the wine wasn’t great, of course, and quite a bit of it indeed ended up in the sink. 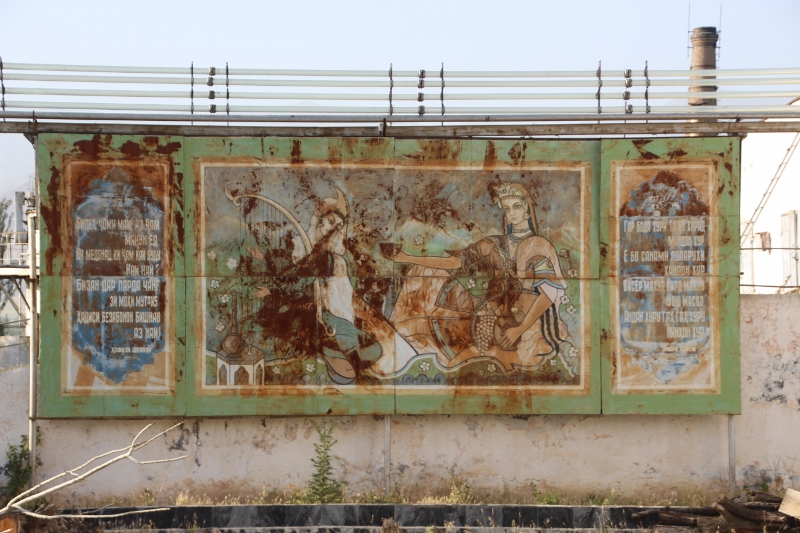 and this is decoration, rather old, at the Marochnoe Vino winery