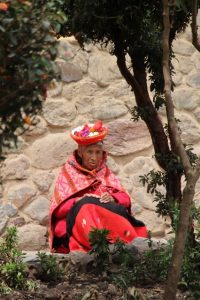 lady in traditional dress on the main square of Ollantaytambo

The village of Ollantaytambo does not only have a huge Inca complex above it, but is also very nice in itself, and not only because of its colourful traditionally dressed women.

Back from Machu Picchu we settle for a couple of days in Ollantaytambo. Also touristic, but somehow a lot less disturbing than Aquas Calientes; perhaps most tourists in Ollantaytambo are just passers-by, people who move from Cusco to the train station here, directly on to Machu Picchu, and back the same way. But the village warrants some time on its own. 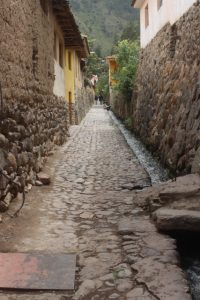 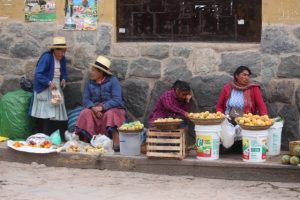 the market is a small-scale affair 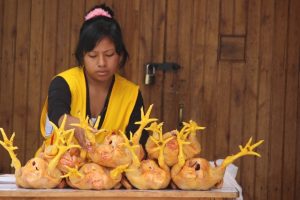 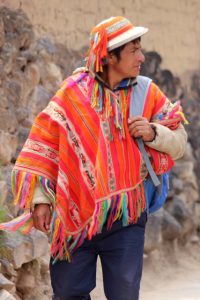 a man in traditional dress 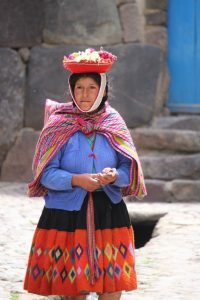 and a woman, with hat 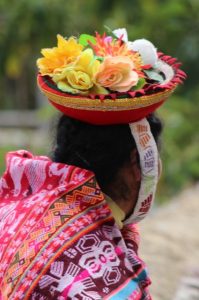 quite a few of them 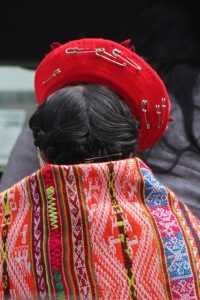 Wandering through the narrow, cobbled streets of Ollantaytambo, with its adobe houses, its courtyards, you could be forgiven for thinking that this is how an Inca village may have looked like, too. More than Pisac, the market here – every day, not just Sunday – attracts people from outlying hamlets, traditionally dressed. Mostly women, sporting colourful embroidered dresses and fabulous hats decorated with plastic flowers, but also men, with capes and smaller hats. They are quite aware of themselves, and some ask for money if you take photographs, yet I don’t think they dress up especially for the tourists. This is just how they go about, meet each other in the small Plaza de Armas, or do their shopping at the even smaller market square. 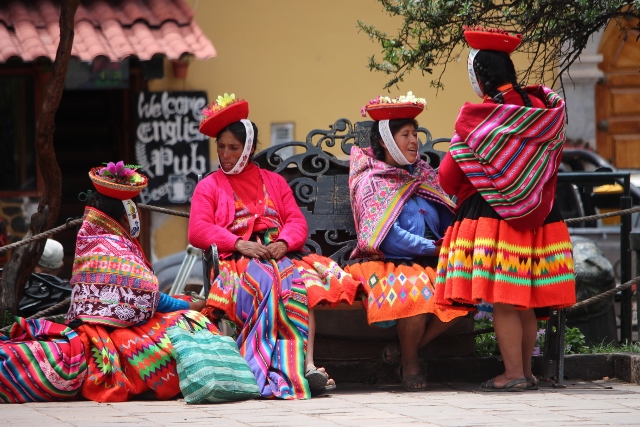 they meet for a chat in the Plaza de Armas 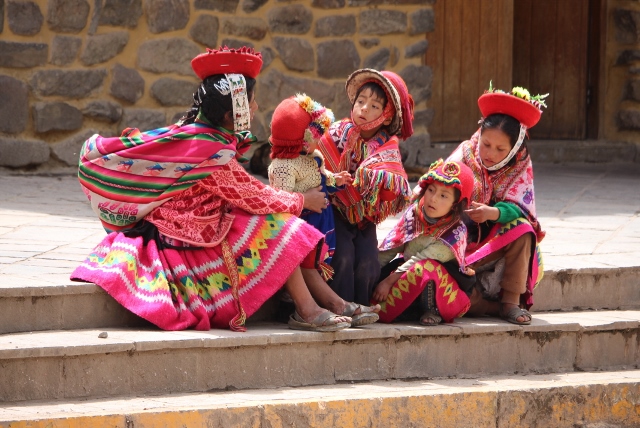 or, the whole family, for tourists to pay them for the photo 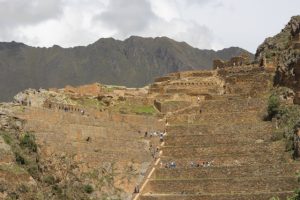 Above the village towers an Inca complex, built against the steep mountain slope, part religious and residential, part military. This is where Manco Inca initially withdraw to, after his unsuccessful attack on the Spanish conquistadores in Cusco, and where he managed to beat a Spanish force that came looking for him, by holing up on the slopes whilst inundating the valley, rendering the Spanish horses useless. What is left of the complex is impressive, with terraces supporting the structures on one side of the valley, and further buildings seemingly built into the rocks, on the other side. As with so many other Inca sites, here, too, an intricate irrigation system has been developed, which is still working. 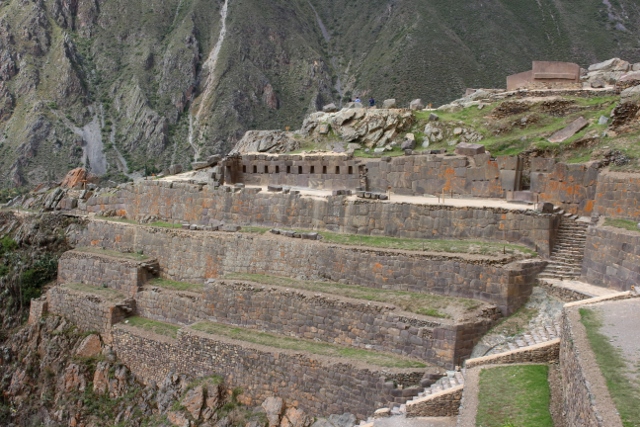 terraces, and the upper part is a temple 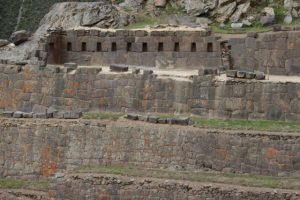 with much better masonry than the lower walls 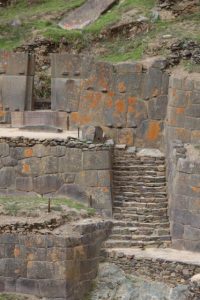 and an entrance at the top of the stairs 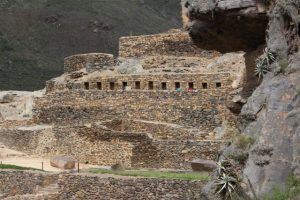 the is the military section, built hastily, for the retreat of Manco Inca 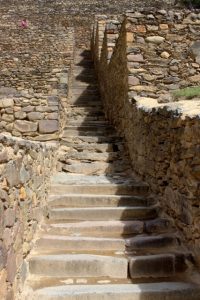 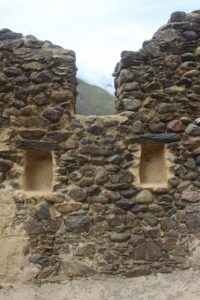 niches in the wall 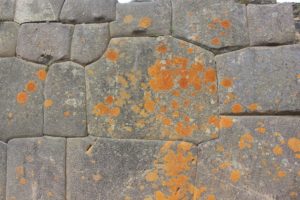 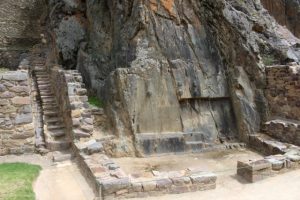 an offering place at the bottom 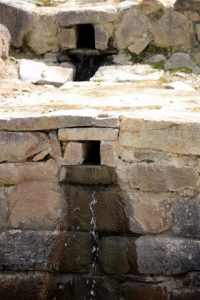 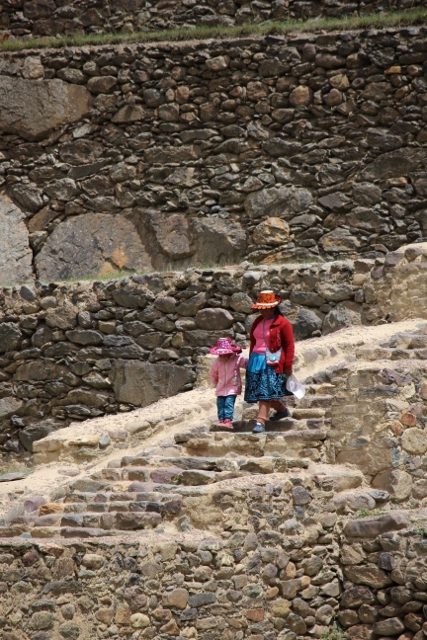 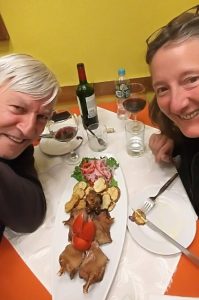 and us enjoying it, a bit 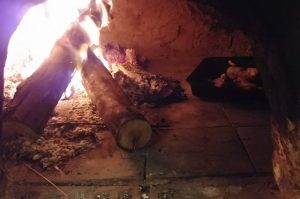 the cuj in the oven 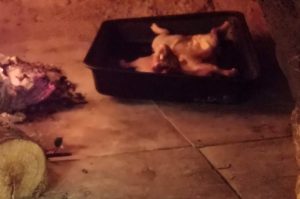 close up, so you recognise

On our last evening in the Sacred Valley, we finally manage to eat cuy, or guinea pig (or cavia, if you must know). Cuy is an Andean delicacy, a role it has fulfilled for much longer than any role as a cuddly pet in Europe, so obviously, we had to taste it. Hmmm, a little disappointing, very little meat and very many bones. According to the recipe, it tastes somewhere between a rabbit and a quail. Give me rabbit or quail anytime.

next: we fly to North Peru, to Chiclayo