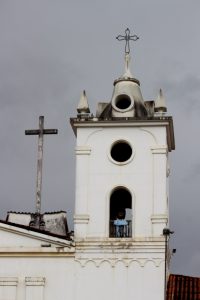 the cathedral of Chachapoyas

The small colonial town of Chachapoyas is a lovely place to spend a few days, and to use it as a base for several excursions.

The Chachapoyas were a fiercely independent tribe, until their conquest by the Incas around 1470 AD. But the Incas never really managed to control them, which is why, apparently, the Chachapoya people sided with the Spaniards as soon as they got the chance. Perhaps it is therefore that the Spanish established San Juan de la Frontera de los Chachapoyas, now simply Chachapoyas, in 1538, apparently the third oldest colonial town in Peru. 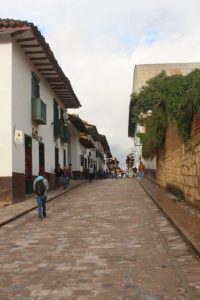 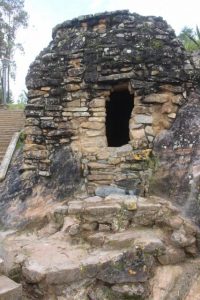 The town, at some stage an important trading hub between the jungle and the coast, is now a sleepy place in between what is called the cloud forest – low level clouds and mist surround the steep mountains, many of which are covered with jungle vegetation. That said, quite a few others are being cultivated, resulting in a kind of patchwork of green fields high up the slopes, not an unattractive sight. But it turns out to be wonderful little town, narrow streets with mostly well-maintained adobe houses, wooden balconies. This is the type of town we like, wandering through its streets, everybody greeting, tasting the friendly atmosphere. An attractive pedestrian street leads to the Plaza de Armas, which is being dominated by the large white cathedral. Steep stairs lead to a now disused well, the Pozo de Yanayuco – legend has it, that whoever drinks from the well will for always stay in Chachapoyas, bewitched by the beauty of its women; more likely, after drinking the foul water you will not have time to leave quick enough before you die. Higher still are a couple of viewpoints, but from above the town isn’t very attractive, with too much corrugated iron on the roofs. 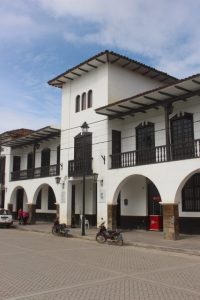 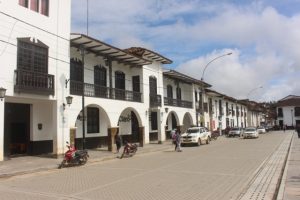 one side of the Plaza, with attractive arcade and balconies 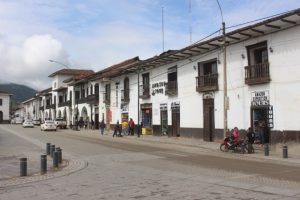 from the other side, smaller houses, smaller balconies 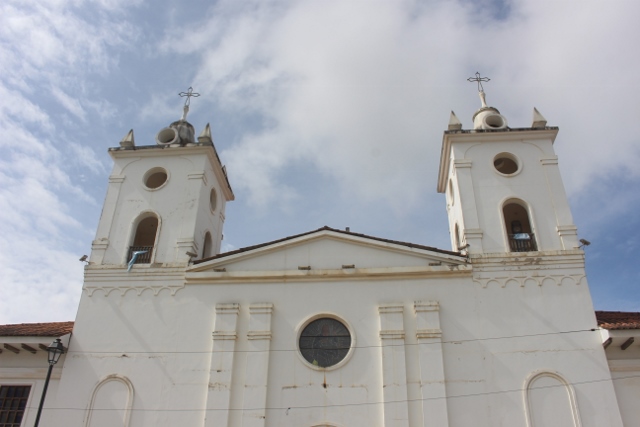 another view of the cathedral

We take a minibus to Huancas, a small village north of town. With the warning that the road maybe closed because of landslides, and we may have to walk a bit to the other side – without suitcases, at least, we left those in the hotel. The road is open, and from Huancas we walk to the Canyon del Sonche, from where we have a fabulous view over the deeply incised river, and the steep mountain slope on the other side. The canon is some 11.5 km long, and up to 962 meters deep. Small waterfalls cascade down in several places. There are no other tourists in sight. At the Plaza de Armas – every village, no matter how small, has a Plaza de Armas in Peru – we wait for a minibus back. When it turns up, we take our seats, and leave. Only to make a round through the village, collect a bunch of school children at various places, and return to the Plaza, once again, fifteen minutes later. To pick up even more children. But then we do leave, really. Until the landslide, which has now become impassable for vehicles, because the people who are cleaning it up are actually making a greater mess of things. Temporarily, we may hope. Everybody out, and through the mud to the other side. The kids are significantly faster than we are, and by the time we get to the other side they have already commanded a waiting minibus, and taken off. We wait for the next one, only to be overflooded with the next bunch of kids, too, from another minivan that can’t cross. All on their way to school, in Chachapoyas. They look at us, tourists, but they are obviously not convinced. It is only that we are bigger then them that we manage to stay on the bus. 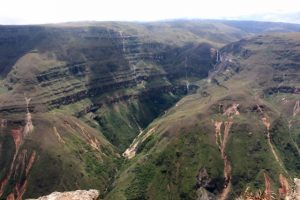 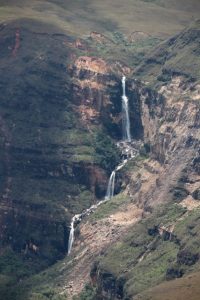 with waterfalls coming down at various levels 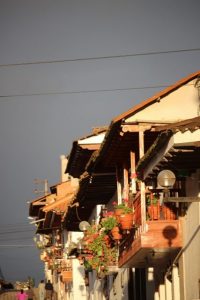 another street view of Chachapoyas 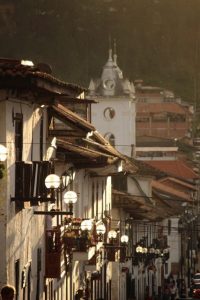 looking down to the Plaza at the end of the afternoon