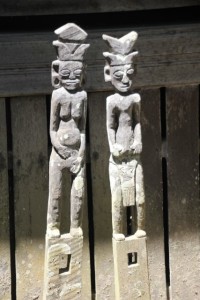 Slightly abandoned Dayak village with a refurbished longhouse, at the edge of a large lake.

Muara Muntai forms the beginning of the Mahakam Lakes District, a series of lakes to the south of the river. As there are no public ferries here, we had hired a ces, an engine-powered canoe, to get to Tanjung Isuy, at the far end of the biggest lake. This is travel at its best: a narrow boat, with purpose-made back support panels, and pillows, under a sun cover, and low cloths on the side against water splashing. A pleasant speed, generating a draft to keep you cool. Raise your camera, and the boatman automatically slows down, point left or right, and the boatman with change course, anticipating you have seen a bird, or something else that needs closer inspection. Remember Mr. Bean conducting an orchestra? Something like that, but then for real! 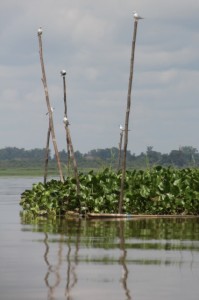 weeds and bamboo poles in the Lake Jempung 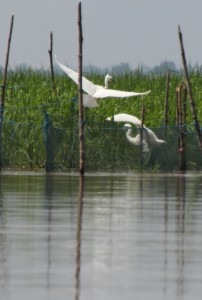 white herons, lazily fishing in the fishing nets instead 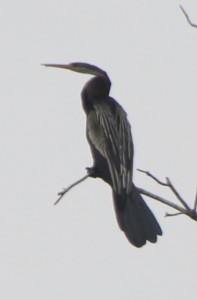 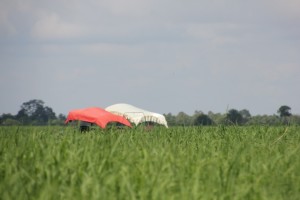 boats trying to hide in the weeds?

We left the main river and entered a fairly wide channel, well endowed with green banks, which after a while ended in the Danau Jempang, a vast expanse of water that apparently supports enormous reed growth. Either the reed had been harvested, or the water was so high that we only caught the top of it, I don’t know, but all that was visible in the water was a green sort of grass or weed, with the occasional bamboo pole in between. Full of many small birds, as well as white and grey herons, feasting on the fishes no doubt. 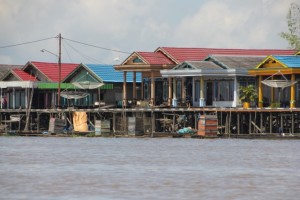 Jantuk, a surprisingly affluent village in the middle of the lake 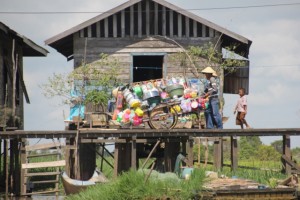 with their own, albeit rolling, mall

Somewhere in the middle of the lake, in the middle of nowhere really, is Jantuk (?), another board walk village along the banks of several channels, all teeming with little boats ferrying people, and school children, back and forth. Here fishing is the main thing, and for the first time we see here the so-called Chinese fishing nets, so common in India and Vietnam – but not in China, as far as I know. Strikingly, this place, like quite a few other villages we would come across, looks rather affluent, with large and well maintained houses. 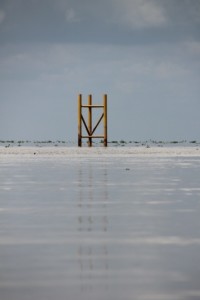 unidentified structure, one of several in the middle of the lake 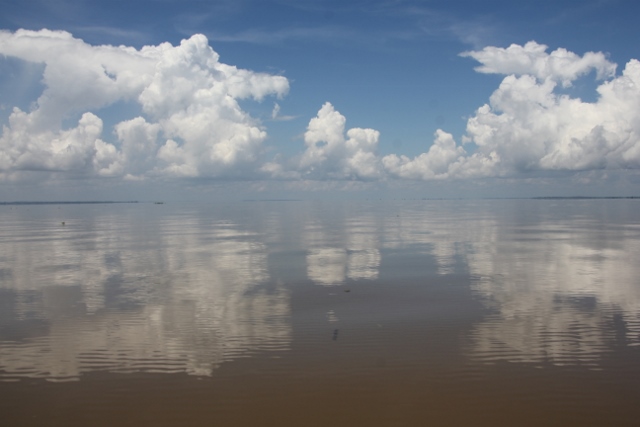 some parts of the lake are really just an expanse of water, and air 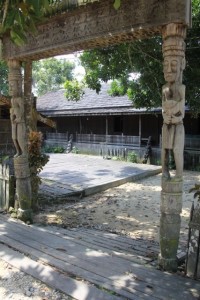 the entry to the longhouse 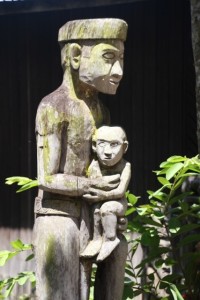 one of the patongs – wooden statues – outside the longhouse

At the far end of the lake in Tanjung Isuy, ready to receive tour groups, or so the guide book makes us believe. We check in in one of the two losmen, guesthouses, which is also a restored longhouse – or lamin, in local language. We are the only guests. In fact, we are the first guests in three weeks, according to the log book. But the longhouse certainly has spare accommodation, there are many rooms! A longhouse is the traditional centre of a Dayak community, shared by many families who occupy a room, or just a part of the longhouse partitioned off with a curtain or something. The tradition is fading, people can afford their own house these days, and many of the longhouses are falling in disrepair. But with government support some, like the one in Tanjung Isuy, have been restored, and given a new life as tourist centre, complete with dance performances and, in this case, accommodation. 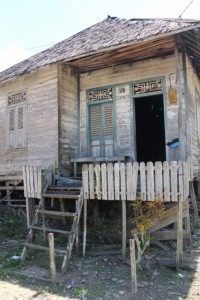 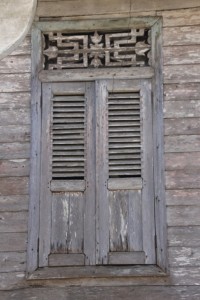 But it is low season, perhaps the reason that Tanjung Isuy looks rather depressive, poorer than Muara Muntai and Jantuk, with many of the wooden houses boarded up, if not falling apart. Only one restaurant is open, so it is grilled chicken for lunch, dinner and breakfast – that’s all they serve. When we want to hire a ces, nobody seems interested, except one guy, who demands an extraordinary amount of money, and refuses to budge. How does that work, supply and demand, if there is only one demanding, and one supplying? Only in terms of guesthouse we are a notch up from Muara Muntai, with mosquito net provided, and cold Bintang Beer available – here the tourist industry credentials of the longhouse are showing.

Yet, not inviting enough to stay any longer than necessary. We beat economic theory by calling our old ces driver from Muara Muntai on his mobile, and arranging for him to come and get us, for the next leg on our trip, Mancong.