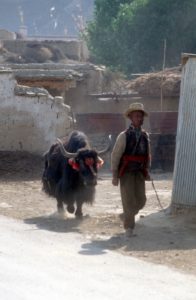 a man and his yak

The scenic southern route past mountain passes and a sacred lake leads to Gyantse, another historic town with a fort, a monastery and a pagoda.

The drive from Lhasa to Gyantse, along the old southern route (rather than the modern ‘highway’ via Shigatse) is spectacular, crossing two passes, one of 4790 m and the other 5045 m high, and the sacred lake Yamdrok Tso in between. If this wide expanse of turquoise water, with no rivers feeding it, ever dries up, Tibet will no longer be able to sustain life, or so it is believed. Whether this was in the mind of the Chinese engineers who built the hydropower station in the lake, is doubtful, but fact is that this is the biggest power station in Tibet – although invisible for the casual passer-by. 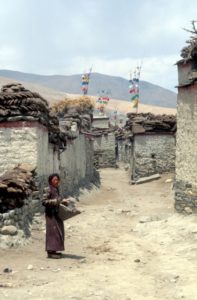 small village on the road to Gyantse

The road is mostly unsurfaced, but drivable, albeit dusty. An enormous mountain, according to our guide well over 7000 m high, snow covered and all, towers out above the rest. In one place one of its glaciers almost reaches the road. Small villages line the route, looking very poor indeed; I wonder what those people are living from. This area is really desolate, there are no trees, there is no vegetation. Yet, sheep seem to find something to eat, still. Subsistence farming takes on a whole new meaning here. 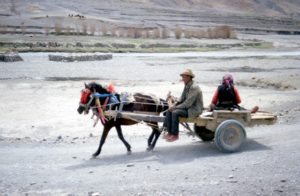 most popular way of transport 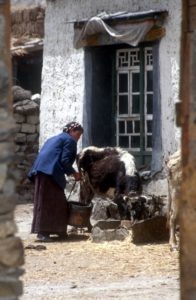 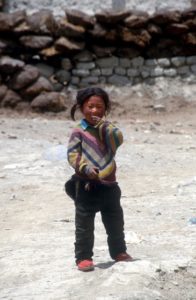 If we thought we were the only ones on this trip, we proved to be wrong. Whilst driving hairpin after hairpin, we could spot the other tourist vehicles as flies in a cloud of dust, creeping forward on the mountain side below and above us, and at every scenic stop we met a horde of Landcruisers. The traffic culminated in the village of Nakatse, where everybody, coming from both sides, stops for lunch. At any one time between twelve and two there are probably more tourists in Nakatse than village inhabitants, yet this has not led to any improvements in facilities, which remain entirely basic. Perhaps Nakatse needs some Chinese influence. 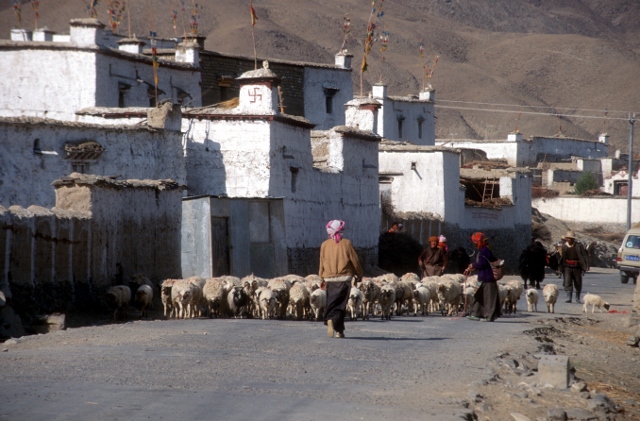 sheep on the highway 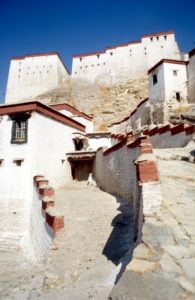 at the base of Gyantse fort 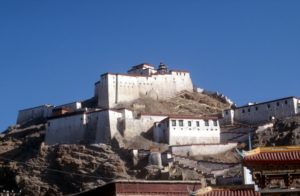 Gyantse is a small and friendly town, which rose to prominence during the British invasion of Tibet in 1904. The spectacular Gyantse fort, perched high on a steep hill in the middle of the town, has largely been restored, after having been damaged by the British. It now supports a ‘Museum of Anti-British’, that pays tribute to the many Tibetan heroes that fought and died in this silly war, which pitched a Middle Age army against modern weapons. 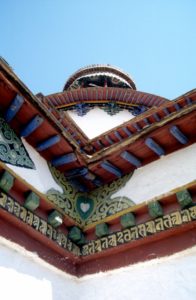 roof detail of the pagoda 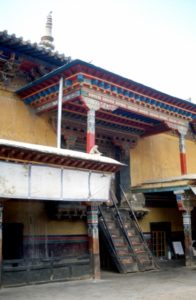 stairs inside the Pelkor Chode monastery 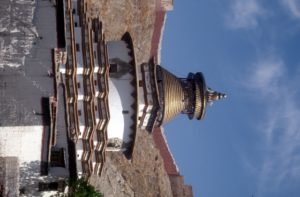 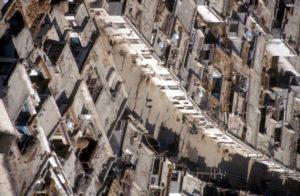 looking down from the fort, the town 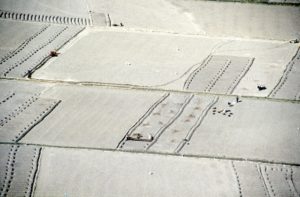 looking down from the fort, the fields 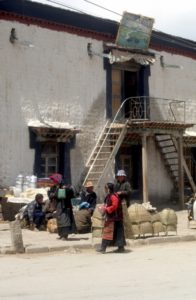 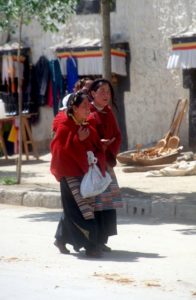 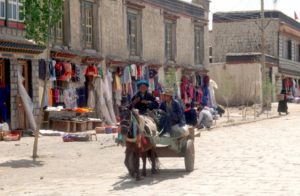 From the top of the fort one has fabulous views over the fields outside the town, which are being worked by local farmers with their oxen, yaks and horses, over the town itself, with is Tibetan houses neatly lined along winding streets and alleys, and over the nearby Pelkor Chode monastery and the Kumbum pagoda. The pagoda is the most interesting building in this complex, originally constructed in the 15th Century. We worked our way up the narrow stairs and ladders of the pagoda, which is nine stories high and supports a large number of chapels, all decorated with beautiful frescos. From the monastery an old cobbled road leads back into town, and this is where Gyantse’s Tibetan street live unfolds. Cows are either wandering around freely, or have been tied to the purposely-build metal hooks in the pavement. Horse drawn carts run up and down delivering goods to the many shops, or potatoes to the potato market, and the occasional rider maneuvers his horse through the other traffic. People have exposed their wares outside their houses in a colorful array of market stalls, and sewing girls are busily repairing garments. It is a bit like China, but not really. 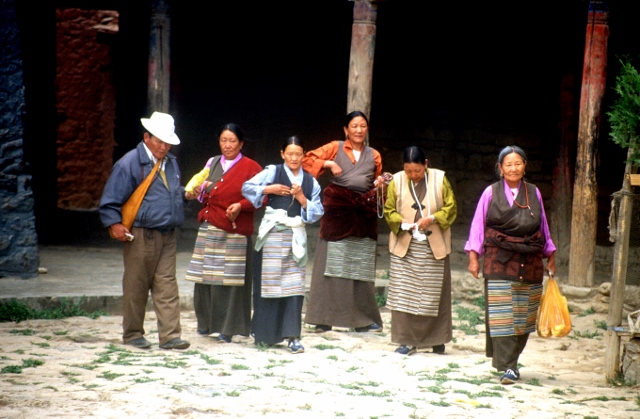 a group of Tibetans in the Zhalu Monastery