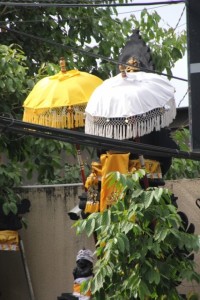 The Holiday Island, much as expected, albeit from a short and predictable stay.

In know, I know. We were not going to go to Bali: too many tourists, too developed, nothing to do with the real Indonesia – you have all heard us saying it so many times. However, with our change of plans, having been slightly disappointed by Kalimantan – not enough spectacle, and people not nearly as nice as elsewhere in Indonesia – we have decided to spend our last few weeks in Sumba, one of the Lesser Sunda islands, located west of Timor. And in order to get there, you need to change planes – no time left for ferry travel anymore, I am afraid – in Denpassar, Bali. Which is where we got off, for a few days, to test our prejudices. 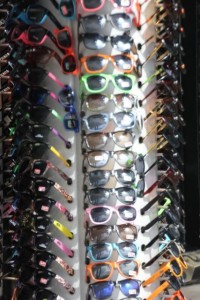 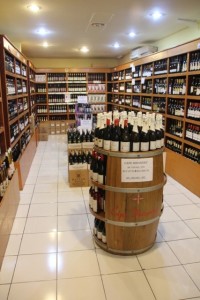 I may be somewhat sarcastic about the shops, but next to all the trinkets, Bali is also the first place where we can buy wine, even have a choice!

We were only going to stay two days, for some beach experience, so admittedly, whatever we have seen from Bali is very limited, limited to the most touristic area only. But hé, how else to confirm those prejudices? We stayed in a place called Seminyak, just north of Kuta, but really, this part of the coast is just one continuous build-up area, seamlessly merging from one village into the next. On the surface, not different from Thailand, Turkey, Tunesia: a large beach, with deck chairs and parasols for rent, with hawkers selling trinkets, and with terraces selling food and drinks; hotels everywhere, interspersed with spa’s, restaurants, bars and café’s. With decent massage parlors when we walk past together, which turn sleazy as soon as I pass by on my own. And with the type of shops so typical for the tourist trade: how on earth these people can survive I don’t know, but all are selling T-shirts, sunglasses, towels, funky jewelry, shell necklaces, hair clips. 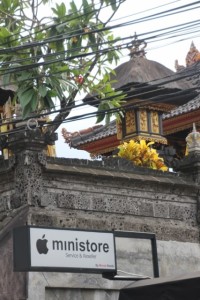 small temple behind the brand 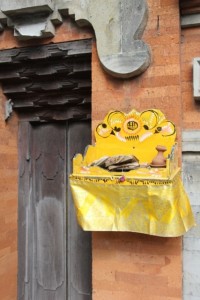 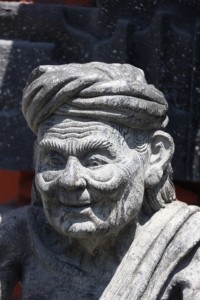 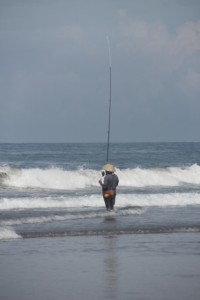 early in the morning, there is nobody, except a lone angler 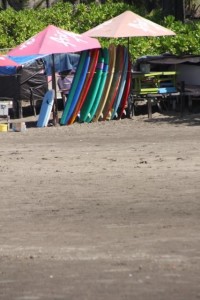 equally, the surfboards are still stacked up 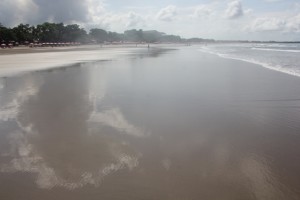 And yet, the one thing different in the streets, even the most touristy ones, are the small altars, on many corners, in front of many buildings. And the temples, many apparently just part of the gardens of houses. Hindu culture is pervasive, many an altar has small boxes with Cambodia flower offerings, or with burning incense sticks. Which, I suppose, means that there are still plenty of Balinese in between the large numbers of import Indonesians seeking their fortune here. Which is another difference from elsewhere in Indonesia: so far I have found the entrepreneurial spirit sorely lacking, wherever we have been, but here in Bali, people do work, and do work hard. No ‘hello Mister’ in the streets, but ‘hello Boss’, from somebody who wants to sell you something – which can be just as irritating as the ‘hello Mister’, after a while, but never mind. And the results are there to see: where many of the hotels we have stayed in, even the more upmarket ones, failed in one way or another – broken shower or no hot water or incompetent kitchen or dirty rooms – competition for the tourist dollar ensures that hotels in Bali do achieve decent standards. And the realization that tourists don’t put up with rubbish means that the streets are clean. So it can be done, higher levels of development are within reach, as long as there is an incentive strong enough to convince the collective.

Still, we haven’t changed our prejudices. Nice to enjoy for a few days, but this is not the Indonesia we are seeking to discover. Back to basics. Off to Waingapu on Sumba. 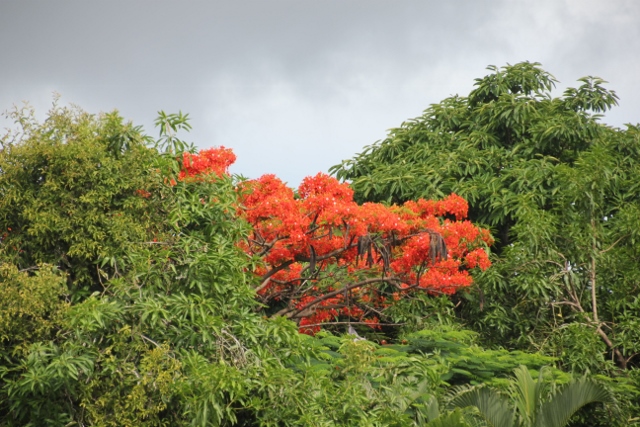 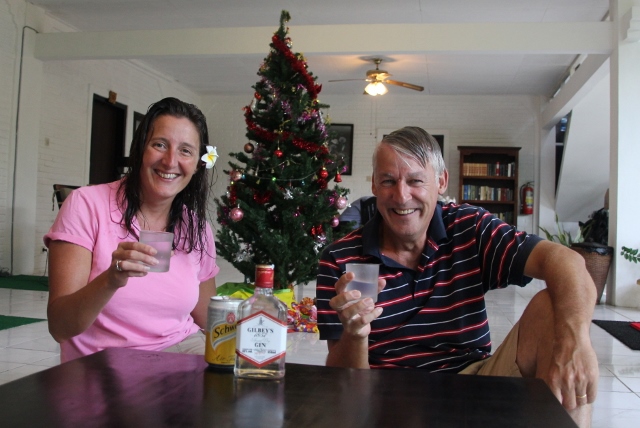 and this is a real gin-and-tonic, in front of the christmas tree