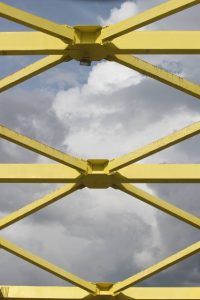 the bridge in Huaraz, halfway our detour

Time is running out, but we decide to make a detour to Huaraz anyhow, for the mountain scenery of the Cordillera Blanco and a unique sculpture museum.

It would be easy to just continue south, through the mostly desert landscape in the direction of Lima, but that would be boring, too. Instead, we opt for a detour via Huaraz, a town initially prominent in our schedule, but because of the many changes, and lingering in other places, now unfortunately scrapped. Except that, with this detour, we may enjoy the approach to the town, which crosses a 4200 meter pass, Paso de Callan, with views over the Cordillera Blanca – the string of snow covered peaks behind Huaraz that has propelled the town to the foremost hiking and trekking centre of Peru. 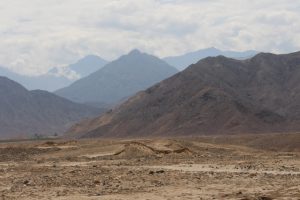 the approach of the mountains, coming from the desert 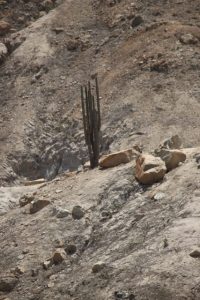 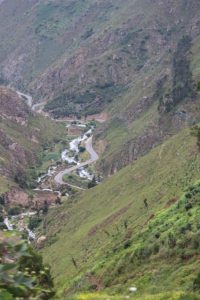 with ascending, we get a view of the rivers 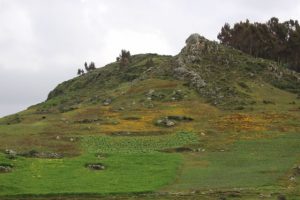 And the road does not disappoint. I manage to get myself in the passenger seat, next to the bus driver, which helps appreciating the landscape – except that the driver is almost more chatty than my regular travel companion, which means that I am frequently too late for that one unique picture, of which there are many. In the timespan of a mere three hours we ascent from near-sea level to the Paso de Callan, after which we drop down as a meteorite onto Huaraz – at 3000 meters only. A not unimportant detail: although much of the Cordillera Blanca is covered in clouds, we, for once, do not cross the mountains in a dense fog. 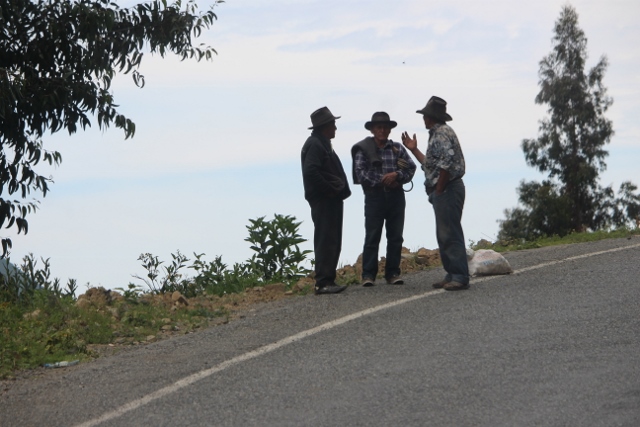 the mountain men, in discussion 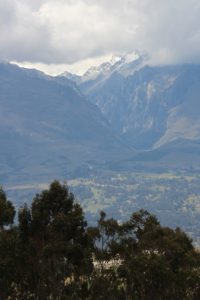 first views of the Cordillera Blanca 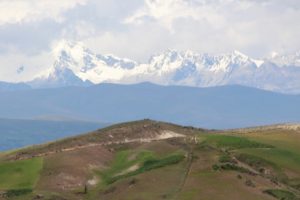 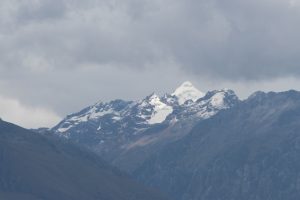 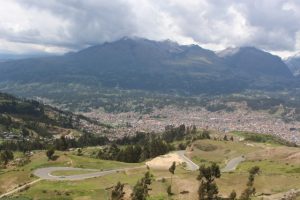 Huaraz is down there, at the end of a meteorite descend 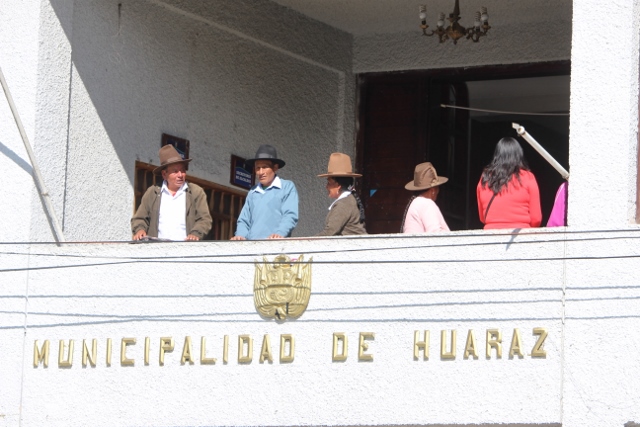 the people of Huaraz 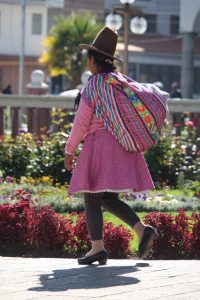 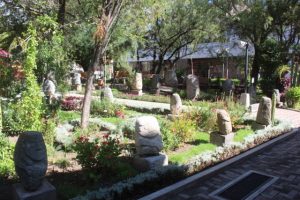 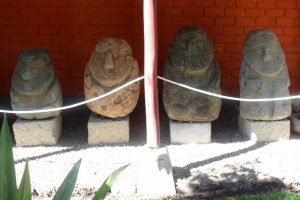 every wall lined with sculptures 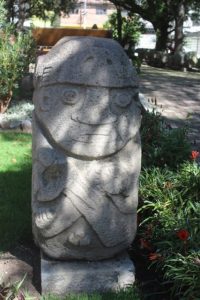 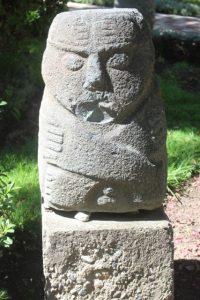 In fact, when we get to Huaraz, the sun shines, briefly. Which makes no difference, because the town itself it utterly uninteresting, ugly even, and with the large influx of tourists, not our favourite place to hang out. However, there is the museum. The Museo Regional de Ancash has, apparently, the largest collection of stone sculptures anywhere in South America – and stone sculptures is one of the many things that has my special interest. Whilst we are here, we might as well have a look. This turns out to be not that easy. We arrive on a Sunday afternoon, and the museum is closed. And on Monday, all government museums in Peru are also closed. Hmm. Time to stay until Tuesday we really don’t have, or we need to sacrifice something else. Tempting, because there are several other sites around Huaraz that would be of interest – which is why the town featured prominently in our schedule, in the first place! But not with only a week left. Next to the museum is an office of the Ministry of Culture, or something, and we decide to walk in on Monday morning. “No, really, the museum is closed, and there is no staff on duty, and it is dark, we cannot let you in”. “But what about the garden?” My travel companion does not give up easily. In the end, an archaeologist who works here turns up, and almost manages to convince us to stay an extra day, and visit the sites around town, too. More importantly, she opens the gate to the garden, “briefly, because in reality you haven’t gotten permission, so I will be in trouble if they find out”, the garden where all the stone sculptures have been exhibited, in the early morning sunlight. Although too short, it is a very impressive visit, wandering in between all those carved stones, mostly upright sculptures from as early as 400 BC to perhaps 1000 AD, that served as guardians to villages, houses, fields and burial tombs during the Recuay and Wari cultures. 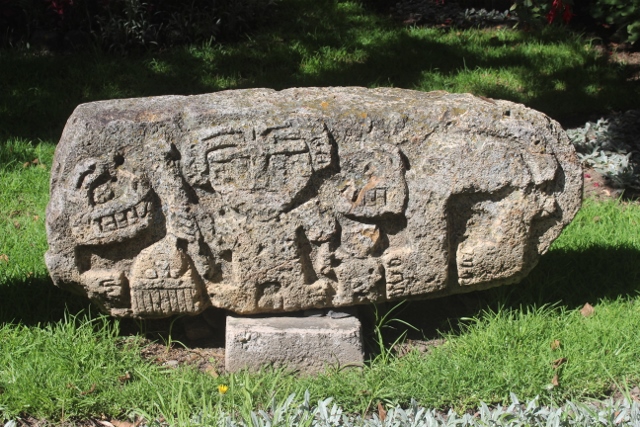 and some group sculptures, too 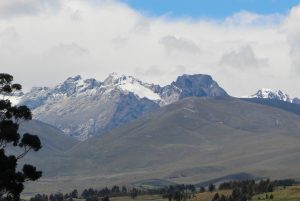 next day, better weather, even some blue sky 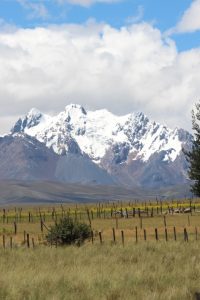 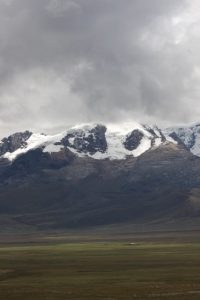 not always against the blue sky 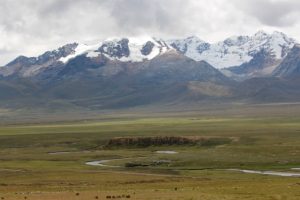 After which we have achieved our number one objective in Huaraz, no need to stay longer (inside the museum is mostly pottery and a few mummies, of which we have seen enough already, this trip). So we find a collectivo, a shared taxi, to bring us, once more over a 4000 meter, or so, pass, once more past the Cordillera Blanca – now much better visible than yesterday – and back down to the coast, to Barranca. Took us two days to get there, instead of half a day, but a worthwhile detour. 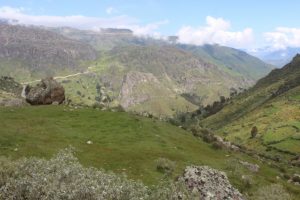 looking down the valley we descend 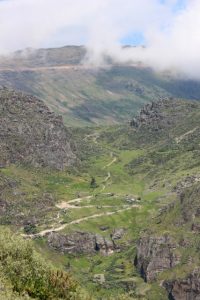 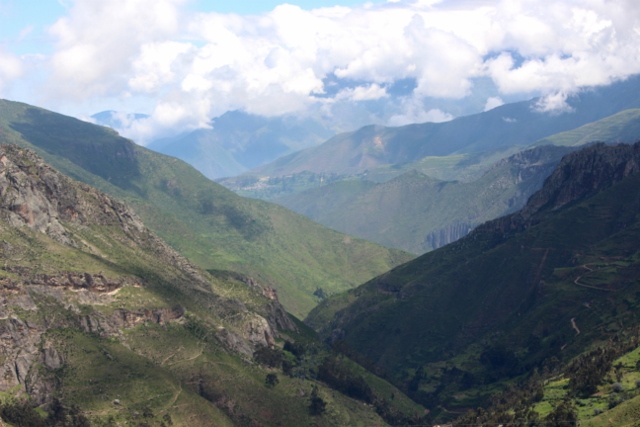 but ultimately a fabulous view