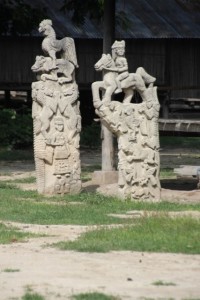 A journey from Waingapu to the South East goes past traditional villages Umbabara and Prayawaign, and ends at a very special cemetery.

An easy trip from Waingapu is a drive to some of the traditional villages in the South East. There is a whole protocol for visiting traditional villages, including bringing presents of betel nut, and subsequently chewing it with the village head, as a sign of friendship, but the villages we visit are already pretty acquainted to the tourist industry. As soon as we arrive, even in the rather unknown entity of Patawan, where we stop because of the traditional houses we spot from the road, the ikat, the local weavings are immediately unpacked and exhibited in the hope of a sale. 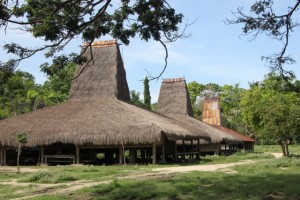 row of traditional houses in Umabara

The traditional houses are characterized by their tall roofs – so constructed for the people to keep their spiritual things high in the roof, closer to heaven and the spiritual world. In the past the roofs would have been thatched, but nowadays many are made of corrugated iron, or tin, but still with the traditional conical shape. The houses are usually built on poles, with a the raised floor made of bamboo and with sufficient space outside for a large verandah. Which always seems occupied by people, of all ages, who have nothing better to do. 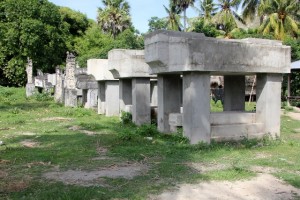 row of tombs in Umabara, the first ones, of concrete, still unadorned, awaiting not-yet-deceased kings

The other two aspects of the traditional village are the tombs, originally huge stone slabs, carved with images that represents the deceased, but these days often made of concrete – much easier, no need to carry –, still decorated with sculptures; and the little totems, wooden or stone sculptures placed next to a house, or in front of a series of tombs, indicating a praying area. I heard the people call these totems patongs, too, like the wooden spirit sculptures in Kalimantan. 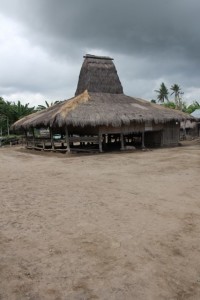 another tall roof, outside Umabara 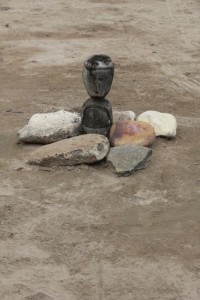 in the village square, a sculpture surrounded by rocks: the praying area 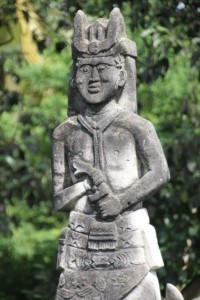 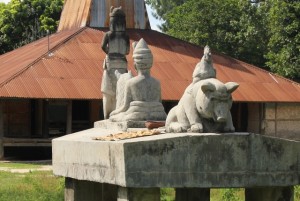 everything goes, as far as tomb decoration is concerned

The best-known, and most-visited villages in the South east are Umabara, in the district of Pau, and Prayawaign, a kampung in district Rende. Both have visitor books, where upon signing a donation for the village is expected – a much better idea than bringing betel nut, a kind of drug that works as a mild stimulant, but as a side effect ruins one’s teeth and turns one’s mouth and lips a horrible black (another reminiscence from Papua New Guinea, by the way). Both villages also have a fair amount of ikat for sale, which, judging from the many hand looms, is indeed locally woven. Not our taste, though. 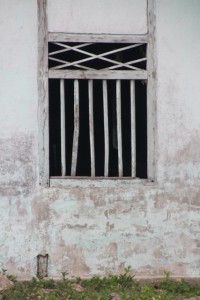 not all the houses are traditional, this is just a window 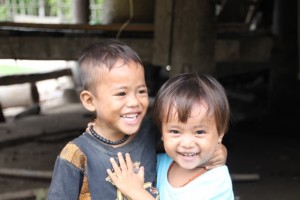 two of the future kings and queens, perhaps?

Umabara is the more authentic village, despite visitor book. A couple of traditional houses, very tall, still have thatched roofs, and in front are several big tombs for Rajas, or kings, consisting of raised and decorated stone slabs. The lesser people have been buried behind these, and just got a slab, no decoration, no support poles. Half of the fun is actually getting out of the car and walking back, an hour or so, to the main road, zig-zaging in and out of the other kampungs, observing village life and exchanging whatever we manage to communicate; our Bahasa Indonesia is already limited, but many people here only speak their local language, lost even on my travel companion. 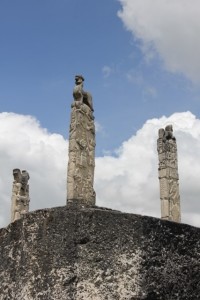 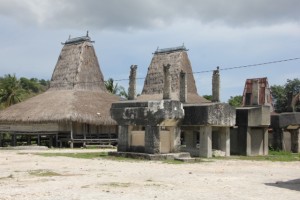 traditional houses and tombs in Prayawaign 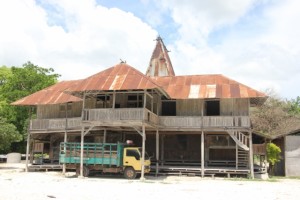 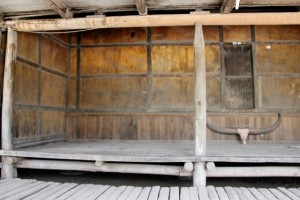 and the king’s walls, of buffalo hide 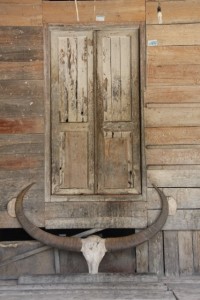 door decorated with a buffalo skull and horns

Prayawaign is more organized, it seems. A well maintained kampung, with traditional houses on both sides of the central square, where the tombs have been lined up: equally large decorated slabs of stone, interspersed with concrete structures. We wonder whether these houses are actually inhabited, or just maintained for tourists, but the children arrive from school, dropped by a truck, and they do disappear into various houses: this is really how the people here live, so much is clear. One house stands out, in a corner of the square, a fabulous two-story wooden structure with several connected living compartments, some with walls of buffalo hide. This house is closed, however, the king to whom it belongs is elsewhere.

We have another few targets for the day, a fishing village and a cemetery near the town of Mburukulu. Town is actually a big word, when we stop along the road at a kiosk to buy some water, the first kiosk we have seen for an hour or so, this turns out to be Mburukulu. The fishing village can only be reached by motorbike or walking, the road is too bad for a car, but the cemetery, yes, just down the road. But why do we want to go there, there are no people? Having explained our somewhat morbid interest in tombs, a woman jumps on her motorbike and tells us to follow her; on the way she picks up another woman, and together they guide us to the place, called Okawatu. There are supposed to be some 160 people buried here, but we only find a few tombs back. It is an eerie location, surrounded by a wall on the verge of collapse, overgrown with trees, quite beautiful. And peaceful, indeed, there are no people, other than us. 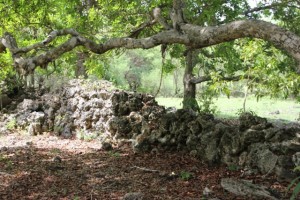 the wall surrounding the cemetery of Okawatu 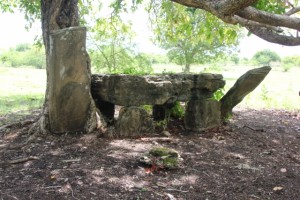 tomb just outside the Okawatu cemetery 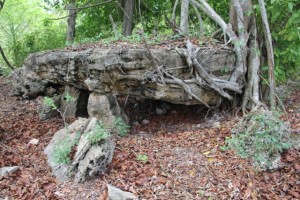 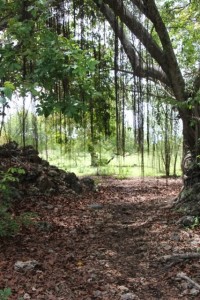 it is a special area, special atmosphere

Communication is fraught with misunderstandings, but as far as we get it, this is a cemetery no longer used, because once the king was buried here – with his disciples, or his slaves, or his wives, who killed themselves after the king had died, to be buried with him -, the place was off-limits for further burials. Not for grave robbers, though, who plundered the tombs thoroughly. It remains unclear how old these tombs are, there is some reference to Dutch colonial times, but somebody else mentioned the 1950’s. One of the slabs of a tomb is overgrown by roots from the nearby tree, which must have taken a while.

There is no time left for a walk, or an ojek ride, to the fishing village, and we make our way back to Waingapu to arrive before dark. Something different again, today.

next: towards the center of the island