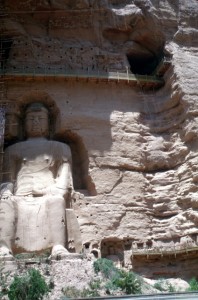 the Buddha at Bingling Si

An excursion to the Bingling Si Buddhist cave complex and the sleepy Muslim town of Linxia. 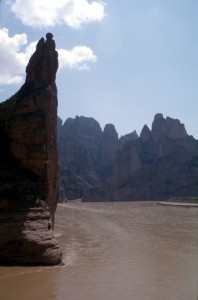 the boat ride to Bingling Si

The next day we went to Bingling Si, touted as one of the four most important Chinese Buddhist cave complexes (many more than four complexes are touted as one of the most important four…). The caves are located in a spectacular setting, up a steep river valley of one of the tributaries of the Yellow River. A visit requires a few hours drive, and another hour’s ride in a speed boat, leaving only about 1 1/2 hours to look around before the boat turns around again. Some 183 caves remain, all numbered, however, we soon found out that even the shallowest hollow is counted as a cave. Very unfortunately, a number of more famous caves were temporarily closed for repair. The few that were opened for us especially, after having paid an exorbitant amount for ‘special ticket’, were relatively small, and not very inspiring. Yet, the complex of caves is definitely worth the visit, not just because of the scenery one encounters on the way, but also because of the caves themselves, which through their inaccessibility have been spared the attention of the Red Guards of the Cultural Revolution. 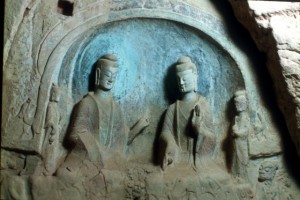 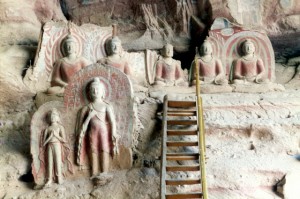 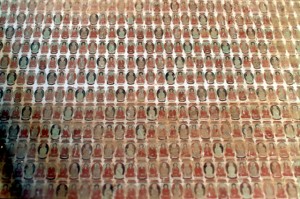 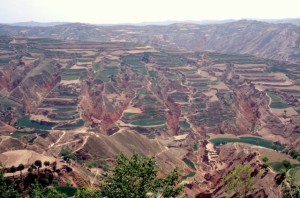 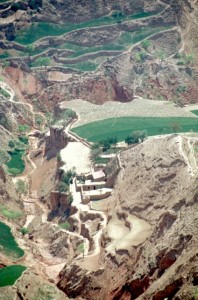 From Bingling Si we proceeded to a place called Linxia, through some of the most dramatic country side we had seen so far, and with every hill, as far as the eye could see, terraced to the top. Linxia itself has not much to offer, it is a sleepy Muslim town. However, for no apparent reason it has a string of souvenir shops, or rather, tourist shops selling art, antiques and artefacts. What is also suspicious, is that as soon as you show some interest in Buddhist art, the doors are being closed, often locked, and from all corners appear old painted cloths and bronzes, of a different quality altogether from the pieces exhibited openly in the shop. Obviously these things cannot see the light of day, and one can only speculate about their origin. Relics from the Cultural Revolution, perhaps, which have been hidden ever since, waiting for opportune moments to be sold? Linxia’s other trade mark is the nearby spectacles factory. In Lanzhou we had already observed the conspicuously large glasses worn by people, both as normal glasses and as sun glasses, and these are being produced in Linxia. Brilliant pieces, very heavy, poorly finished, but definitely something different. And the people of Linxia are proud of their product, no self-respecting man goes over street without his glasses. 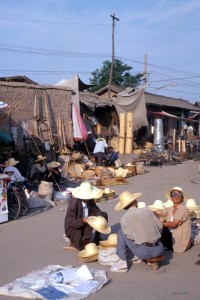 the sunglasses of Linxia

We found a fabulous hotel in Linxia. Having selected the most luxurious room, we got a ball room, with wood panelling all around, two different sets of plastic-leather sofas, glittering, silver-shining bed and pillow covers, and an in-suite, rather than an en-suite, bathroom: a mirrored cubicle in the corner of the room, containing a toilet bowl, a washing basin and something resembling a shower. We also had a television – but that you get in every hotel in China -, and, the pride of the hotel owner, a small fridge. The fact that is was not connected, because there was no socket, is of minor importance compared to its presence. And for this incredible room we paid the sum of US$ 8, for the two of us.