Part of the fun traveling is trying to understand another country, another society, and books are an integral part of that learning experience. There is history, there are opinions,  and there have been others traveling – their views are often equally interesting to read (as compared to mine, of course). Below an incomplete selection from my personal library. 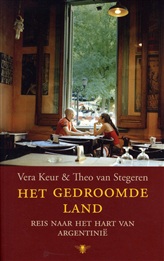 1. I enjoyed reading “Het Gedroomde Land” (2012) by Vera Keur and Theo van Stegeren, two Dutch journalists who spent over a year traveling in Argentina. Rather than a travel book, though, this is more a book about Argentinean society, sketched through a variety of more and less serious historical anecdotes and myths. I don’t believe the book has been translated in English, or Spanish, for that matter, which is a pity. A more expanded vision on the book, and how I think it compares to present-day Argentina, can be accessed here. 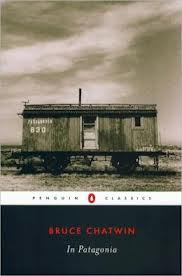 2. One of the earlier travel books about the south of Argentina is “In Patagonia” (1977) by Bruce Chatwin, who traveled the area in the early 1970s. He visits mostly fellow-British immigrants – he seems to have looked up almost every Englishman, Welsh and Scot in Patagonia – and tells of their lives, their histories. In the process he also comes up with other little-known gems, like the latter-day adventures of Butch Cassidy and the Sundance Kid, who exchanged criminal life in North America for Patagonia when police and detectives in the former got too close on their heels. Or the Chilean workers revolution of the 1920s, which ended in the wholesome slaughter of bandit-turned strikers by the Argentine army, a solution heartily supported by the British sheep-farming community in Patagonia. Or, my favourite, the establishment of the Kingdom of Patagonia by a French lawyer in the 1860s, who set off to head the Chilean Araucanian Indians in their struggle against the Argentinian Republic, and whose descendants still make a modest claim to the throne. The journey ends in Punta Arenas in Chile, where one of Chatwin’s grand-family established a business round the turn of the 20th Century, and was involved in the search for the last living mylodon – a type of a sloth that died out some 10,000 years ago -, another one of those entertaining stories. Despite the presence of these tales in the book, Chatwin’s is a little short on observations and a little long on Britishers, and all kind of other immigrants’ stories – but perhaps that is the reality of Patagonia. 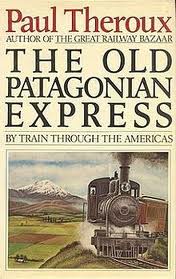 3. I am not a great fan of Paul Theroux, and make no exception for “The Old Patagonian Express” (1979), the account of his journey, as much as possible by train, from Boston south to the Argentine Patagonia. His travel accounts are more about himself than about the places he encounters, and if he observes what happens around him at all, his comments are often somewhat condescending. You wonder why he travels at all. The Argentinean part of the book covers the last 90 of 430 pages, and is mostly of interest because it describes the train travel from the Bolivian border to Buenos Aires, and then on to Esquel in Patagonia, in trains that have long ceased to operate – except for a small narrow gauge circuit outside Esquel, which is being run as a tourist attraction, these days. 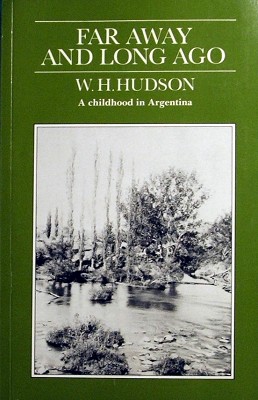 4. A classic is “Far away and long ago” (1918), the childhood memories of W.H.Hudson, of life in and around Buenos Aires in the middle of the 19th century. Hudson is, occasionally, a little heavy on description of nature and birds, but is at his best painting the Argentine society, the immigrants, the gauchos, the dictator Rosas, and all other things related to the people (or perhaps that is a personal preference). A great read for those who seek an accompaniment to the standard history fare that is available about Argentina.

5. A second classic from W.H.Hudson – who was born to British parents in Argentina, but left and settled in the UK at relatively young age, never went back, and wrote all his books in English, yet is celebrated in Argentina as the great Argentine author, Guillermo Enrique Hudson –  is the account of his travels to Patagonia, “Idle Days in Patagonia” (1893). I am trying to obtain a copy. 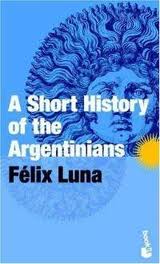 6. The standard history fare is excellently summarized in “A Short History of the Argentinians” (2000), by respected Argentine historian Felix Luna. The biggest limitation of the book is that it deals with the history until the collapse of the Peron government in 1955, and thus omits Peron’s return in 1972, and more recent, equally significant events like the military coup of 1976, the subsequent dirty war, and the change-over to a democratic system, with all its flaws.

We are carrying the First Edition of the Lonely Planet’s “Travel Survival Kit to Argentina, Uruguay and Paraguay” (1992), by now rather obsolete as a travel guide, but entertaining to compare how things have changed in 20 years. We also have the “Frommer’s Argentina” (2011), more of a hotel and restaurant guide than a travel guide, and rather focused on rich Americans, not particularly useful for the independent traveler.