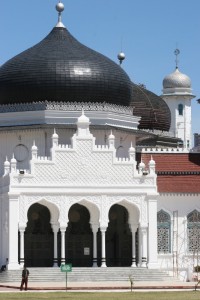 the most impressive building is the Great Mosque

There are even a few historical sights In Banda Aceh, a minor tourist attraction

Despite being a rather small town, and despite having been further reduced in size by the tsunami, there are still some interesting historical sites in and around Banda Aceh.

The obvious place to start is the big mosque in the centre of town. The original mosque, the Mesjid Agung or Great Mosque, was built on the site in 1692, during the rule of Iskander Muda, one of the great sultans of early Aceh. The Dutch burnt the place down in 1874, but realizing that they hadn’t particularly won the hearts of the Acehnese by doing so, offered to rebuilt it. So in 1881 the current mosque, the Baiturrahman Grand Mosque, was completed, an impressive structure to which over time more domes, and more minarets were added, to its current total of seven domes and eight minarets. 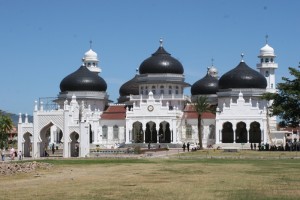 no less than seven domes and eight minarets, added over time 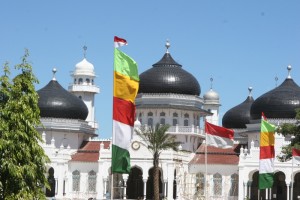 often the outside is decorated with colourful flags

Perhaps the more famous mosque is the Rahmatullah Mosque in Lampuuk, just outside Banda Aceh. This was the mosque that was frequently photographed after the tsunami, as the only building having withstood the force of the water in this part, fierily standing upright in between the rubble and the debris that was left of everything else around it. 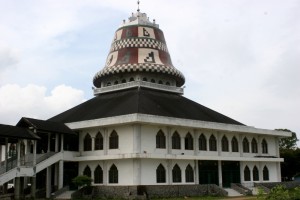 another characteristic building is the Bell Mosque

There is little that remains from the powerful Acehnese Sultanates of the past. One building that stands out, though, is the Gunongan. Apparently, this used to be the bathing house and pleasure gardens specially built for Sultan Iskander Muda’s wife, a Malaysian princess. It is now a public park, everybody can freely walk in; it is covered in rubbish – no photos, I am afraid. Nearby is the so-called Bell Mosque, on account of its bell-shaped roof. 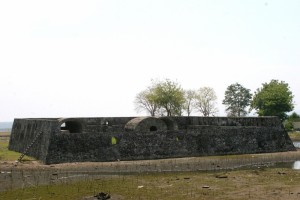 I have mentioned the beaches around Banda Aceh already. Along one of them, to the north east of the town, are the remains of an old fort, Benteng Indra Patra. It is claimed that the fort dates from the 7th Century, from before the arrival of Islam in Aceh, although what is left today certainly doesn’t look that old. Neither do the concrete bunkers that have been built along the beach, here. 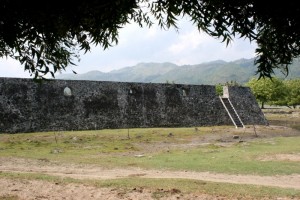 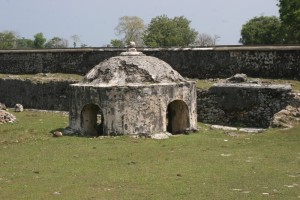 inside are several structures, not necessarily clear what for 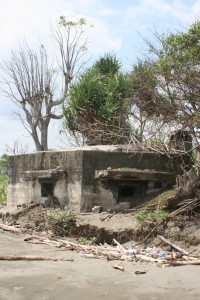 also, near the fort, the coast is protected by concrete bunkers, no doubt more recent than the fort itself 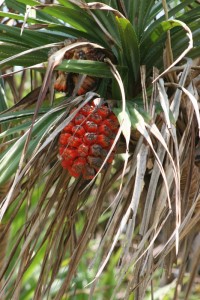 and in between all the concrete and stone grey, some colour 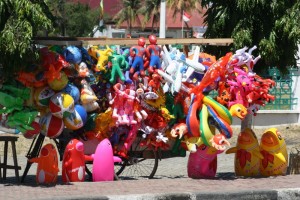 outside the mosque, plastic toys being sold

Of course historical buildings are not the only attraction in Banda Aceh. Like every self-respecting Indonesian town, it has a market, a large covered bazaar just behind the main mosque, but also innumerable stalls in the streets, selling everything from fruit and vegetables to plastic toys.

And just sitting along the road, and watch the spectacle of people pass, is equally entertaining. The one thing that has astounded me, ever since I arrived in Banda Aceh, is the enormous resilience of the Acehnese people. They have been fighting for their independence for hundreds of years, most recently they have been fighting what amounts to a civil war with the Indonesian army for 30 years, and then a large part of the population was wiped out by the worst tsunami the world can remember, affecting each and every family I have spoken to. And yet, the Acehnese have picked up their lives again, picked up where they left it, or perhaps a few steps back. And you see it, in the streets.

and this sums up the frustrations of the young