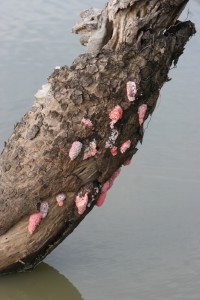 aquatic life in a lake behind our house

Our first challenges, those related to housing and shopping, we managed to overcome fairly easily, despite bringing a dog to a devout Muslim area

The biggest challenge we faced coming to Banda Aceh was that we were traveling with a dog. A dog is ‘haram’, unclean, in Islamic societies, and as I mentioned above, Aceh, with its Sharia law, was clearly a devout Islamic society.

So for the first few days my wife stayed back in Jakarta, with the dog in a kennel, to give me some time to identify a place to live. And indeed, I managed to locate a temporary place for us to stay, from the Wednesday onwards. But when wife and dog traveled to Banda Aceh on Wednesday, the rental contract got canceled again, and we had to find an alternative. This proved difficult, but in the end we did locate a guest house ready to welcome us for a night, with dog and all, but only if we would be arriving after dark – so that the neighbours wouldn’t see that we brought a dog into the house! Yet, they had dogs themselves, who stayed outside, and they did care for the dogs. One was hurt, at one of his legs, and the son of the owner was trying to bandage the cut, but without touching the poor animal – who obviously had other ideas about being bandaged in! My helping hand was well appreciated, and was the least I could do to repay the kindness of the family to allow us to stay for the night. 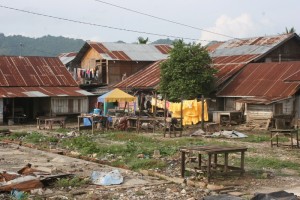 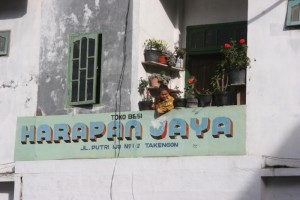 woman looking from her balcony

Dogs in houses proved to be a touchy issue all the time. At one stage we had identified a nice house, perfectly located, good security, good water and electricity infrastructure, ground floor only (safer in case of earthquakes), spacious garden, and we had already agreed on the – rather hefty – rent, when the owner realized we would bring the dog inside, upon which the deal fell through. Having learned from the experience, we now mentioned the dog upfront, which turned out to be a frequent deal blocker, but at least saved us lengthy negotiations for nothing. Ultimately, we found a place where the dog was allowed in the garage, which was connected to the house by a door that didn’t close – a suitably face-saving solution for the house owner, who also perfectly well knew that the dog wouldn’t be confined to the garage. 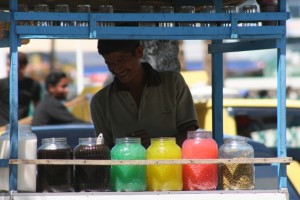 The first shopping expeditions were another adventure with a steep learning curve. Initially we focused on the Chinese supermarkets. These shops have everything one needs to survive, really, although sometimes one needs to look hard to find it. Quite soon we learned that by smoothing up to the cashier when there is nobody around, and whispering that you would like ‘two bottles of white, please’, a good five minutes later a small boy turns up with a brown paper bag with something in it, which he insists on putting directly in your car. Back home this turns out to be, indeed, two bottles of white wine, of completely random origin – French, Chilean, most often Australian – and always the same price, 15 US$. The same cashier also turned out to be able to deliver red wine, gin, whisky, and even beer, once again random brand: could be Budweiser, Foster’s or Mexican Corona, for instance, or anything else. A major step forwards came when my wife started a conversation in Chinese – she speaks quite a few words in Mandarin -, which obviously improved the confidence level such that she was from then on allowed to accompany the boy into the warehouse, and select her own beer and wine, reducing the ‘random’ factor of our alcohol shopping significantly. 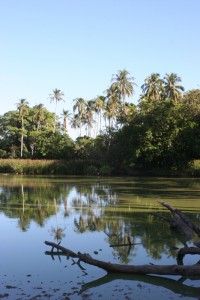 the lake behind our house

Later on we found the shops that specialize in imported goods, several ‘French’ cheeses from Australia, luxury condiments for pastas, Haagen Dasz ice cream etc. Dogfood, not unimportant, although a dog is also perfectly happy with rice and left-overs. And we found the millions of pirated DVDs, in the market stalls along the streets. And the cheap electronics, like the US$ 15 DVD player to watch all those illegal copies – imagine your DVD player for the cost of a bottle of wine! And the department store, the only one, with all the nylon and lycra cloths, totally unsuited for the tropical climate here, but nevertheless incredibly popular. In any case, the largest XXL size shirts didn’t even come to more than three-quarters of my torso, so for me Indonesian fashion wasn’t an option, anyhow.

And we increasingly found our way in town, to the main square with food stalls, serving  various types of sates (charcoal-grilled skewers) and martabaks (well-filled omelets). To the various restaurants with excellent food, Chinese and Indonesian; to the covered bazaar, to the main mosque. And to the fishing boat that had landed on top of several houses, hundreds of meters from the coast, a reminder of the force of the water that ravaged much of this city on Boxing Day 2004.

However comfortable our life was, you couldn’t escape the reality of recent disaster, there were traces of it everywhere. And one wonders whether this will ever completely disappear.