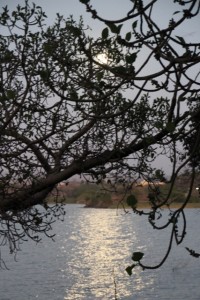 Bahir Dar is the gateway to Lake Tana, the source of the Blue Nile, and close to the now no-so-spectacular-anymore Blue Nile Falls.

Bahir Dar has two claims to fame, all to do with its position on the shores of Lake Tana. Firstly, the lake is considered the source of the Blue Nile (fyi, Lake Victoria is the source of the White Nile, and white and blue join forces in Khartoum, in Sudan). The outlet of the Nile from Lake Tana, the start of the river, is a rather underwhelming sight, but photos from the Falls some 30 km downstream, at Tis Abay (which means Smoke of the Nile), also called Tis Isat (Water that Smokes) are more impressive. Here the water drops 45 meters, along a vertical cliff of basalts. 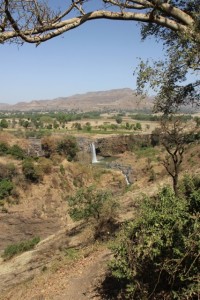 the Blue Nile Falls from a distance 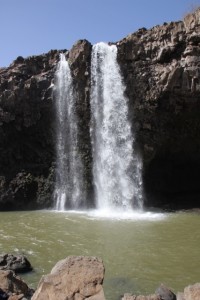 this is really all there is to the Blue Nile Falls, in the dry season

Unfortunately, since the installation of a hydro-electric plant the vast majority of the water is being diverted, and appears again a little further downstream, from a massive pipe system. If you then also turn up in the dry season, as we did, much of what can be seen on tourist brochure pictures isn’t there anymore. All reference to smoke in the name of the village, in the form of a large spray of water, is thus pretty obsolete. But don’t get me wrong, a visit to the site is still a very worthwhile undertaking, and allows for a pleasant 90 minutes walk. And we even got a little wet, very little, right in front at the bottom of the falls. 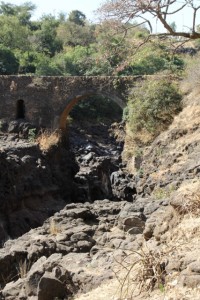 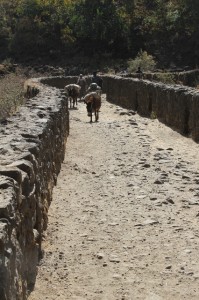 donkeys on the bridge 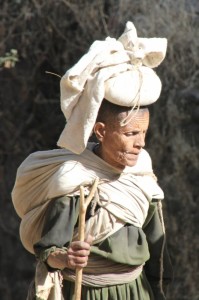 The walk includes crossing what it called the Portuguese Bridge, thought to have been constructed by the Portuguese in 1620, when they had a presence at the court of the Ethiopian emperor. Or perhaps, as some sources claim, the bridge has in fact been built by Ethiopians, but because the average Westerner found it difficult to believe that Africans would have been capable of something like this, they assumed that it must have been the Portuguese. (Similar assumptions have been made, and proven wrong, with the ruins of Great Zimbabwe, and with Bushman rock paintings in Namibia.)

The second reason to come to Bahir Dar is that it is an excellent base for exploring the various monasteries on and around Lake Tana, subject of a separate entry.

Bahir Dar itself is a little disappointing, despite it obviously great ambitions. The town has a number of huge avenues and round-abouts, so far vastly overdesigned for the amount of traffic, and is also building an enormous football stadium and several luxurious tourists resorts. Whether this grandiose view of the future is justified, remains to be seen. 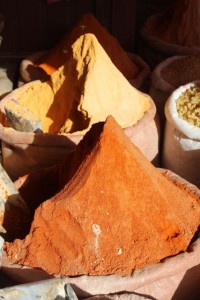 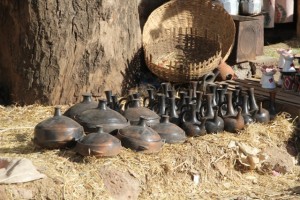 cooking utensils for sale in the market

The market certainly hadn’t received a modern make-over yet, and was your usual collection of dusty stalls and selling from a blanket. Strangely, not very photogenic, in part because, at least when we got there mid-afternoon, anybody in traditional cloths had left already. No shortage of mean-looking young men with an unusual and persistent interest in our pockets, though – or are we becoming paranoid? 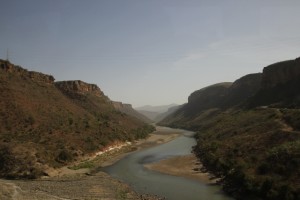 crossing the Blue Nile, deeply eroded in the volcanic landscape, on the way from Addis Ababa to Bahir Dar