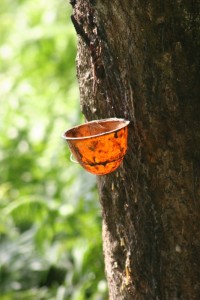 From Medan, Sumatra’s largest city, to the Orang Utan sanctuary in Bukit Lawang and on to Berestagi, the domain of the Karo Batak and their traditional wooden houses 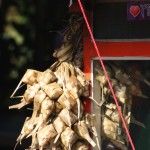 Close to Banda Aceh, Indonesia’s 3rd or 4th largest city, Medan, is mostly large and unattractive, never mind that it offers some of the comfort and facilities that Banda Aceh lacks: restaurants, super markets, cinemas etc.  The city’s mosque is a mosque like so many other mosques, and the variously called Maimoon castle or Maimoon palace, the old sultan’s residence, is in fact a rather large house, no doubt attractive at its time but now pretty run-down. Although the city still has a provincial feel over it, with the airport almost inside, and very little high-rise, shopping malls are taking over and traffic is becoming the chaos one expects from a large Asian city, albeit still dominated by rickshaws and becaks, as well as the usual army of motorbikes. Yet, the center of Medan is in fact very small, somehow stimulating becak drivers to try to drive around it several times, creating the impression of large distances, and the expectation of a higher fee. 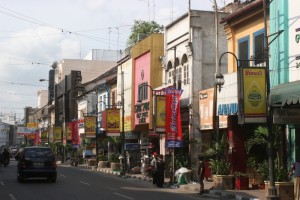 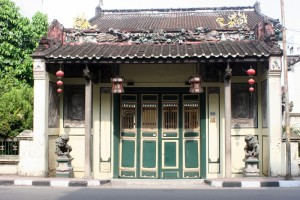 Chinese Mansion, another landmark in Medan 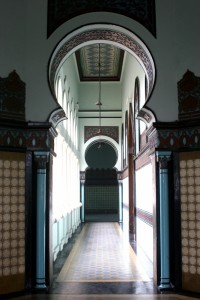 one of the corridors in the Mesjid Raya in Medan 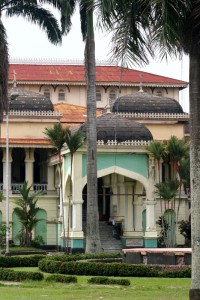 Maimoon Palace, Medan, the residence of the former sultan 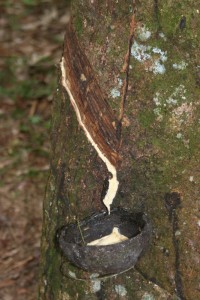 rubber flowing in a coconut, with the pace of a glacier 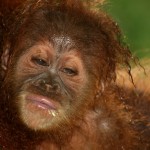 Bukit Lawang is a three hour drive from Medan, mostly through unattractive country side, but for the last part through palm oil and rubber plantations. The plantations are enormous, thousands of trees having been planted in row after row – a bit like the cemetery, really -, but the future of rubber must be bleak, judging from the glacial pace at which the stuff drips into the half coconuts, and in the more advanced cases the plastic cups, that have been installed at the bottom of a pattern of incisions to collect the stuff. 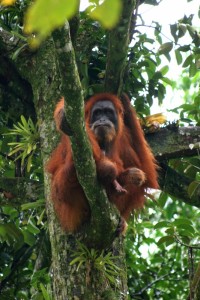 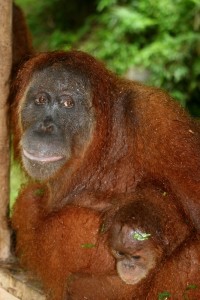 another Orang Utan, with young

Bukit Lawang’s only claim to fame is the Orang Utan reintegration program, which used to prepare apes rescued from captivity – mostly from domestic use – for the wild again. However, the program now has lost its funding, and in order to generate money has turned to tourism. Of course, tourism has been made a lot more difficult after the Bali bombings, and more recently, and Bukit Lawang-specific, after massive flooding of the river that runs through the village, destroying homes and hotels. New government housing is coming up on higher grounds, not unlike the Aceh tsunami houses, but tourist-related private enterprise is still in the doldrums.

A visit to the Orang Utan Rehabilitation Centre is a delight. First day I did not get further than the ranger’s house, where we took shelter from the rain – and so did the apes, four large adults and two youngs, clinching desperately to their mothers. All enjoyed the cabbage, carrots, pineapple and whatever the rangers had brought, and the small ones got extra milk and vitamins. Having these animals right next to you is quite an experience, they look at you as if they, somehow, recognize that you are somewhat familiar. And their features are familiar to you, no doubt, delicate hands and feet, clear faces. Worth the soaking I got, as just when I crossed the stream in the dug out canoe it started pouring down – glad I didn’t go all the way up to the feeding platform, what I did the next day in dry weather, a steep climb no doubt very slippery in heavy rain.

Nearby bat cave was not nearly so exciting, also because contrary to expectations there were no bats in this cave, but the short hike through plantations and jungle was nice enough, and so was the scrambling into the cave. Just as wet as earlier during the day, but this time from transpiration, not the rain. 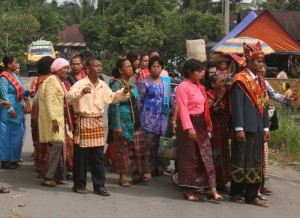 the groom and his family arriving 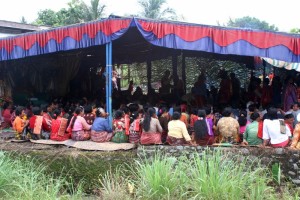 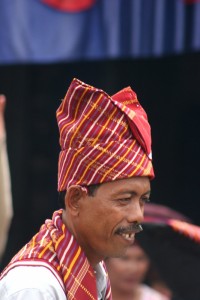 and one of the male guests 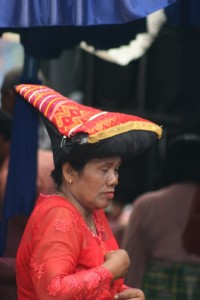 well-dressed guest at the wediing

To get to Berestagi, the first real touristic town, one needs to backtrack to Medan, but you can avoid the town by taking the ringroad, a somewhat exaggerated name for a two-way street, in parts even single lane as works are ongoing. Highlights were the Batak wedding we encountered on the way, and the crocodile farm along the mentioned ringroad, a ghastly collection of hundreds, if not thousands of crocodiles, either in the shallow pond, or literally stacked on top of each other in individual enclosures. 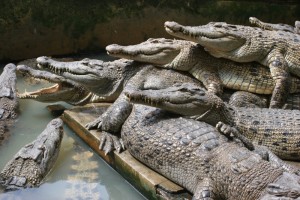 crocodiles stacked on top of each other 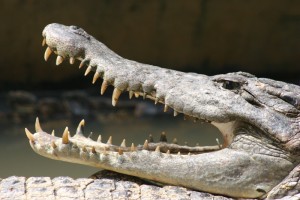 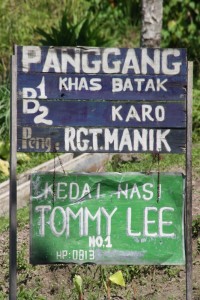 B1 & B2 advertised, here near Balige

Outside Medan there are also many fancy hotels, for ‘check in, check out’, according to my driver, which some moments later he explained as prostitution – and then he almost drove into the back of a car, day dreaming perhaps. As a good Muslim he clearly disapproved of this, but he did know the exact room rate, no less than 35,000 Rupias – 4 US$ -, and he also pointed out the cars and motorbikes that were on their way to such hotels, somehow there was something obvious in their attitude that I did not get, or perhaps it was the passengers.

Another piece of interesting information, also anathema to good Muslims, was the revelation that in this part of the country one can eat B1 or B2, as it is humbly signposted. B1 is biang, Batak for dog, and B2 is babi, Bahasa for pork. The Bataks that inhibit this part of Sumatra are largely Christian, in fact one sees plenty of churches, Protestant as well and Catholic, often right next to the local mosque. 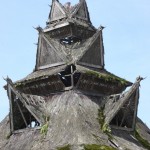 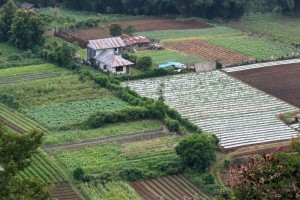 the land between Medan and Berestagi is very fertile, thanks to the volcanic soil

Berestagi is very much a local tourist town, catering for the crowds of Medan, just two hours away. Yet, the only attraction indeed seems to be the cool air, as I doubt that many Indonesians are trekking up the volcanoes here, neither will they visit the architecture of Batak villages around town, with their old Rumah Adats – the traditional houses catering for 6 to 20 families (reminiscent of the longhouses in Kalimantan). The volcanoes are Gunung Sibayek to the north, which does not really look like a volcano, but smokes nevertheless, and Gunung Sinabung to the SW of town, a real, cone-shaped volcano which seems much quieter. 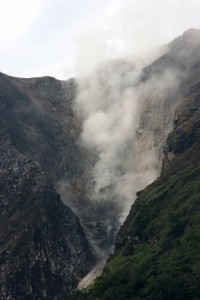 Gunung Sibayak is much more threatening, with steam and sulphur 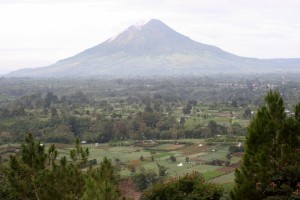 There are lots of villages around Berestagi, many allegedly with old wooden houses, but most in fact have abandoned the preservation and pulled down most of them, or let them rot away. True to form, I tried to find each and every traditional house in the neighbourhood, and avoiding the most touristic places in the process, but most villages turned out disappointing – apart from the most touristic ones, like Lingga, with many houses, on stilts, thatched roofs, and intricate gable triangles, much better kept than in most other villages. One is expected to provide a voluntary donation in Lingga: the fact that the state of the houses is much better than elsewhere suggests that the donation is indeed used for what it is meant for. SE of Berestagi are more villages, some only reachable on foot, as the bridge connecting the village with the outside world had collapsed. Little of interest in terms of houses here, but watching village life is as interesting, and in fact more colourful. Only disturbing issue is that in some villages a bule – foreigner – is still clearly a novelty, attracting whole lots of children – a true pain in the neck! Perhaps there is a benefit in going to touristic villages after all, where people are much more used to foreigners. 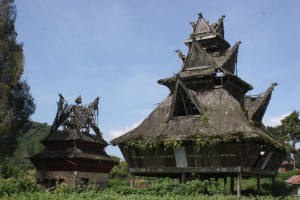 one of the nicest Rumah Adats is just outside Berestagi 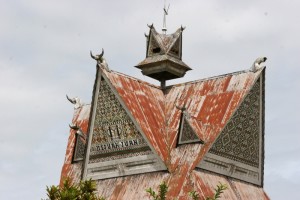 the roof of a Rumah Adat in Lingga, one of the best-preserved villages 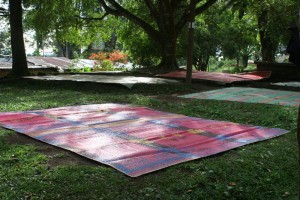 There is not much else to do in Berestagi, except for Gunduling Hill which provides for a nice view over town, and over the volcanoes, and also serves as picnic place in the weekend, every inch of the local park covered with mats, rented out by the local entrepreneurs, and for the local markets, the main one with plants, and the vegetable and fish market further down Mainstreet. And there is also a delicious small restaurant serving Babi Panggang – roast pork, or B2, in the local language.

I managed to talk myself into the top hotel in town, Hotel International Sibayak, for well under half the usual price; I was still almost the only visitor, and had the sizable restaurant entirely for myself. An interesting feature of Indonesian hotels is that each room contains a pricelist for all the items in the room, like towels, bathrobe, ashtrays etc; some suggest that you could buy those items as souvenirs from the hotel, others openly threaten to charge those items to the room if they get missing, pointing at a lesser-known Indonesia habit, perhaps?

Next to Lake Toba

One Response to Berestagi to Bukittinggi (1)