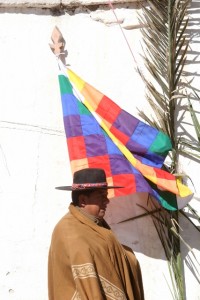 Casabindo is the only place in Argentina where they do bullfights, but they do this a lot nicer than in Spain. No torture, no killing. Once a year, August 15th, the small village, located far from any large town or city deep in the Quebrada de Humahuaca in North West Argentina, celebrates the day of ‘La Virgin de la Asunciation’. This usually attracts a large audience, half of it from the surrounding villages and the rest from other places in Argentina, and even a few foreigners. To get to Casabindo, one needs to do some 60 km of dirt road, under normal circumstances not really difficult, but on bullfight day, with so many others trying to get there too, a total nightmare. Everybody is in a hurry, overtaking cars in front whilst visibility is reduced to nil because of the clouds of dust that are created by each car and remain in suspension above the road – there is not a drop of wind. 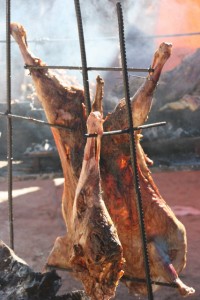 Casabindo is fully in the ban of its annual fiesta. Things are well organised, with parking attendants and traffic wardens managing the enormous influx of cars, directing everybody to a large parking lot. There are many eating stalls, selling everything from roasted goat – chivito – and other barbeque specialities to fruit juices, empanadas and a whole range of local specialities. Curiously, soft drinks only come in 1.5 l plastic bottles! There’s also a market, selling hats, ponchos, blankets, jewellery, and all other sorts of handicraft. Somebody has put up some football tables, which are enthusiastically being used by the youngsters. 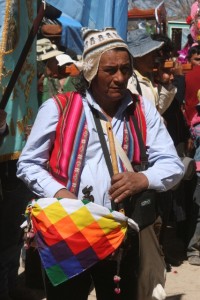 Around midday, after the church service, the village explodes into a colourful procession, in which everybody seems to participate. Saints are being carried around, there is music, and a group of men and women imitate the offering of goats, altogether a colourful happening, yet with a totally local character. Only when the procession has returned to church and after some more folk dancing, the village square is being prepared for the bull-fight. Thousands of people have gathered, sitting on the wall surrounding the square, hanging in trees, or jostling for position behind the gates that are being closed.

A small bunch of local heroes is locked inside, armed with nothing else but some pieces of red cloth, or a red poncho. The idea is to distract the bull in such a way that one of those heroes can grab the chain of old coins that has been draped over the horns. In fact, both bulls and bull fighters turn out to be mostly disappointing, the bulls because they do not demonstrate much interest in chasing the bull fighters, and the bull fighters, equally pathetic, because they mostly cluster around an elevated flag pole so as to quickly jump to safety in case any of the bulls does show some interest. And some do. One, in fact, managed to trample over quite of few of the heroes, leaving some to limp out of the ring, but ultimately he found his match in a young chap who succeeded, to the wild approval of the abundant spectators, to snatch the string from the horns. Overall, a thoroughly entertaining experience, without killing of animals – the only ones in danger seem to be the bull fighters, and the people who need to drive back afterwards, ones again in convoy, once again through a cloud of dust. 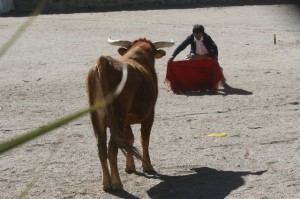 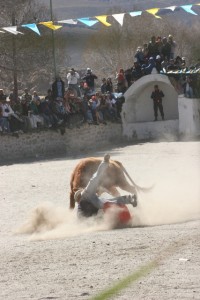 Sometimes it is not easy….. 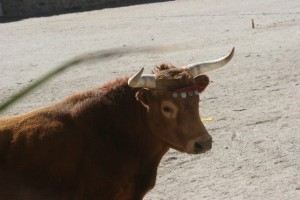 ….. trying to get to the coveted chain 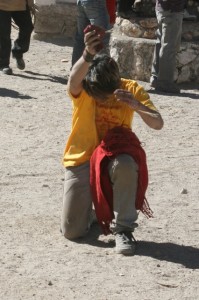