Although I have never been to the Democratic Republic of Congo, the country has fascinated me for years. I have a collection of books on Congo, many of which I read during the Corona lockdown of 2021. Below are some of my observations on most of those books. Note that many more people have written their experiences travelling the country – my collection is but a small sample. 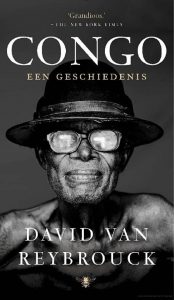 n “Congo: een Geschiedenis” (2010) (in English: Congo: the Epic History of a People) Belgian historian and writer David van Reybrouck grippingly describes in some 600 pages how Congo, now called the Democratic Republic of Congo (DRC), was raped by first King Leopold of Belgium personally, then by the Belgian state and, after independence, by a variety of local politicians and war lords. It is an incredible history, of opportunism by the Belgians and later by the western world, led by the Americans, during the Cold War. Of naivety, incompetence and mismanagement in the process of granting the country its independence in 1960, which in a matter of weeks (!!!) led to massive mutiny in the army, secession of almost half of the country, and international military intervention to protect westerners after attacks on some foreign residents – and how their sudden flight led to a country without any administrative skills, because almost none of the Congolese had been formally trained. And of subsequent rise of cruel autocrats like Mobutu, who, in his personal enrichment, was by every comparison far worse than Leopold and the Belgians, and later Kabila father and son, who opportunistically did everything to stay in control for the same reasons, despite their sheer incompetence in leadership. All of this within the larger context of the scramble for Africa, and for Congolese mining commodities, initially by European powers, more recently by the African neighbours of Congo, especially Rwanda and Uganda, and as the latest player, China.

I thought I was rather well versed in contemporary history, but I learned a lot about a part of the world that does not normally receive a lot of attention, reading this book. Which reads as a page turner, actually. 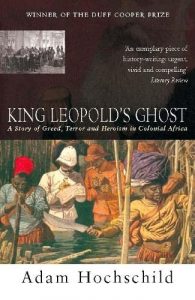 Adam Hochschild concentrates on a specific period in Congo’s history in “King Leopold’s Ghost” (1998). After a brief introduction he describes how, thanks to the exploration and the later efforts of Henry Morton Stanley, the Congo became the personal property of the Belgian King – not the Belgian state, but the King, in a time when European powers were actively dividing up the African continent. And how, through forced labour and an incredibly cruel and haphazard system of punishments for the local population, the King managed to extract the riches of his back garden, first ivory and later rubber, for personal account. And how a small group of brave men, led by the Brit Edward Morel, unleashed a worldwide campaign not seen since the anti-slavery campaigns earlier in the 19th Century, to bring an end to this ruthless exploitation.

Hochschild vividly describes the colonial singlemindedness and the associated horrors. But he also demonstrates how difficult it was to get other countries to respond to the allegations, and how the King time and again managed to exonerate himself by claiming the ideological high ground. Hochschild also points out how little the Belgians know about their colonial past, and how defensive they are when confronted. It is only in the last chapter that he remarks that it was easy to single out Belgium at the time, a small and unimportant country, but that exactly the same colonial practices, equally cruel, were committed by all the other powers with colonies in Central Africa. 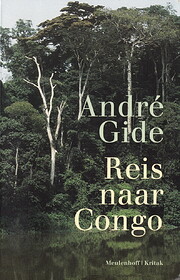 Andre Gide’s travelogue “Voyage au Congo” (1927), of which I read the Dutch translation “Reis naar Congo”, demonstrates the last observation of Hochschild, above. Mr Gide travelled through the French colony Congo, the one with Brazaville as capital, which at the time also included what is now Central African Republic. He travels by boat, by car where possible, and furthermore walking – which in his case is partly walking himself, and partly being carried in a -draagstoel-, helped by a large group of carriers and porters. On the way he mostly observes nature, which is not always very exciting, but he also encounters cases of exploitation and unfair treatment of local people, who often have no other recourse than complaining to him, the white man not immediately associated with the local colonial officers and their henchmen. The various issues – observed in 1925, the year of Mr. Gide’s travel – are not different from what Morel had campaigned against – extortion, forced labour, kidnapping -, except that they occurred in French territory, and not Belgian, and was thus politically a lot more difficult to expose. A book for the die-hard Congo reader, or for someone who wants to know how privileged Westerners travelled, in those days. 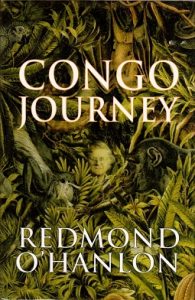 Like Andre Gide, Redmond O’Hanlon’s “Congo Journey” (1996) also takes place in what is now called The People’s Republic of Congo, after independence from France – for most it is just called Congo Brazaville (as opposed to Congo Kinshasa, the DRC). Some of Mr O’Hanlon’s writing is informative, some of it is mildly funny, but he never manages to engage me really, in his travelogue. I don’t know, maybe he is too occupied with himself, not receptive enough for his environment – or maybe I was just not receptive enough to even more reading about the Congo, the Brazaville version, not the Kinshasa version that I was most interested in. The book just didn’t appeal to me, I didn’t finish it. 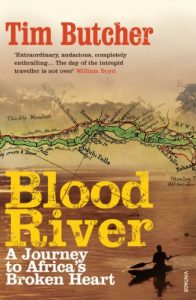 I have always wanted to travel down the Congo River, from deep in the Congo to the Atlantic coast. But never dared doing so, through a country completely bankrupt and lawless. Tim Butcher did, in 2004, and wrote a fascinating book about it, “Blood River” (2006). Maybe he really wanted to travel the route the explorer Henry Morton Stanley took, in 1877, when he became the first Westerner to travel from the east to the west coast of the continent, and especially, discovered the Congo River, hitherto unknown to Western map makers. Or maybe he wanted to see where his mother travelled in colonial luxury in the 1950. But I think he just had the same obsession as I had, go down that river.

He quickly establishes that his is not adventure travel, no, he calls it ordeal travel. Every part is a major challenge, firstly organising transport in a country where there is none, and then actually moving from one to the next place. The first part is a gruelling couple of days on the back of a motor bike, but he also travels by UN patrol boat, by canoe, by another UN chartered barge. None of the travel is fun, but at least on the road, or the river, he feels slightly safer than in the towns. What he encounters on the way is a country totally lawless, ruled by local strongmen and gangs, vaguely linked to political entities but mostly after their own, immediate and uncontrolled interest, in the process terrorising everybody else. And what he describes is a country going backwards, from a relatively well developed infrastructure under Belgian colonial rule to a place not unlike the one encountered by Stanley: the roads have disappeared again, have been reduced to narrow tracks; the only remnant of the railway is an overgrown sleeper; rusty metal hulls are all that is left of ships that used to sail up and down the river frequently. In the jungle there is nothing that reminds one of what we would consider normal life. One of his most poignant observations is that the older generations have, in fact, been exposed to more modernity that the younger ones – the inverse of what is considered normal in the rest of the world.

Throughout his journey Mr Butcher lives in constant fear. And you wonder what for, in the end. You know, apart from the occasional character he finds – a Belgian priest who arrived in the 1940s, or a British spinster, who has spent her entire life in the Congo, or some extremely helpful aid workers, both expatriate and local – apart from those people, there is really nothing to see, apart from green jungle and muddy river, and the occasional dilapidated town. That he manages to reach the Atlantic coast, alive and in less than two months, is a major achievement, for which I have the utmost respect, never mind that during reading the book I often referred to Mr Butcher as the lunatic. The other thing he achieved is that I don’t need to make that trip anymore, myself. 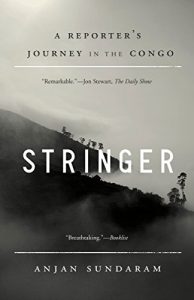 A lot less interesting is Anjan Sundaram’s “Stringer” (2013). Subtitled ‘A Reporter’s Journey in the Congo’, it is at least as much about Mr Sundaram’s own personal journey as it is about the Congo. Written in three parts, the first and longest deals with his arrival and stay in Kinshasa, with a local family rather than in a five star hotel. Quite interesting, the local scene, but not interesting enough for over a hundred pages. The second part is the most interesting one, when he travels upcountry, first by barge and motor canoe on a failed trip to visit a friend’s expropriated piece of land, then by UN aircraft to Bunia, to ‘visit the war’. But here again, it is too much about the author, too little about Congo, let alone about ‘the war’. In the third part, Sundaram is back in Kinshasa, where he lives through the election and the subsequent unrest, consisting of fighting in the streets between several political factions. But it is not that he is ‘reporting from anarchy’ as the book cover wants us to believe; Sundaram is holed up in a factory of an Indian contact, cut off from the outside world, until things calm down again after three days. Uncomfortable, for sure, but we are not talking about a hero, here. Altogether, quite disappointing. 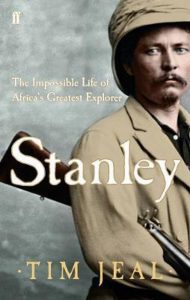 Tim Jeal’s biography “Stanley: the Impossible Life of Africa’s Greatest Explorer” (2007) is of course excellent background literature for anything Congo-related. Sadly, I haven’t had the time to read it yet. Neither have I read Stanley’s own writings, notably Through the Dark Continent, published in 1878, on his east to west crossing which included descending the Congo River. 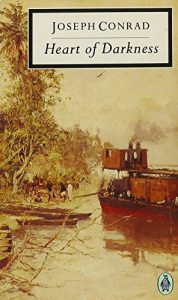 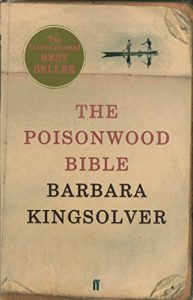 And then there is the fiction section of the list: my favourites are, of course, Joseph Conrad’s classic “Heart of Darkness” (1902), which describes exactly what I find so attractive, the Congo River and its people, but then a hundred years ago, and even more so, “The Poisonwood Bible” (1998), about a missionary and his family in what was still Belgian Congo in the 1950s.