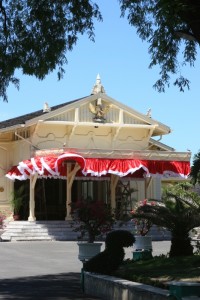 what it is all about, the elections: the governor’s mansion

Although fair, the first free elections for governor in Aceh were mostly boring, and heavily regulated

Back in Banda Aceh, early December, we finally had the local elections, for governor, the first time Acehnese have voted for their own rulers. The elections were a spin-off of the peace agreement that was signed some eight months after the tsunami, between the independence-seeking GAM and the Indonesian government, or more accurately the Indonesian army, which has profited from multiple side businesses in the province during the years of armed conflict (like there is illegal logging, extortion, growing marihuana, and what have you). Popular belief has it that the peace deal was a direct result of the tsunami, that inflicted so much damage on both parties, and also suddenly focused the eyes of the world, including those of 100’s if not 1000’s of foreigners who arrived in its wake, on Aceh, but in fact I have it from reliable source that a peace deal had been in the making for months before the tsunami, and a final draft was sent out two days before the disaster struck. In any event, tsunami or no tsunami, elections were on the block.

The official date had been set at 11 December – after multiple postponements, from May to June to August to September. In fact the run up to the elections was a very interesting process, first with the identification and vetting of candidates: local parties were not allowed, only national parties could participate (so that GAM could be excluded), but in a compromise independent candidates could stand, too. The two weeks of campaigning were quite funny, yet very disciplined. Somehow all eleven candidates had produced posters with the photos of themselves and their proposed vice-governor next to them, all looking very seriously, wearing the Indonesian national symbol of a petjie, the black, rimless hat. All male candidates, of course. There was nothing to tell them apart, especially because the photos had been touched up to make them look younger, resulting in everybody looking the same – in fact one of the candidates I met gave me his poster, and I did not even recognize him on there! 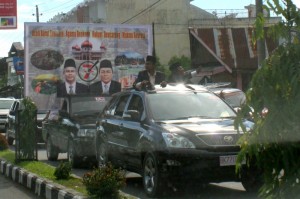 the candidates presenting themselves in a parade 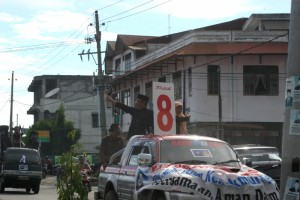 a rare woman candidate, or perhaps its the wife of Mr nr eight 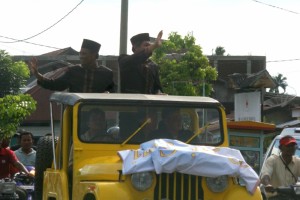 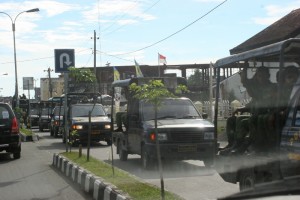 and all these cars are the military protection for the parade of candidates; somewhat concerning, no?

Election rallies were strictly controlled events, where the candidates sat in cars, trucks, pick-ups, which drove through town in convoy, waving… yeah, well, waving to nobody, because there was nobody watching the convoy, except irritated road users whose passage had been blocked. And heavy police presence, mean-looking riot police, somehow did not encourage enthusiasm. During the campaign some candidates were still disqualified, because they failed the Koran test: all had to demonstrate detailed Koran knowledge, which was tested by the independent election committee. Anyhow, in the end the unexpected occurred, and an independent – who happened to be the local representative of GAM – won hands down, with the second place for another independent – who happened to be the GAM leader in exile. It is hard to see how the electorate could have prepared a stronger message to the national political elite – who is distinctly unhappy with the outcome, or so it seems. Let’s hope that the new guy gets a fair chance, and does not descend to the common political level; did I tell you that he replaces an interim governor, who was propelled to center stage because the previous, appointed governor landed in jail for corruption? 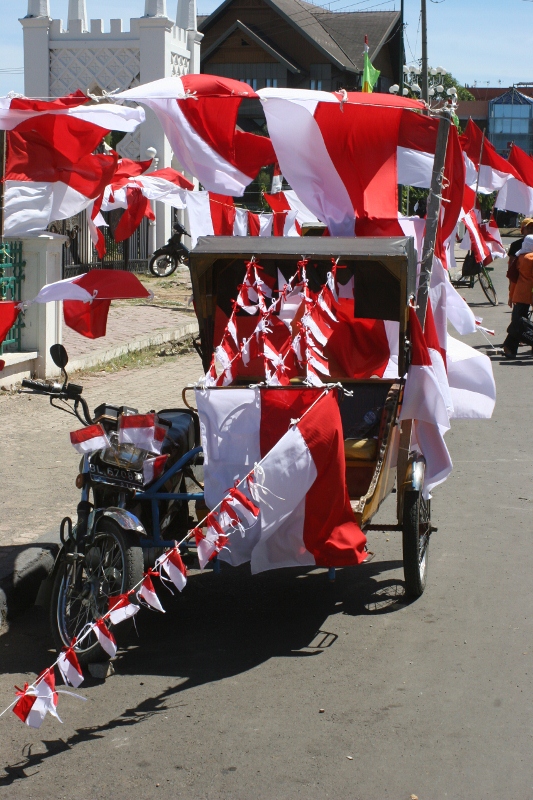 one of the becak owners also shows his colours