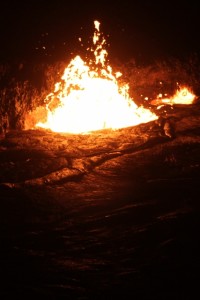 the Erta Ale crater wall, hot lava sticking on the inside

Ascending the Erta Ale volcano is normally done starting early evening, when it is a little – only a little – cooler. It is getting dark quickly, and soon we walk by torch light, carefully avoiding sharp edges and holes in the surface. Separately, a camel takes up our camping gear and some food and water. 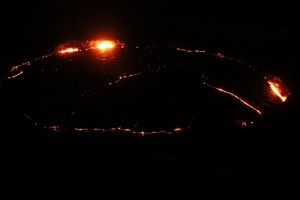 the Eta Ale crater, at night

Still some two hours away, we start seeing the glare from the volcano, and when we come closer, we see the steam, we smell the sulphur. After having caught our breath after the 3.5 hour ascend, and after we have established ourselves in one of the huts at the top, where we will spend the night, we climb down the crater rim. Erta Ale has two craters, one inside the other, and the surface of the outer one is made up of fibrous, once again undulating, lava. Sometimes the rock crushes under our shoes, collapses, making us drop a little. Never more than 10-20 cm, but it is an eerie feeling, especially because it is pretty dark everywhere. Getting closer to the rim of the inner caldera, we start feeling the heat. Below – perhaps 50 to 100 meters down, difficult to estimate -, the floor of the inner caldera is entirely liquid; although parts of the lava lake seem dark, we can see the surface moving in angry waves, as if a bad storm blows over the lake. Some cracks in the dark surface allow a view of what is going on below the surface, and in case your imagination is insufficient, from time to time fountains of yellow and red-hot lava splash up along the rim, the glowing fluid clearly sticking to the rock afterwards. 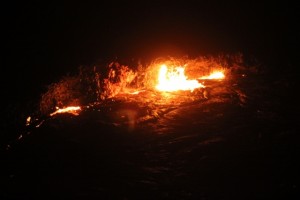 an explosion illuminates the crater floor 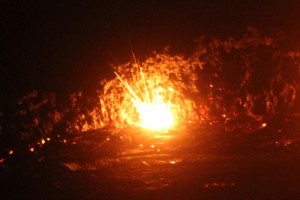 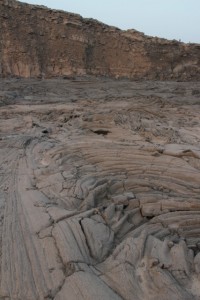 the rim and the floor of the outer crater 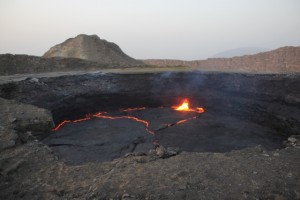 the crater at daytime, looking much smaller

Of course I need to see this in daylight too, so where most other tourists descent at dawn, to avoid the heat of the day, I have to get back into the outer crater, at first light. The softish rock we were walking on last night is silvery coloured, and once again, solidified in beautiful patterns.  And wherever there is a strong sulphur smell – much stronger now than earlier, and almost suffocating in some areas – yellow threads, fibres, are attached to the rock. 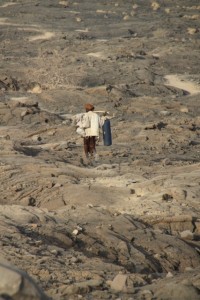 The crater is as active as the night before, and as impressive, although in daylight it is actually much smaller than we had anticipated. The contrasting glows are less pronounced, but you still get a pretty good idea of what is going on, down there. 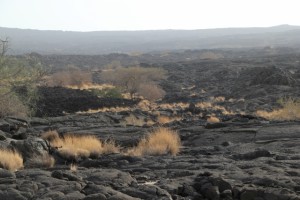 irregular surface of solidified lava on the crater slope 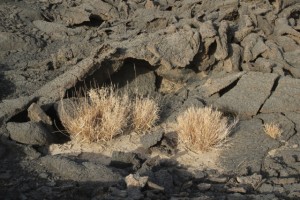 some plant life still exists in between the rocks 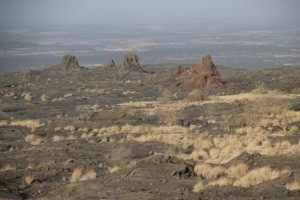 the slopes of Erta Ale 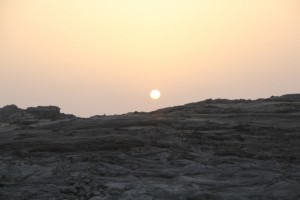 sunrise over the crater

When we walk down the mountain, the next morning, we actually see the slopes of the volcano close-up. Lava flows have come cascading down the outside solidifying whilst the inside was still fluid, creating what is known as pahoehoe lavas, with undulating, wavy surfaces. Fabulous structures. It is just a pain to walk on, even in daylight.

NB: Pahoehoe lava comes from an Hawaiian word and describes the ropy, undulating structure, which results from the outer surface of the lava flow cooling first, whilst the inner parts remain more viscous for a longer period. Common in Hawai, obviously.