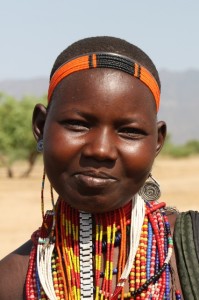 One of the main attractions in South Ethiopia, and especially South Omo Valley, are the tribal minorities, although authenticity is perhaps compromised.

One of the features of Southern Ethiopia, quite different from the North, is its ethnic diversity. Some of the tribes, like the Dorze and the Konso, are known for their attractive construction work resulting in charming hill-top villages and intricately built and decorated houses. Others, for instance the Hamar, the Dasanech, the Arbore and the Karo in the South Omo River Valley, distinguish themselves through their unique hair-does and their traditional dress – or lack of it. The Mursi, inside the Mago National Park, claim world fame from the lip-plates inserted in the lower lips of their women. 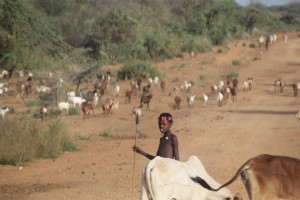 many South Omo Valley people are, or were, pastoralists

I saw this described somewhere as the last place where a variety of African tribes still live in their original setting. Well, everything within limits, of course. The original setting comes complete with warnings of pick-pocketing – raiding is a second nature to the African tribe – and a remarkable Ethiopianisation of children, and quite a few grown-ups, who have quickly emulated their northern brethren in asking for money, pens, caramellos and anything else, as soon as they see a feranji, a foreigner. 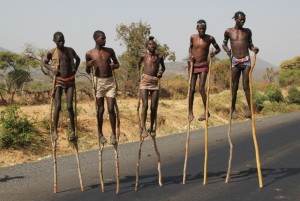 stilt walking Hamar, not so authentic either, I think 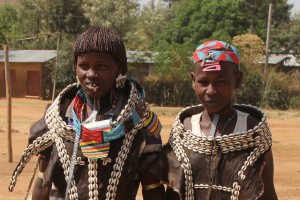 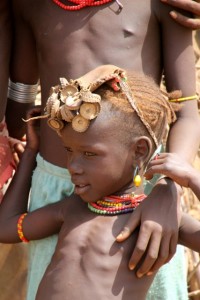 even the smallest children are being prepared for tourist photos 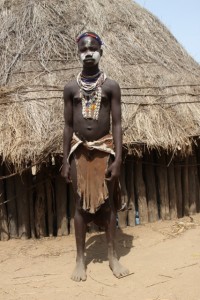 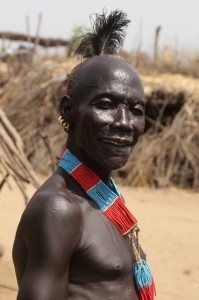 portrait of an Karo man 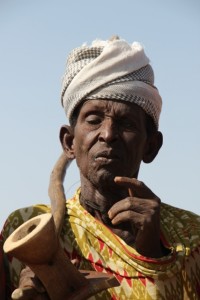 Arbore man, I am unsure about the authenticity of his smoking pipe

But the exploitation is much more elaborate than just that. Visiting a village in the South Omo Valley is part of the South Ethiopia tourist trap, further undermining this claim of authenticity. It starts with paying some 200 birr – almost 10 Euros – per person entry to a village, plus 50 birr for the car, and extra for the mandatory guide, and often the mandatory police escort. On top of that come the cost of all the individual photos: everybody wants to have their picture taken, only to charge you somewhere between 2-5 birr (10-25 cents) for the privilege, afterwards. Our experience with the Mursi demonstrates that this can end up a pretty ugly affair, disgusting really. In some Dasanach and Karo  villages people have decorated themselves excessively, to say the least: much of what they wear may be original garb, but I cannot get away from the impression that certain additions – a nail through the lip, bottle tops as hair decoration – have been adopted to beat the competition for the tourist camera. Many people also try to charge you for every other photo you take, whether from their house or somebody else’s, from a cow or a goat – “it’s my goat!” -, or from an exotic bird that happens to be in the neighbourhood. 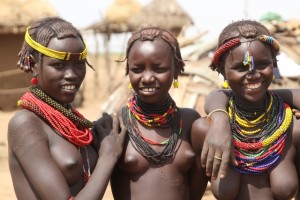 I have no problem with the principal of paying, after all, everywhere in the world people pay to see something that is unique. But let’s not do as if we are coming to see an almost extinct culture; let’s just call it by its name, we are here in the South Omo ethnic museum – some have called it a zoo -, and the people are the museum’s assets; hopefully they are the main beneficiaries, too. If we could just streamline the charging process, and the distribution of the proceeds, people could start to behave with a lot more dignity again, and return to what they used to be: a proud people. Which would benefit everybody, come to think of it.

NB: Just in case you ask, I did take the opportunity to take some fabulous photos of these people, and I did pay the occasional random contribution, but I also, on several occasions, got so disgusted that I put my camera away – which, in a way, is a pity, but in the long term is probably the thing to do. The presence of the occasional bare breast may shock some of us, but it quite obviously doesn’t shock, doesn’t even bother the people of the South Omo Valley, and I thus don’t have any inhibition showing the people as they are, and as they want to be seen themselves. No extra charge.

Not all ethnic minorities have been covered on this site. There are entries for: 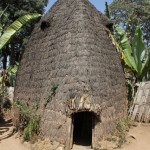 The Dorze, a construction and weaving community near Arba Minch, in fact not part of the South Omo Valley, but a visit to them has some similarities (although they are better organised) 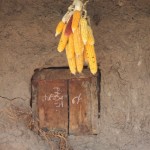 mais drying in a Konso village

The Konso, an isolated hill-top community near Karat-Konso, technically not part of the South Omo Valley, but a visit to them has definitely similarities 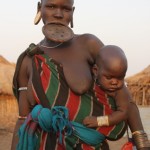 The Mursi, the most famous on behalf of their lip plates, but possibly also the most opportunistic of all South Omo Valley tribes 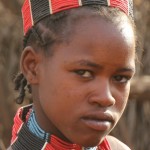 The Hamar, perhaps the most amiable, and also the most spectacularly decorated of the South Omo Valley tribes. 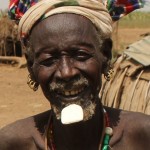 a Dasanech man laughs about his own outfit, too

The Danesach, an originally pastoralist people living in unnecessarily primitive conditions along the Omo River 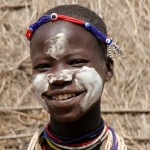 The Karo, goat herders idyllically located high above the Omo River, and adapt in working the tourist trade 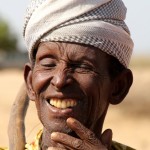 The Arbore, seemingly spending daytime in a traditional village, and retreating to higher levels of comfort at night