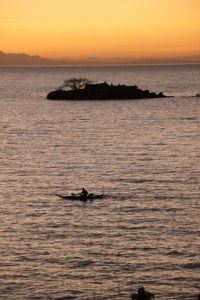 A peaceful, as yet unspoilt, village on the shores of Lake Tana, with a beautifully decorated church and a whole range of colourful birds.

On the far side of Lake Tana is Gorgora, a small village, really, nothing more. There is nothing to do here, apart from looking at the local church, watching birds, and chilling out at the little lodge and campsite of Tim&Kim. This Dutch couple set up their place some time ago, partly to provide accommodation for tourists in one of the most peaceful settings you can imagine, and partly to support the village people, through small-scale projects like school toilets and a water system, and straightforward employment. 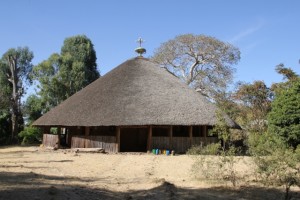 The church, Debre Sina Maryam, is older than any of the ones we have seen so far, and possibly even more beautifully decorated with frescos – including pictures of historical giants as Emperor Fasilades, Queen Sheba and King Solomon! (NB. some of the frescoes are included in the picture gallery of the Lake Tana monasteries entry). This church still has a thatched roof, and nicely carved woodwork inside to support it. Obviously, it is still in use, with a wooden pulpit outside, reinforced with a loudspeaker. 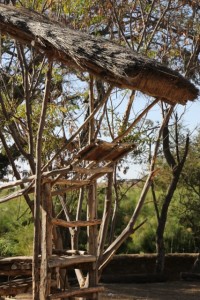 pulpit, for open-air services outside the church 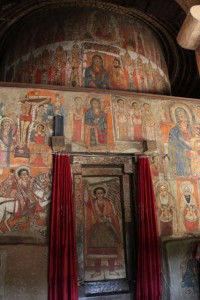 inside of the church, decorated with exquisite quality frescoes 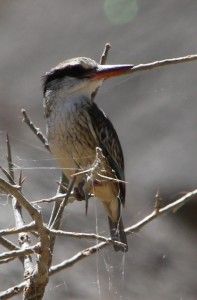 one of the many Kingfishers 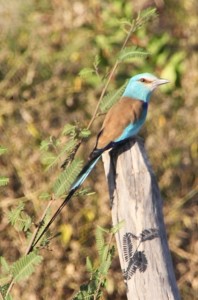 this is an Abyssinian roller, apparently 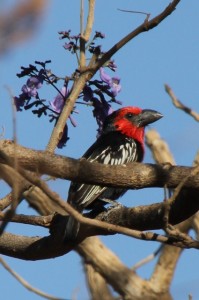 Birdlife in the area is equally exciting. A couple of hours walking around the lake reveals a wealth of spectacularly colourful birds, of which, with the help of our able guide, Tim, we were even able to name a few, as well. 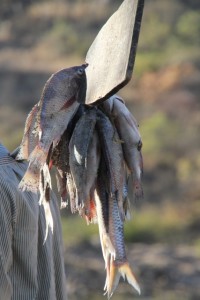 catch of the day

There are several ways of getting to Gorgora. A public ferry departs 2-3 times a week from Bahir Dar for the two-day trip across the lake, overnighting in a small village half-way. We, unfortunately, took the bus from Gondar. A short trip, nothing special, but it is all the hassle one has to cope with. As so many buses in Ethiopia, this one leaves somewhere between 5.30 and 6 am. From the moment of getting close to the bus station in Gondar, everybody wants to help you buy a ticket. Needless, because for Gorgora you buy a ticket in the bus, in fact you cannot buy it anywhere else, so any money handed over beforehand would be immediately lost. One guy even got into the bus to sell us a ticket, at vastly overpriced rates, and claim further money for the fact that he carried a suitcase to the back, and to the roof of the bus. Everybody already on board must have known this was a scam. Nobody said anything. Someone else claimed a service charge, also for carrying a suitcase to the roof of the bus, after he had taken it down first. When finally the real conductor appeared, we haggled for another 20 minutes, to get somewhere near the real ticket price – we still paid about twice as much, but anyhow. Exhausting. 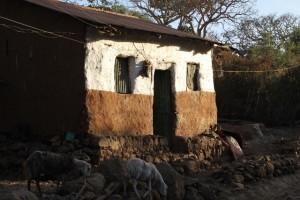 an average house in the village