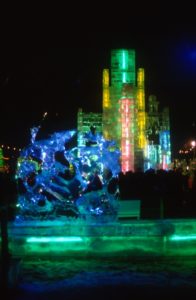 ice sculptures and life-size buildings from ice, during the Ice festival in Harbin

A very un-Chinese city, with a very Chinese-style Ice Festival in winter.

Winter in China is not the most inviting time to travel, but there is one exception. Harbin, in the northern most part of Manchuria, towards the Russian border, hosts its annual ice festival, and we were determined to go and see it. So off we went, well prepared with thermal underwear, fur coats and fifteen jumpers, in late February to avoid the worst of the cold. 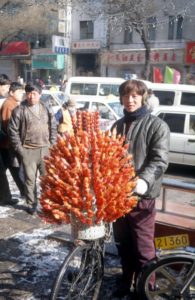 Harbin is a two hour flight from Beijing, but one enters a different world. The old part of town is architecturally rather nice, mostly build by the Russians at the turn of the century, although it cannot escape the impression of being rather run down. It even contains a beautiful Orthodox church, which miraculously survived the Cultural Revolution. The church is not being used as such anymore, it now houses a picture exhibition with clear evidence that Harbin was actually a much more developed and advanced town 80 years ago, when it was still mainly inhabited by Russians. So much to say for Chinese progress. 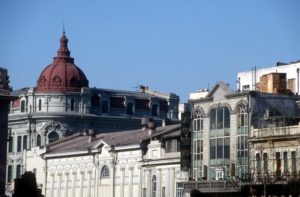 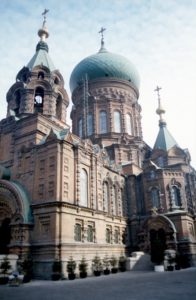 the orthodox church in Harbin 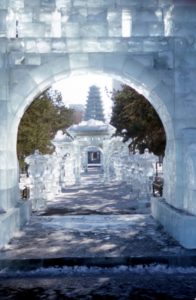 entrance to the ice sculptures park 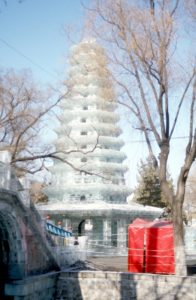 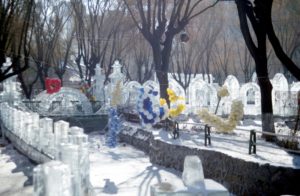 sculptures, fences, bridges, everything made from ice 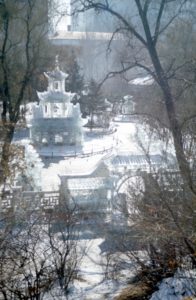 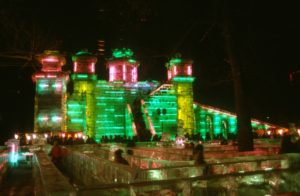 But the main attraction of Harbin is the ice festival. Harbin is situated on the Songliao River, which freezes solid in winter, and allows large ice blocks to be cut out and transported to the park in the centre of town. Here, some of the blocks are carved into quite attractive sculptures, whilst others are used to build huge pagodas, temples, castles and what have you, out of ice. Very impressive during day time, when you get a good view of the immensity of some of the structures, and even more enchanting at night, when all the sculptures and constructions are elaborately illuminated with coloured lights, both from within and from the outside. Especially at night there is a real nice atmosphere, inevitably dominated by thousands of Chinese families, and undoubtedly enhanced by the fact that we visited during the Chines New Year, the so-called Spring Festival (although temperatures were far from what I image to be related to Spring). 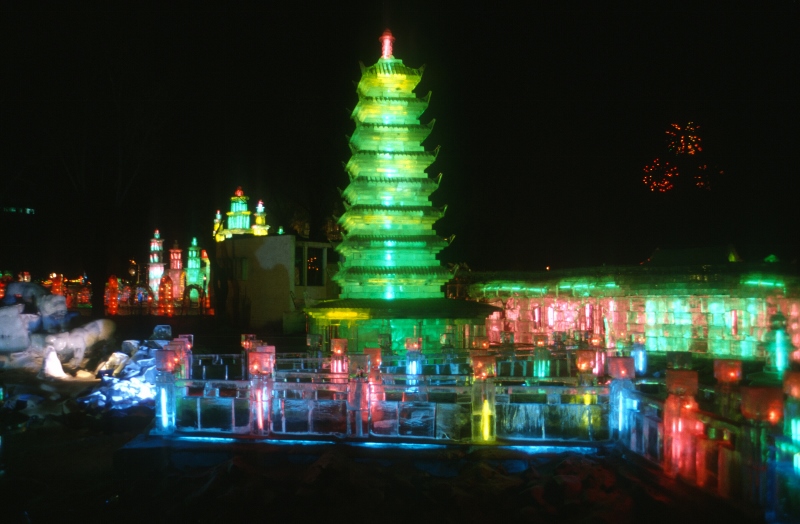 more ice buildings, and fireworks in the air 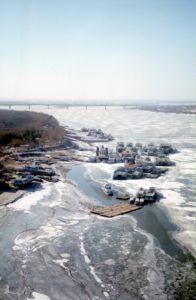 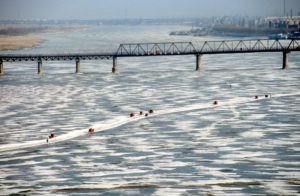 to the effect that the bridge isn’t being used anymore 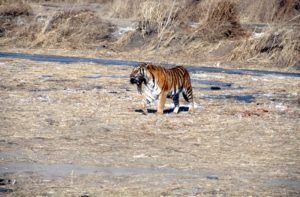 a tiger in the park

Having seen the old town, the church and the park with the ice sculptures, there is not much else left, except for the Siberian Tiger Project. This was touted as a park outside town, where tigers in captivity are being prepared for the real thing, so that they can be released in the wild again. In the meantime, visitors are welcome, probably in order to pay for the facility. Now this one is run in a very Chinese way. The park is actually not bigger than a few square kilometers, maybe ten football fields, and it houses perhaps 20, 30 tigers. It has not one, no, it has a number of roads dissecting it. When we were there, at least four busses (just normal busses, like you see in town) loaded with visitors were driving around. At the same time, two Landcruisers were also in the park, their drivers throwing live chicken out of the window, to train the tigers to catch them, and no doubt also to allow some spectacle for all those paying visitors. No wonder that all the tigers are waiting at the entrance of the park. Anyhow, a culturally revealing experience. 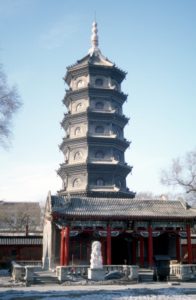 a real-materials pagoda, outside town 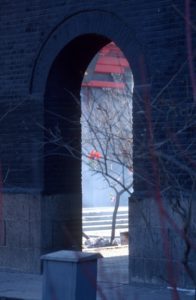 and a glimps in a temple, also out of town