the faces of the Jacmel carnival February 2002 – 11. the Haitian arts 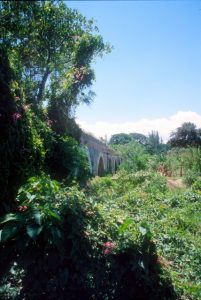 an old aquaduct in the Croix-des-Bouquets area, used to feed the sugar mills during plantation times

One of the more interesting, yet, less explored, things to discover in Haiti are the remains of the sugar mills and plantations around Croix-des-Bouquets.

Croix-des-Bouquets is a dusty market town just to the north of Port-au-Prince and is the commercial centre of the so-called Cul-de-Sac, a low lying area sandwiched in between mountain ranges that stretched from the sea to the border with the Dominican Republic. What’s in a name. The area provides fertile soil deposited by the Rives Blanche and Gris – so much for originality -, and grows most of the produce for the capital.

One of the lesser known attractions of this area are the remnants of the infamous ‘habitats’, the Haitian sugarcane plantations that made the country once the largest sugar producer in the world. By the mid 18th century Haiti produced more sugar than the combined output of all other islands in the Caribbean, from about 800 plantations, as well as some coffee, cocoa and indigo. Haiti was by far the most profitable colony for France, and probably more profitable than any other colony at the time. Whether all that wealth came only from sugar is unclear. Although Haiti was not allowed to export any of the rum, which was distilled as by-product, the export of vinegar was enormous in these days, and quite surprising for a country that had none of it. 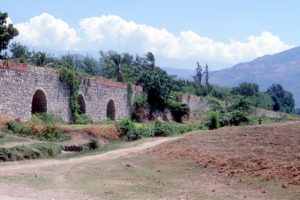 another view of the aquaduct, which brought water to power the sugar mills 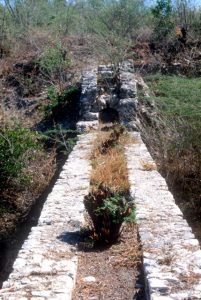 parts of the aqyaduct were even covered 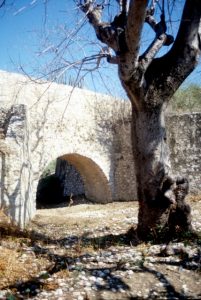 another construction, arches underneath the aquaduct 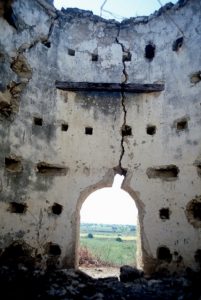 more strutures, I am unsure about its role at the time 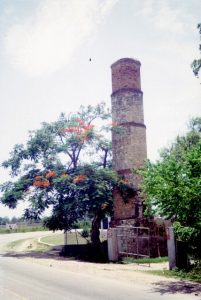 an ancient chimney, part of a sugar mill 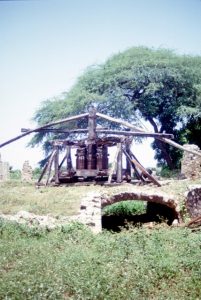 the wooden contraption that was squeezing the sugarcane, driven by animals in this case 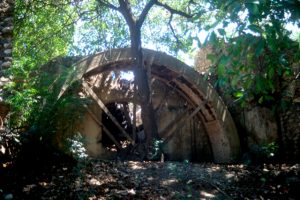 another wheel, this one powered by the water from the aquaduct 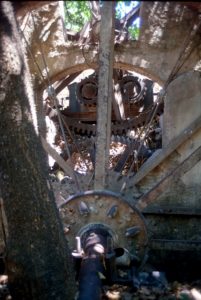 these are huge metal structures, mostly imported from the UK (made in Liverpool, I saw somewhere) 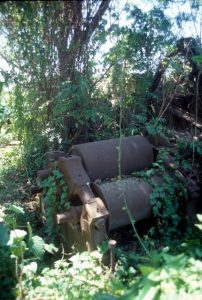 another overgrown piece of machinery 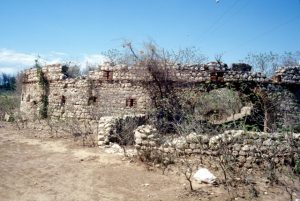 this is one of the largher animal pens, where oxen went round and round to turn the presses 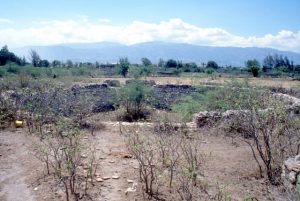 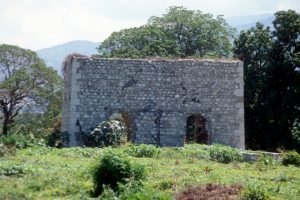 and another structure of uncertain use 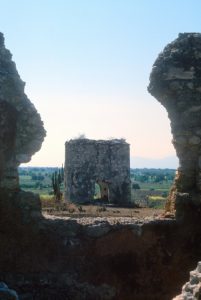 like this one, seen through a gap in the aquaduct

All over the Cul-de-Sac are traces of the ‘habitats’, in the form of ruined buildings, towers, drying cones, and especially the aquaducts. The key to a successful plantation, one that had a mill that could process the sugarcane into sugar, was access to power to drive the presses, and early on the benefits of hydro-power had been recognised. Most plantations in the area tapped water from the Rive Gris, and transported this through gullies and ultimately into aquaducts, some of them up to 300 m long, to the sugar mill. Here the water was used to run a press, in which the sugarcane was fed to extract the white juice, which subsequently had to be crystallised into sugar. Many of these aquaducts are still in excellent condition. They are not being used anymore, as generators have replaced them as sources of power, but perhaps one day they can be revived to serve as conduit for irrigation water. For those sugar mills that were too far away from a water source, animal power was the alternative. In several places you find back the large stone circles, in which a couple of oxen went round and round, to turn the axle of the presses. One very nice example of an animal driven mill with dual pens is just outside Croix-des-Bouquets, and a mixed plantation type, with both animal pen and aqueduct, can be found on the way to the Dominican Border. 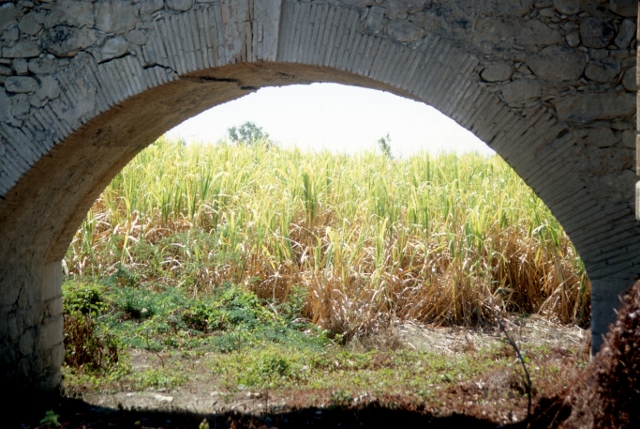 through one of the arches, the sugar cane 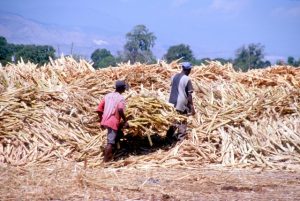 there are still people working the sugar, obviously 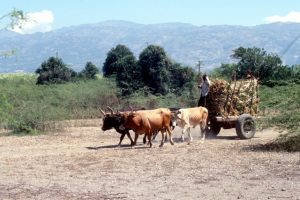 and transporting it to the present day mills 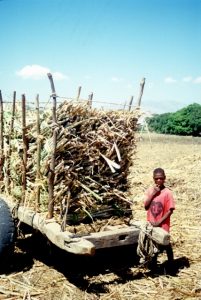 he doens’t know what to do with it yet 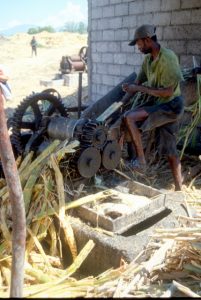 but he does, with a fuel-powered modern sugar mill

The process of pressing sugar cane into sugar is still practised, although on a much smaller scale that during the 18th century. The plantations are much smaller, and most sugarcane is now transported by cart. The little railways from the past, of which the tracks are still visible, are clearly too ambitious a system for today’s production levels, even if they ever can be restored. Rum is still being produced as a side product, on site, a rough concoction that we were invited to try. Hmmm. Luckily, excellent Barbancourt rum is also produced in Haiti, somewhat more professionally shall we say, and whatever is left after internal consumption, nowadays legally exported.

A great resource on the plantations and sugar mills in Haiti is http://www.mappinghaitianhistory.com/plantations-and-sugar-mills 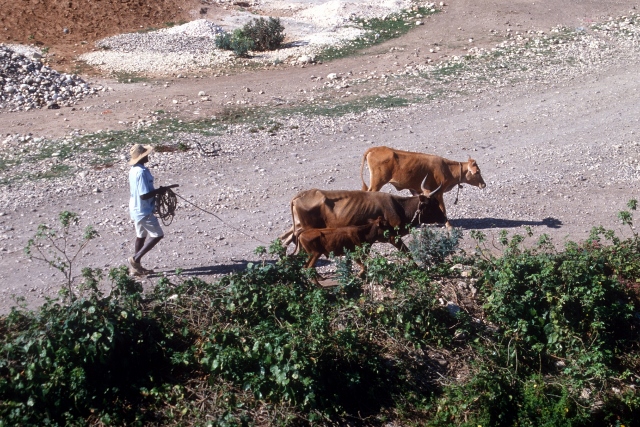 others go their own way