Gemeentemuseum in The Hague August 2006 – 02. the arrival 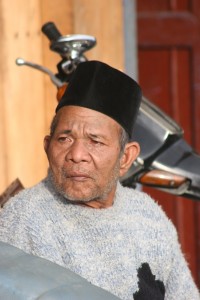 Why I went to Banda Aceh in the first place, and what I found there: a comfortable hardship posting

In July 2006 I arrived in Banda Aceh, on a one-year contract with the International Organisation for Migration (IOM). My job was to lead the rehabilitation program that had been established following the devastating earthquake and subsequent tsunami of Boxing Day 2004, that had wrecked havoc along much of the coast of the province of Aceh (Nanggroe Aceh Darussalam, in full), part of the Indonesian island of Sumatra. IOM was new to me, and so was the disaster response work, the self-inflicted adrenaline-pumping atmosphere where everybody was in a hurry to run projects, cutting corners in their haste to save lives, without time to record and reflect on what was being done, and without realizing that 18 months after a disaster there are no lives to be saved anymore.

Banda Aceh had been flooded a second time, so much was clear. The first flood, of an unprecedented amount of water, had been followed by a flood of international aid workers of equally unprecedented proportions. Quite apart from the intentions, which were invariably good, and the commitment, which was truly incredible, the effect of this second flood on Banda Aceh was perhaps as profound as the first one, the actual tsunami.

Aceh has a long history of not wanting to belong to Indonesia, or its colonial precursor, the Dutch East Indies. Independent-minded, the Acehnese have been fighting domination by others for centuries, most notably the Dutch, of course, but since Indonesian independence the central government in Jakarta, symbol of Javanese domination of the archipelago, too. As a result, Indonesia may have had as much difficulty subduing Aceh as the Dutch colonial regime had. 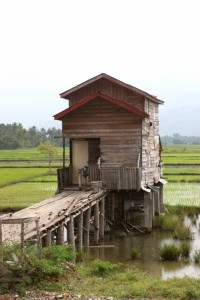 in the middle of the rice paddies

Like the Dutch before them, Indonesia has been adamant that Aceh is an integrated and indivisible part of the Republik, and like the Dutch, they had their ways to make their point. For many years Aceh had been closed off for outsiders, certainly for almost all foreigners, who would anyhow have been just a pain pointing out human rights and the lot, but also for those Indonesians who had no specific role in the province. No, only the Indonesian military was the institution to solve Indonesia’s problems with Aceh, and as militaries do, around the world, they have so their own way of dealing with real, or perceived, challenges. In order not to be a burden on the national budget, the military – again, like militaries do in several other parts of the world (think China, Egypt) -, the military had established several lucrative businesses in Aceh; they controlled the oil winning, for instance, and the hardwood monopoly, and quite likely lots of other large scale business, like palm oil. Handy, in case a plantation needs to be expanded at the expense of the local farm land, or forest reserve, or against the wishes of the community. A community that was increasingly being diluted with migrants from overpopulated Java, as a result of Indonesia’s transmigration policies; migrants who were more pliable than the locals, and thus received preferential treatment from the army – which created a whole new set of tensions in Aceh.

Anyhow, because of the foregoing, Aceh was very much a no-go area, carefully guarded by the army. Also, therefore very much an area with no infrastructure to receive outsiders, no hotels, no restaurants, no car rental companies, no quality rental accommodation. Until the tsunami hit, on Boxing Day of 2004. Somewhere, somebody in the Indonesian government sensibly recognized that this disaster was far too big to handle for the army alone, or the government alone, and somehow, that somebody managed to convince power brokers to open up the province. Resulting in a second tsunami, that of humanitarian aid workers.

My employer, IOM, happened to be the first on the ground, because they had, through careful negotiations with the government, already set up office in Banda Aceh several months before the tsunami, to initiate a small-scale development aid project. So when the tsunami hit, and the international disaster rescue, recovery and rehabilitation community mobilized itself, IOM was the only foreign organization with an office and limited accommodation in Banda Aceh. So IOM got flooded, too – the stories from those who came first are fabulously touching, of collegiality and companionship of aid workers who face not only a daunting situation because of what had just happened, but also because of the lack of any form of modern infrastructure necessary to support a large scale humanitarian operation. 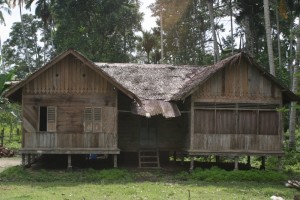 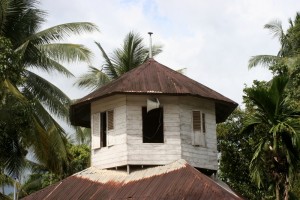 the smallest village will have its own mosque, in conservative Aceh

Enter the logistics specialists. Next to food and shelter for the survivors of the tsunami, the aid workers needed food and shelter, too. Acehnese whose houses had not, or not that badly, been affected by earthquake and tsunami quickly saw the opportunity, and many moved in with relatives, in order to rent out their own large houses to the expat community. And make good money in the process, of course, nothing wrong with a well-working market mechanism. With the increasing number of foreign experts, foreign goods were also required, and on the truck convoys that frequently drove between Medan, Sumatra’s large and well-equipped capital, and Banda Aceh to mobilize construction materials, blankets and food rations, some space was reserved for the things expats cannot do without. The few Chinese supermarkets in town were especially apt at adjusting to the new reality. As a gesture to the population of the province, who was not only more independence-minded but somehow seems to be stricter Muslim that those in the rest of Indonesia, the Indonesian president had agreed to introducing Sharia law in Aceh several years earlier. As a consequence, there was no alcohol available (or at least not openly available, quite a few Acehnese claim that the local rich and famous had always had access to alcohol, and used it, too). But soon after the flood of foreigners, Chinese supermarkets started to sell alcohol to foreigners, somewhat concealed, but obviously tolerated by the officials. And several entrepreneurs opened restaurants, where on the first floor beer and wine was available, either openly or hidden in teapots. Others started specialist shops, importing Western goods, mostly from Australia, or serving club sandwiches and hamburgers, to cater for the needs of the large expat community. 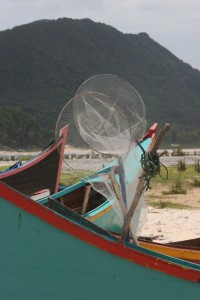 fishing equipment on the beach

The streets had changed, too. Where earlier the only vehicles had been old, battered sedans, occasionally blown off the road by an army convoy, now half of the cars were new 4x4s, the favourite transport mechanism of the aid agency. And there were even mild traffic jams, previously unheard of.

So by the time I arrived in Banda Aceh, a good one-and-a-half years after the tsunami, most of the logistics had been sorted out, and life had actually become fairly comfortable. And I found that there was actually little truth in the carefully crafted aura of hardship that surrounded an expatriate posting to Banda Aceh.