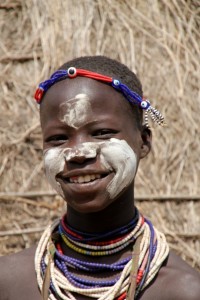 Beautifully located village with yet another tribe, well prepared to benefit from tourism.

The Karo are one of the smallest tribes in this area, numbering perhaps 1000. They used to be pastoralists, like many other tribes, but since their cattle have succumbed to disease, they have taken to herding goats, and to agriculture. 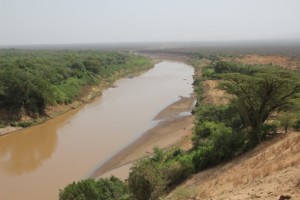 the Omo river, seen from Kolcho

They live in the village of Kolcho, which is attractively located on a hill overlooking, once again, the Omo River. Thathched roof huts, fairly large, much bigger than those of the Dasanech. Some modern improvements have been installed. But what else can I say? When we arrived, there were five other four-wheel drives parked under the specially constructed car port, just off-loading the tourists. Yet, there were sufficient women and children left to immediately line up next to our car, too, for the inevitable photo, against the inevitable two birr. And although I do believe they have their traditional outfit, once again consisting of very little cloths, I just don’t buy it that they are all permanently so elaborately face- and body-painted, or permanently have a nail through their lower lip, or anything else that – I think – is just an addition to attract the tourist’s camera. 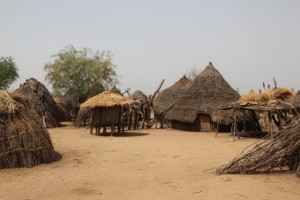 storage platforms outside the village 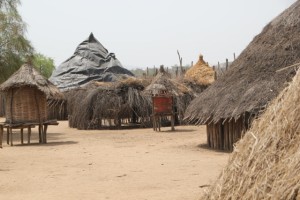 Karo woman in front of her house

No guide here, so no means of communication; however, I do find a young guy, perhaps 20 years old, who speaks quite good English. He tells me that he studies in Arba Minch, in boarding school, and is just visiting back home. Then he asks me for my pen. You can take the boy out of the village, you can’t take the village out of the boy. 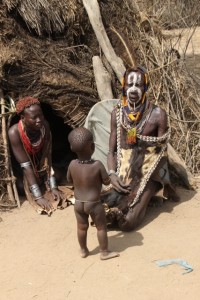 Karo family in front of their hut 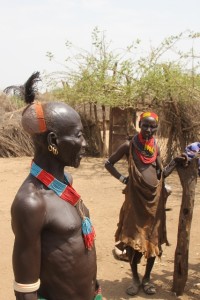 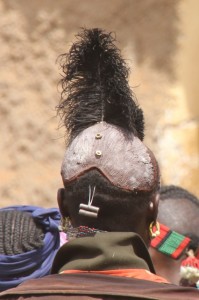 Karo man at the Dimeka market

Another observation: a man invites me, no, he insists, that I come into his yard, where he and two of his friends are sitting under a thatched roof, eating from an enormous bowl of nuts, or grains, or something. They immediately ask to be photographed – for the regular fee -, and hold up the bowl in front of them, to increase the attraction of the photo’s subject matter. They never, once, contemplate to offer me a grain, or a nut, or whatever it is they are eating from the bowl. In most cultures, you would never not offer some nuts or grains to passing visitors you have just asked in. And in many poor countries I have lived – Haiti, Indonesia, India, you name it -, people would share what they have with visitors. But here tourists are not seen as visitors, with whom you could have a human interaction, they are just seen as mature resources, that can be milked.

All this disturbs me somewhat, to say the least. 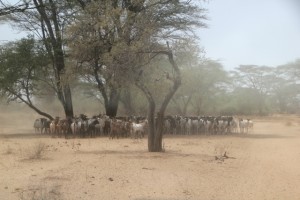 the Karo are goat herders 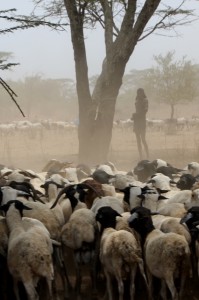 and the boys do wear traditional dress, at work

One Response to Kolcho – the Karo