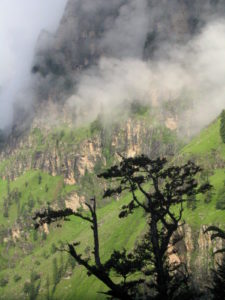 The road from pretty Mandi to touristic Manali, along the Baes River through the Kulla Valley, is attractive on account of the landscape and the wooden villages.

Mandi is a 7 hour bus trip from Chandigarh, comfortable enough in the front seats, and with good views of our progress from the plains into the hills further north. And equally good views of the frequent road blocks, whether by some of India’s famously holy cows that decided to lie down, by trucks that had broken down, or by rocks that had slided down.

Mandi itself turned out to be a little gem, an attractive village on the Beas River with narrow streets, bazaars and wooden, one-storied houses with nice balconies, all very pleasant. The most touted tourist attraction, a temple on a hill, turned out to be disappointing, with the surrounding park poorly maintained, and the promised views obscured by trees having grown out of control, but then, you can’t win ‘em all. 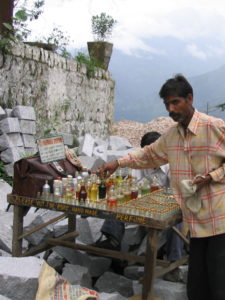 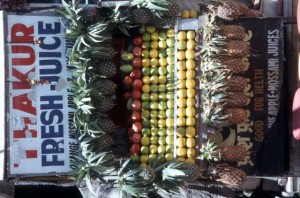 a juice stall along the road, in Mandi 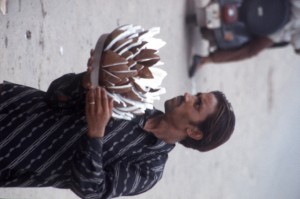 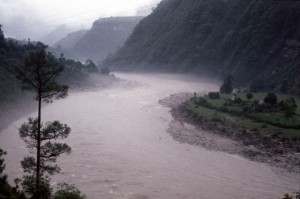 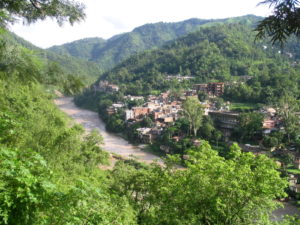 a town along the Baes River (courtesy Gijs Remmelts) 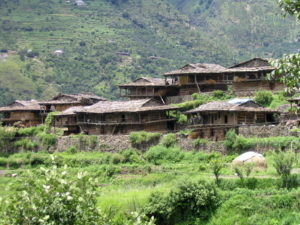 a wooden village on the road to Manali (courtesy Gijs Remmelts) 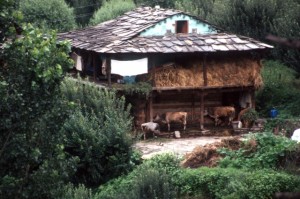 one of the wooden houses in the village 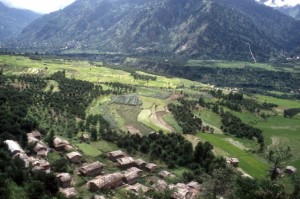 agricultural fields and wooden villages in the valley 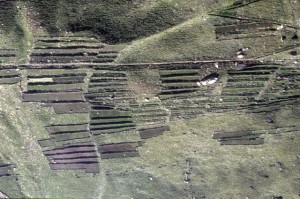 on the steep slopes only part of the land can be used, strenuously

Past Mandi the landscape becomes prettier. The road passes through a fairly narrow, beautiful gorge, still along the Beas River before turning north again into the Kulla valley. So early in the morning clouds were still hanging very low over the river and ample waterfalls, no doubt enhanced by the fact that it was monsoon season, thundered down the mountains in many different places. We had rented a car to allow more flexibility, and to stop or to divert from the main road. We thus crossed the river, over a huge bridge, somewhat out of place in this setting, to get from the main, west bank road onto the more scenic east bank, and onto Naggar, highly praised by the Lonely Planet – overpraised, in my view, especially because an LP recommendation attracts so many tourists that any authenticity is quickly lost. The Castle, as it was called, turned out to be a nice enough but heavily restored wooden building, now turned into a hotel, with what is called a small museum on the premises – small indeed! However, for the drive from Naggar to Manali, it was worth taking the detour, past orchards of apple and pear, rice paddies and a string of wooden villages. People in traditional dress, and men wearing distinctive embroidered caps. It reminded us of Southern China, where we had visited similar scenery. 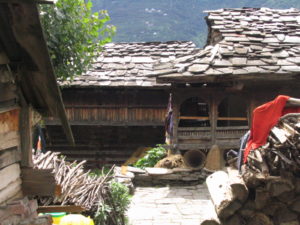 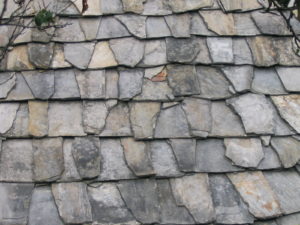 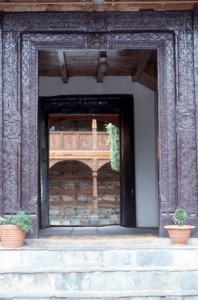 entrance to the Castle in Naggar 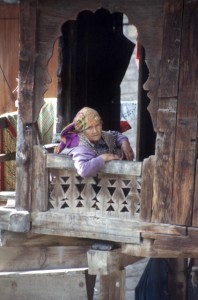 woman keeping an eye on the visitors to the Castle

Manali is a nice enough little town, but very touristic, full of hotels and foreigners, mainly backpackers, no doubt all heading in the same direction as we were going. What Manali also has is a number of excellent artefact shops, especially Tibetan stuff, but for prices vastly inflated over what we bought in Tibet some years ago. And Manali has weed, everywhere, just growing along the roads, free for all, which also may explain some of the popularity of this town with tourists.

The thing to do in Manali is to walk. We aimed for an afternoon trek through the Solang valley north of town, but instead we scrambled our way up the mountains, missing the track altogether, and ending up at a singular house, inhabited by a Japanese, who kept at least some 20 dogs. Unusually, the dogs were all extremely friendly, didn’t bark at the strangers, and accompanied us playfully all the way down, back to Old Manali. I wonder how he got the dogs so un-aggressive, perhaps he was feeding them the weed?

next: the road to Sarchu. 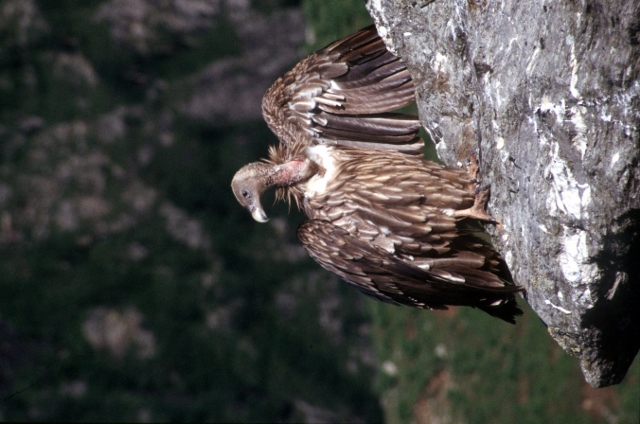 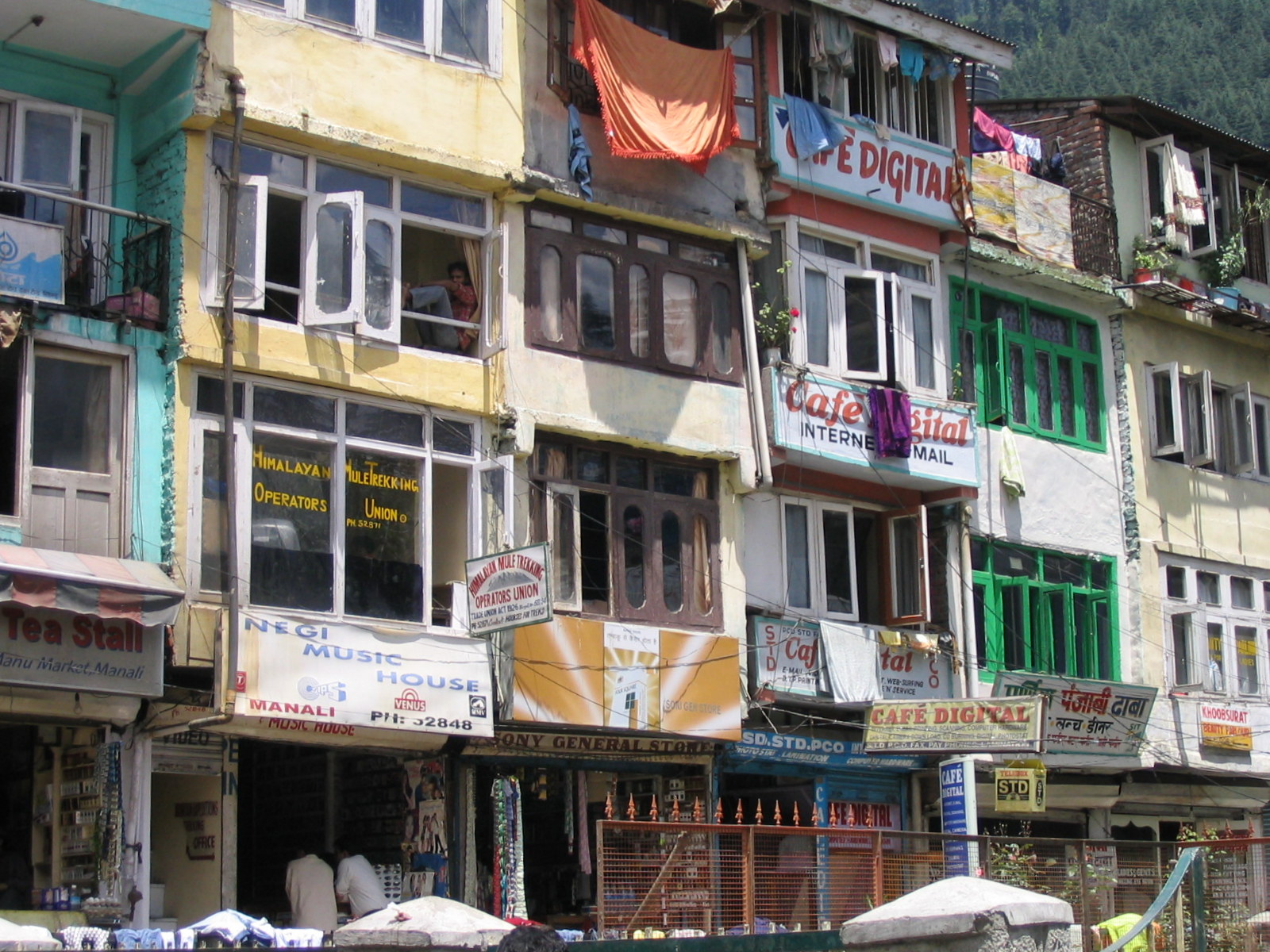