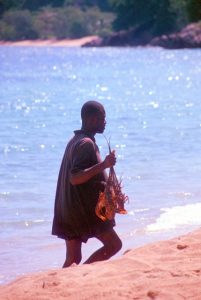 The first few weeks we stay in a hotel, an excellent introduction to the Haitian approach.

Since our arrival in Haiti some six weeks ago, we have stayed in the Montana Hotel, whilst searching for more permanent accommodation whenever time permits. The hotel is described as an expensive luxury hotel, but I would rather limit that to expensive. OK, it has a swimming pool, but you will have to find your own towels and your own drinks, service is an alien concept here. And even if a waiter has the initiative to turn up at your table, it is unlikely that he will be back with your order within the next half an hour, or so. And the tennis court? Haitian daytime temperatures determine that one can really only use the court in the morning; without lights, the evening doesn’t work, and it is dark by 6.30. But as we are in the rainy season, it usually pours at night, and early morning the tennis court is still flooded.

Breakfast is a daily struggle to try to attract the attention of one of the waiters, which is a necessity to obtain coffee or juice. And oh my, what if you have the uncanny idea of ordering eggs, fried or boiled or whichever way. I am convinced that they make each guest wait 45 minutes just to discourage them to order eggs again! I have studied the behaviour of the waiters in detail – I did order eggs occasionally, so I had plenty of time – and it is actually quite funny to see how some of them really try to hide, behind pillars, or at the far end of the terrace, to avoid doing anything. And if they do get pressed into activity, it is slow motion only. Only when the owner of the hotel turns up, an old frail lady, who has lunch or dinner in the restaurant occasionally, the pace quickens somewhat, but just for 15 minutes or so, then everything returns to normal again.

As I said, it is rainy season, and every evening, around 6 or 7, it starts, often pretty hard. Some places, most notably the corridor from the lobby to the dining area, are leaking, to the extent that half of the corridor will be flooded after the first heavy showers. And every evening again, one or two waiters are mopping up the water, for hours, if necessary, for instance if it doesn’t stop raining until late. Somehow, nobody has yet got the idea to repair the leakage. Above our room, on the top floor, people were working to add another floor, and one day, over-enthusiastically, the work resulted in large cracks above our balcony door. Although we have pointed this out repeatedly to the hotel management, nothing has been done so far, and indeed, yesterday it rained so hard that the cracks washed open, and the water streamed happily into our room, flooding it, and forcing us to quickly change into shorts and flip-flops. In the next ten minutes, the flooding expanded and continued into the corridor, with water subsequently rushing into other rooms, but we did not witness this in detail anymore. As quickly as possible we grabbed all our things, stuffed it together in our suitcases, and moved out to another room, which was reluctantly made available. Service? Apologies?

Never mind, the hotel does have its good sides, too, not in the last place the fish nights every Friday. ‘Fish night’ really consists of bringing in a huge crate full of live lobsters, you select the size, and they do the cooking. And, although we did not appreciate it so much at the time, the hotel also had almost continuously electricity and water……