Of food and drink and international trade 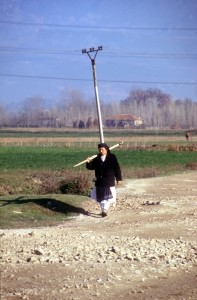 Albanian woman in the countryside

With the conflict in former Yugoslavia in full swing in the 1990s, Albania had become an important transfer station between the world of refugees and the Italian shores of Europe. Spin-off was that illegal imports from Italy, on the way back, became a welcome supplement to the locally available produce.

I think it is fair to say that Albania didn’t produce anything that was of interest to the rest of the world, at the time we lived there. Local industry dating from communist times produced inferior stuff, if it produced anything at all – many factories, like the huge steel plant in Elbasan, were out of order. Yet, some form of international trade was flourishing, largely thanks to the war in Serbia, Croatia and Bosnia-Herzegovina. 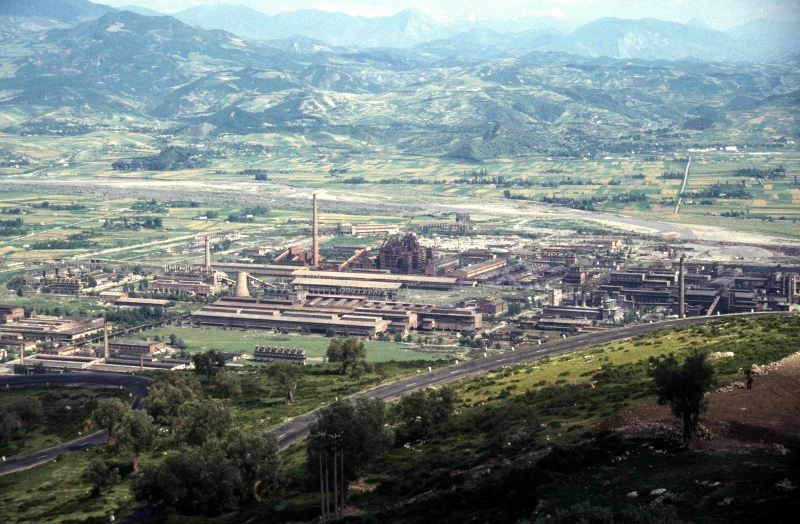 Firstly, there was the sanction-busting. The international community had decided that Serbia (rump-Yugoslvia, which at the time also included Montenegro) would not receive weapons and fuel from abroad anymore. I don’t know much about the arms trade, but in the north of Albania a lively oil trade developed almost immediately. Every night ships loaded with fuel would depart from the Albanian shores of Lake Skodra, to be offloaded – and sold for huge profits – on the other side, in Montenegro. At the same time a Montenegrin boat would cross empty, to return full the next night. At one stage the crews agreed to swap boats in the middle of the lake, to save time, but after the Albanians kept on putting forward their most decrepit vessels, keeping the nice and shiny Montenegrin boats for themselves, this great idea was abandoned again. The sanction busting was so important for the Albanian economy, that soon after the Dayton agreement (that made an end to the war in former Yugoslavia, and thus to the sanctions) the Albanian currency, the lek, devaluated dramatically. Fuel prices came down, too, stocks reserved for smuggling were suddenly obsolete, and bread prices rose, as the wheat that the Serbians had sold cheaply in Albania could suddenly command a better price again somewhere else.

The other successful ‘international trade’ was that of refugees and illegal immigrants, who would in the past have travelled overland through Serbia and Croatia to Europe, but now were forced to deviate through Albania. Criminal gangs quickly stepped into the business of human trafficked. Speed boats all along the coast would be packed with Kurds, Pakistani or Chinese (in those days), going rate for a one-way ticket to Italy apparently around the US$ 600. Initially, they would be taken onto the sea, and after a few hours of touring around dropped at a beach, told to hide until the sunrise, and then start walking land-inwards – only to find that they were still in Albania, they had been dropped back on a deserted beach! But even the crooks realized that this would damage their business in the long term, so many did make the crossing all the way to Italy.

And this is where the link with food and drinks comes in. The speedboats full of refugees were not going to return empty, of course, so were stacked with all sorts of Italian delicacies, good wine, salami, olive oil, anything that could be sold for a handsome profit back in Albania, through the many ‘general stores’, or quite openly at a parking lot north of Tirana. One night we witnessed the ‘import’ ourselves, staying in an almost abandoned hotel in Dhermi, along the Southern coast. Naively, I had been wondering how this place, without any visitors, could survive – we were the only guests, on a weekend night -, until I was woken up by the noise on the beach at three am, and the sound of engines. Several speed boats were approaching the beach, which by now was illuminated with flood lights. Lots of people were busily transferring goods from the boats into the many vehicles that had accumulated on the same beach, including the local police Landrover. An hour, or so, later it was all over again, and Dhermi returned to its sleepy self, however deceptive the image.

The ones who benefitted most, perhaps, from this lively import business were the several Italian restaurants of Tirana, who served a great variety of excellent food. Most notable was the place that had fresh seafood every day, and prepared the most fabulous pasta di frutti di mare, stacked with lobster, calamari and vongole. Only problem was that many of these restaurants would come and go, sometimes disappear already after a few months again. You wonder whether the restaurant business was really the main business. 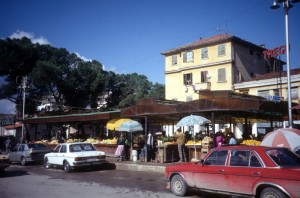 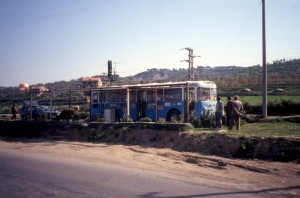 an old bus, turned into a bar-bufet along the road

Of course, Albania also produced its own food and drink, sold in the markets. Culinary highlight was roasted goat, which many an Albanian cook in roadside restaurants managed to prepare to perfection. Unfortunately, the accompaniment of Albanian wine, exclusively provided by the state company Albavin, was a bit of a hit and miss. True to communist ideals, all grapes were equal in the eyes of the factory, no matter where they came from, so one day you would have a batch of bottles from one of the better grape varieties grown on the southern slopes of a great terroir, yet the following day you would encounter the worst wine has to offer, in exactly the same bottle, same label. We flushed quite a lot of wine through the sink, in those two years, but at a few dollars per bottle that was an acceptable risk to run.

Thinks were better with the raki, the national drink. Albanian raki has little to do with its better-known Turkish anis-flavoured namesake, except perhaps that the word was introduced during the Ottoman occupation. Albanian raki is mostly distilled from grapes, something every self-respecting Albanian grows in his garden, or patio, or balcony. And although you can buy factory-made raki from the shops, for less than a dollar per liter, no self-respecting Albanian will drink this, no, they will produce their own. I have to admit that it is not my favourite drink, but the advantage of home-distilled raki is that it comes without preservatives and other chemicals, and by moderate consumption without headache the next morning. And some variations, for example the one made from raspberries instead, by the uncle of one of my colleagues, were actually very nice.

Luckily, a good bottle of Barolo or Italian grappa was never far away.