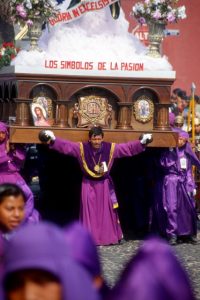 Many places in the Catholic world organise processions during Semana Santa, the Holy Week leading up to Easter, but none do it as extravagantly as Antigua Guatemala. The tradition arrived on the back of the Spanish colonial power, in 1524. Every self-respecting church in town – and there are quite a few! – sponsors a procession, which consists of huge floats (Andas, in Spanish) carried by people associated with that church. The men (Cucuruchos), dressed in purple cloaks, carry the wooden sculptures of Christ and the cross, the women (Cargadoras) carry sculptures of the Virgin Maria. The processions, during the entire Holy Week, culminate in the ones on Good Friday, which enact Jesus’ walk to the cross. After three o’clock on Friday, the hour of Christ’s death, the processions change; everybody now goes dressed in black, and continues until deep in the night. 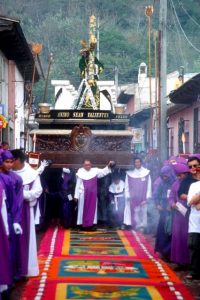 huge floats are being carried through the streets 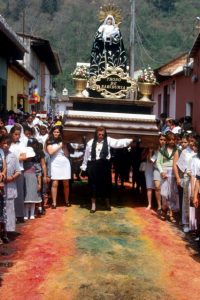 not only by men, also by the women, who carry the Virgin Mary

It is an honour to participate in the carrying, but also a burden, as many of those floats weight well over 3500 kilograms, and require up to eighty Cucuruchos, who are constantly being relieved by others during the procession. They are accompanied by brass bands, groups of Roman soldiers and lots of incense-burning, all together creating a solemn atmosphere. 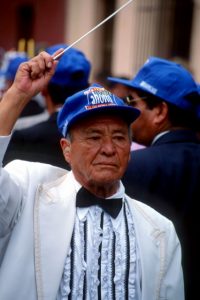 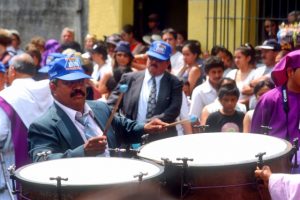 which include the drums 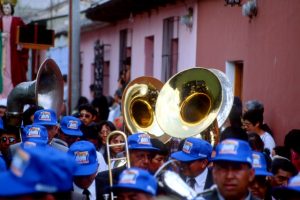 as well as the brass 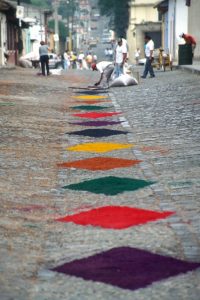 the beginning of an ‘alfombra’ 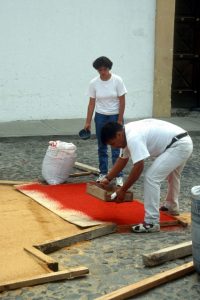 use of coloured sawdust 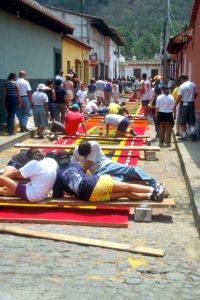 and the last hand being laid, without damaging the earlier work 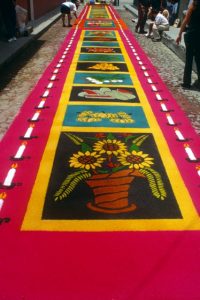 the end result, one of the carpets, sunflower design 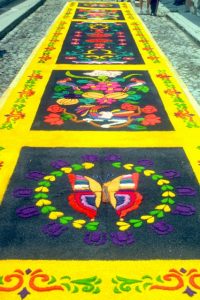 and another one, different design 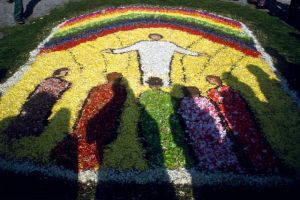 A particular aspect of the Antigua processions is that the local residents, on the day before the final processions, decorate their streets with elaborate carpets (Alfombras) made of coloured sawdust and flowers, fabulous creative constructions meticulously put together by people ultimately sitting on wooden planks above the carpets not to damage them, whilst putting the final touches. They easily spent a full day making those alfombras. Which are then trampled over by the procession and destroyed in minutes. 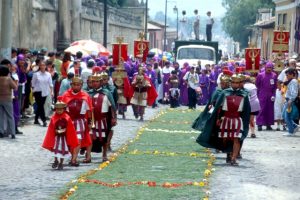 the Romans are coming, at the head of the procession 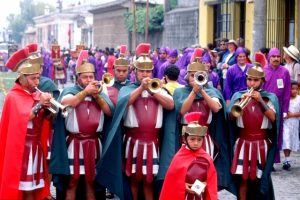 they, too, make a lot of noise 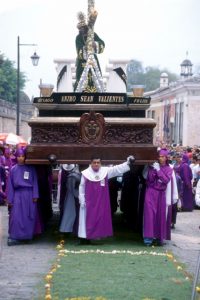 one of the many floats 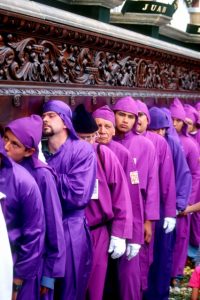 carried by many, in purple cloaks 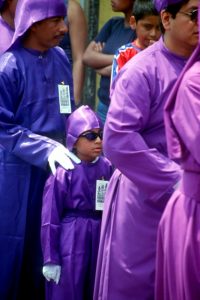 even the young, with sun glasses, participate 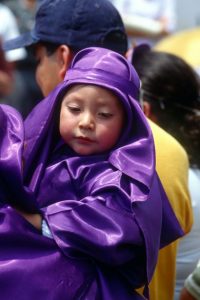 some of the young are being carried, instead of the floats 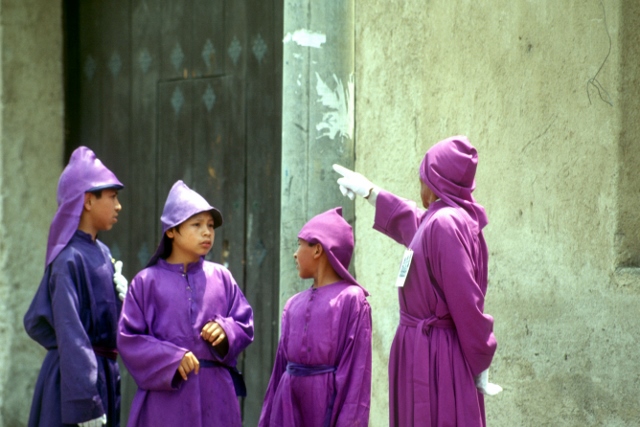 and not everybody carries, all the time 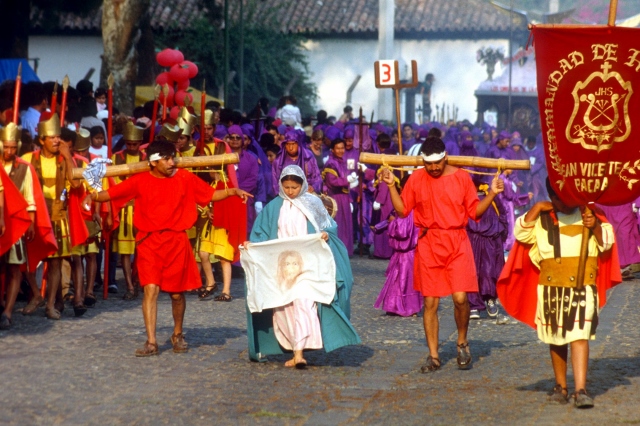 there are different processions, too and not all carry a float 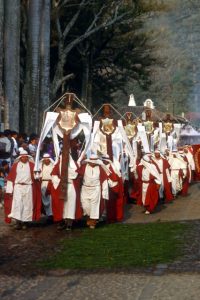 and not all are dressed in purple 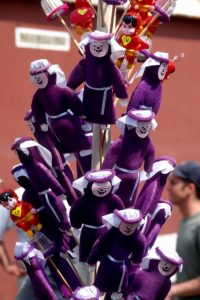 toys made for the day 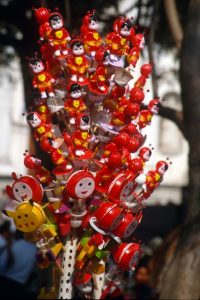 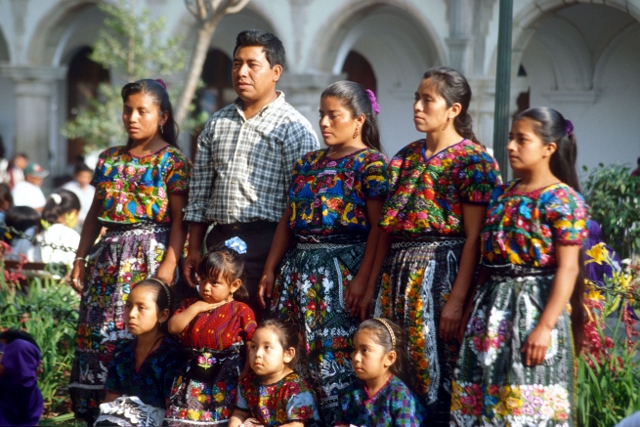 and taking the opportunity for the family photo 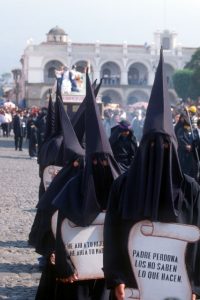 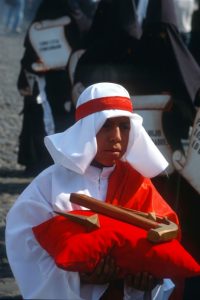 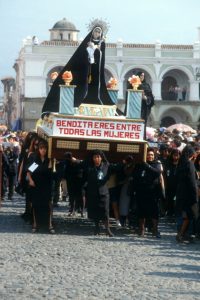 another Virgin Mary, carried by the women 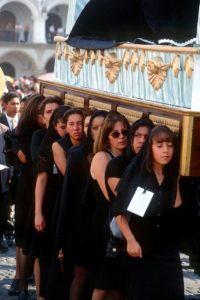 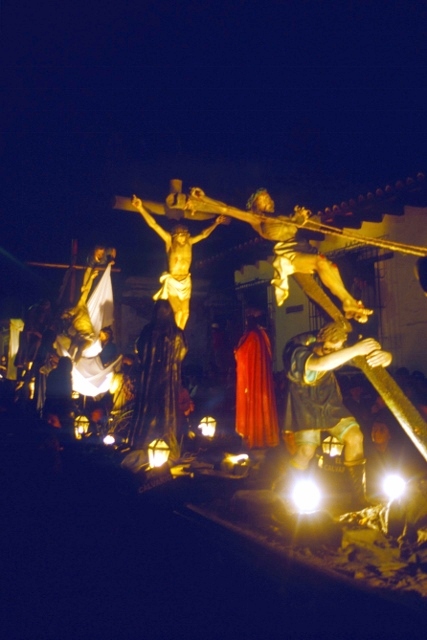 the Good Friday processions continue until deep at night