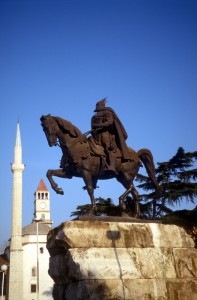 statue of Skanderbeg in Tirana

Not really a memory, but some relevant historical framework is helpful to understand where Albania, and the Albanians, come from, to put thing in context. Having been perhaps the most isolated European country for a long time, and not very accessible, many may not have any idea at all about Albania’s history, from Ottoman province to kingdom to communist paria state.

The earliest traces of Albanian history are from Greek and Roman times, what is left of the towns of Apollonia and Butrint. Here one also finds the earliest Christian churches, predating  the 11th Century East-West Schism that not only split the up to then fairly homogenous Catholic church, but also the territory of Albania. From the early Middle Ages the north becomes Roman Catholic whilst the south belongs to the Orthodox Church. A further religious division occurred from the Ottoman Empire occupation that started in the 14th Century, and which introduced tax breaks for Muslims – triggering a massive conversion of opportunistic Albanians to Islam, mostly in the Central Albanian lowlands. Some 65% of the population was Muslim in the 1990s, when we were there, but this was changing in favour of the Orthodox Church again, as many Albanians sought work in Greece, and thought nothing wrong with pragmatically adjusting their religion. 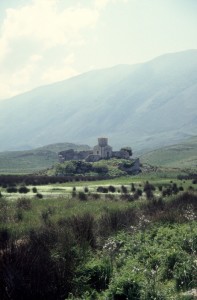 Orikum church, a Orthodox church on Karaburunit peninsula in the south 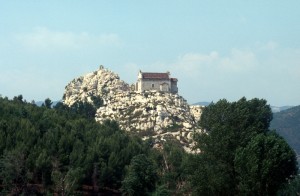 a Roman Catholic church on the way to Tropoja, in North Albania 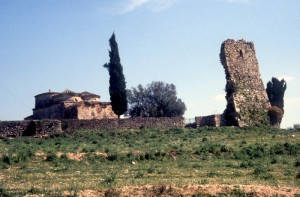 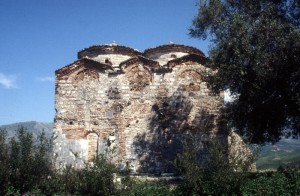 Shen Kolli church, from the back 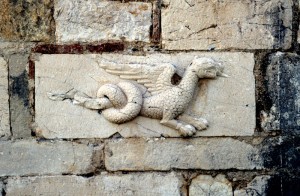 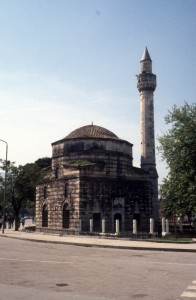 an old mosque in Vlore

The Ottomans finally subdued all of Albania at the beginning of the 16th Century, but not after having had to battle with their erstwhile army commander, George Kastriot Skanderbeg. Whether he really was the freedom fighter as claimed in present-day Albanian history, or an opportunist who wanted to grab a piece of territory for himself, who knows, but fact is that Skanderbeg is now the Albanian national hero, revered for his fierce resistance to the occupiers.

The Ottoman Empire started to crack already at the end of the 19th Century, and in 1912 Albanian independence was proclaimed, formally endorsed by the European powers in 1913. Only to be overrun by all kind of foreign troops again, during the First World War. But in the early 1920s Albania’s independence is once more confirmed (although not without recognising the ‘special interest’ of Italy), leading to elections and the rule of Ahmet Zogu, first as interior minister, then prime minister, subsequently as commander in chief, and then as the first President of Albania. In 1928 he even has himself crowned as King Zog I – you get the message, democracy derailed. Zog is forced to flee 10 years later, and subsequent Italian occupation covers most of the WWII period, until liberation in November 1944. 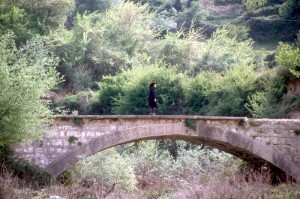 After the war, the communist party, with Enver Hoxha as its party secretary as well as commander of the armed forces – yet another aberrance of democracy -, grabs power, initially leaning towards Yugoslavia. But in 1948 the influence of Tito is thrown out, in favour of cosy-ing up towards the Soviet Union, only to break with the Soviets again in 1960, and set up relations with the only communist power not yet courted, the Chinese. With whom relations were broken off in 1978, because of ‘ideological difference’, whatever that may mean in tiny, now completely isolated Albania. 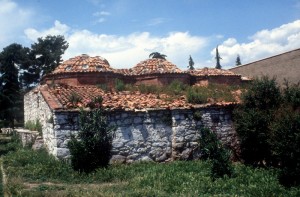 a Turkish hamam (bathhouse) near Elbasan

In this environment Hoxha, still the main man, created the Great Lie of Albania, making Albanians believe that their country was paradise on earth, in fact so attractive that a joint Soviet-American initiative was underway to come and occupy this paradise. Which needed to be defended, for which no less than 700,000 concrete bunkers were constructed (more about that later). And for which any views other than the official state-approved vision had to be suppressed, by all imaginable and unimaginable means. Obviously, since Albania was paradise, there was no need to allow anybody to watch foreign television – just in case anybody would have had a television -, or listen to foreign radio. To make sure, the Secret Service had spies everywhere; it has been suggested that around 1/3rd of the population was in one way or another on the payroll of the Secret Service. Children spying on their parents, for instance. All to make sure that nobody would find out what really went on outside Albania’s borders. I have spoken to people who went to the occasional foreign congress in those days, and who were carefully instructed on their way out of the country, and again upon their return, on what they were to tell back home, and what not to mention. To maintain the Great Lie. 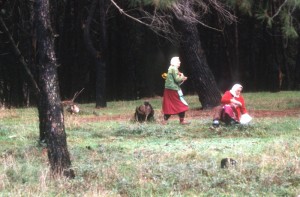 Albanian women in a forest in the north

Hoxha died in 1985. And with the collapse of communist countries around them, Albania also imploded in 1991. Satellite dishes were introduced, and the Great Lie was exposed. When we arrived four years later, the post-communist ultra-capitalism, free for all and especially for the non-scrupulous and the cunning, was in full swing.