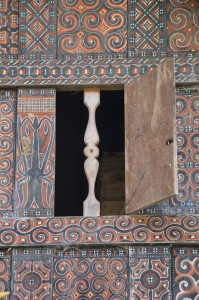 window of a Tana Toraja tongkonan 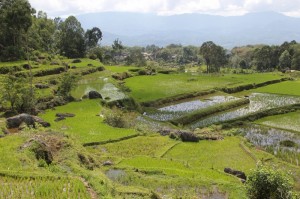 The most popular tourist attraction on the island of Sulawesi is no doubt Tana Toraja, a mountainous region on the southern peninsula. And with reason: apart from considerable natural beauty, steep ridges providing sweeping views over rice-paddy filled slopes and valleys,  the area is home to villages with scores of remarkable houses, and to people with an obsession for burials and associated  ceremonies. 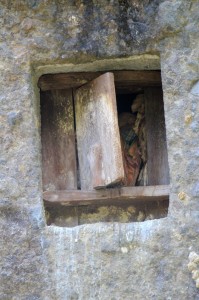 tau tau – wooden effigies – on a balcony near Suaya

It has been said that the Torajan works his entire life for no other reason than to pay for sending off the dead. Deceased are buried in caves, and where there are no caves, they are put in chambers hewn out of solid rock. Wooden tombs are also being used, structures in the form of tongkonans – traditional houses -, but much smaller, or coffins are left on ledges, or in trees. Anything goes, really. Especially the rock graves are adorned with tau tau, wooden effigies of the deceased, which wake over the dead. Unfortunately, they have also caught the eye of collectors, and many tau tau galleries have been raided in the past, to the extent that many Torajans now hide their tau tau; a case where those guarding the dead have to be guarded by the living. 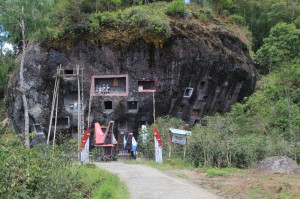 mausoleums hewn out of a rock face near Lokomata 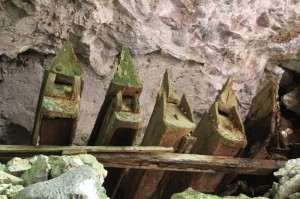 coffins in a cave near Tampangallo

Every burial calls for a huge ceremony, lasting several days and designed to impress: what counts is how many animals – buffaloes and pigs – are being killed to feed the guests. The ceremonies have become an important element in the tourist trade as well, with guides arranging invitations and busloads of tourists turning up for an hour or so, to snap some pictures, preferably of the slaughter. Somewhat cynical as I am, I wonder whether July and August are indeed traditionally the months in which burials take place, or whether this has been adjusted to accommodate tourism, too – although I don’t understand the business model behind it, I don’t think people are required to pay to attend (unlike, for instance, with initiation ceremonies in South Ethiopia). 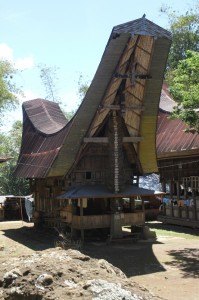 tongkonan, with its typical roof, decorated panels, and buffalo horns 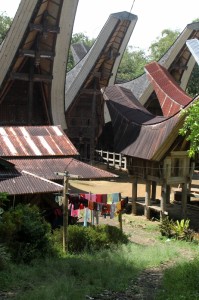 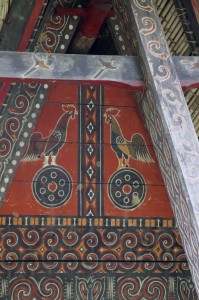 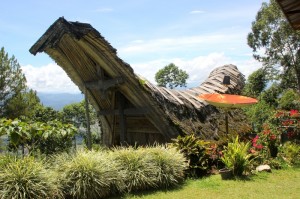 old tongkonan, with modern addition in the form of a satellite dish

The houses are similar to, but more elaborate than those in the Mamasa valley. Called tongkonans – traditional houses -, they are covered with tall, overhanging roofs, in the shape of a boat or a saddle, and have the buffalo horns of those animals slaughtered for the burial ceremonies nailed against the front pole – or, if there are too many, along the sides of the houses. Buffalo horns is an expression of wealth, of course. Further decorations come in the form of carved animal heads, carved poles, and extensively painted wall panels, in front and in the back, with standard subject matter bulls, horses, birds and cocks in black, orange, yellow and white. All full of symbolism. So is each house aligned north-south, separating life and death, with the front door facing north, separating the human and the divine world. Unlike in Mamasa, not all of the tongkonans are old, many are recent constructions, another status symbol. 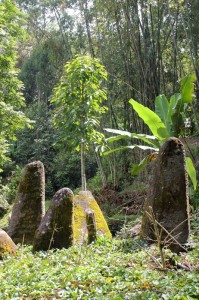 one of the characteristics of Toraja villages are the rante’s, ceremonial grounds, which are often covered with huge megaliths

Many villages have a rante, a ceremonial ground, often a little away from the houses, where people gather during celebrations. What makes these rantes mildly interesting are the monoliths that dot the fields, sometimes up to four meters high.

Although there is an airstrip in Rantepao, the cultural centre of Tana Toraja, no airlines regularly serve the place, which means that the quickest access is by eight-hour overnight bus from Makassar. Despite this considerable limitation, tourists have been flocking to Rantepao in numbers. And this has affected the way locals treat foreigners: the proverbial friendliness and hospitality one encounters everywhere in Indonesia is less obvious in Tana Toraja, here you are nothing special anymore, just an object and a business target. Aggressive tourist guides want to take everybody to the first available burial ceremony, where the uninitiated tourist subsequently misbehaves in the eyes of the local people (and with some reason: how many pictures would you normally take during a funeral at home?), which erodes respect, only partly compensated by the potential financial reward of having tourists.

The influence of foreigners on local culture is also obvious. Small children use the F-word, and the middle finger, probably not even knowing what it means – although they only do it from a safe distance, so they do know it is something bad; they didn’t learn this from their own parents, I think. There is a significant amount of begging going on, unusual in Indonesia outside the big cities. And each and every tourist site charges an entrance fee, often well sign-posted – and, credit where credit is due, accompanied by what looks like a genuine ticket. And those sites, that’s really what you have come to see. And they are definitely worthwhile, in many cases unique. 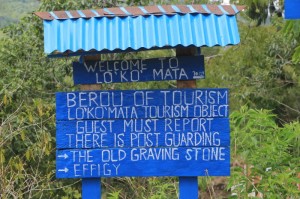 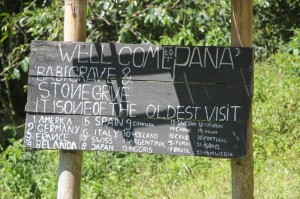 another signboard, this time announcing Pana and its various attractions

The virtual tour: Below I have covered a few of those sites, by far not a complete list, with links to separate entries with a little more text, and many more photos. (At the end of each entry a link takes you to the next, should you want to make a virtual tour of Tana Toraja.) 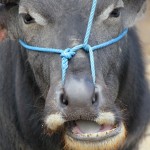 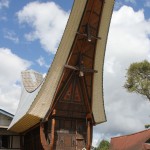 The biggest attraction in Rantepao, the main town in Tana Toraja, is the buffalo market, every six days in the Bole area, at the edge of town. Nearby, at the other side of the Sadan River, is what I call Bolu village (I don’t know the real name), a number of compounds with tongkonans and rice barns, which give a good first impression of the Toraja architecture. 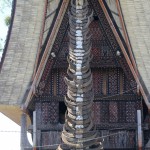 East of the Bolu area, and walking distance, is Marante, another community rich in tongkonans. From here one can walk around and back to Rantepao in a few hours. 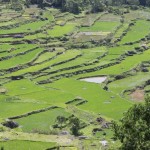 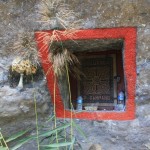 An attractive day trip leads northwest of Rantepao to the village of Batutumonga – fabulous views on the way -, which can be reached by car, and then on to Lokomata, famous for its huge mausoleum: tens of tombs hewn out of a solid rock face. Along the road between the two there are further views of rice paddies as far as the eye can see, and several tongkonan compounds, with some houses even sporting the original thatched roofs. 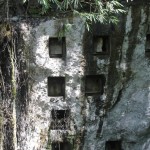 From here you have to backtrack to Batutumonga, from where an alternative road leads back to Rantepao via Pana, a village with tree graves, more rock tombs, and monoliths. 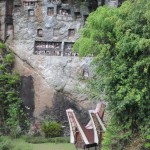 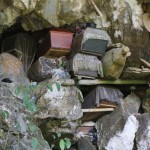 South of Rantepao are the easily accessible – and thus very touristic – sites of Londa, with its natural caves stuffed with wooden coffins, spilling the bones, and Lemo, best known for its rows of tau tau, wooden or bamboo puppets, effigies of the dead, guarding the cave tombs. 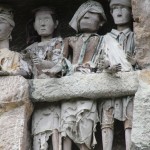 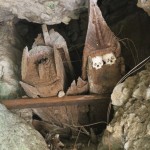 Far more interesting, however, and less touristic because larger buses cannot reach, are the sites of Suaya, similar perhaps to Lemo, but more spectacular rows of tau tau, and even a small museum, and Tampangallo, possibly the most evocative site in entire Tana Toraja, a natural cave full of coffins stacked high up the cave walls, rows of tau tau, and bones and skulls in every corner, skulls neatly stacked. 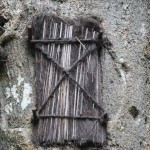 On the way back to Rantepao is Kambira, another site, known for its tree graves for small children.

With more days than the three or four we spent in the Tana Toraja area, I am sure one can visit many more villages, make many more spectacular walks. But there is a limit to the attraction of tongkonans and rock-hewn graves, and to the admiration of rice paddies – after all, they all do look the same, after a while. But Tana Toraja as a modern-day cultural and anthropological museum should be on everybody’s Indonesia itinerary, despite the challenge to get there, and despite the touristic development already well underway. A place not to be missed.

And there is more in Tana Toraja!