The bunkers The Ardenice monastery 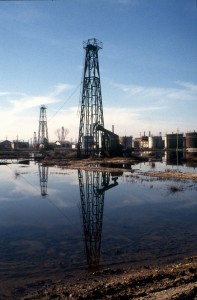 In the 1920s an internal company report by a BP executive boldly stated that looking for oil in the Middle East would be a waste of time; instead, Albania would be where the oil boom would take place. It turned out to be different, but the country does produce humble amounts of oil, from fields that contain forests of derricks and nodding donkeys (pump jacks).

In the mid-90s Albania’s oil production was around 10,000 b/d (barrels per day), which is very modest. The oil came from thousands of shallow wells that needed nodding donkeys to pump up the heavy crude and were no more than a few hundred meters apart. This created an apocalyptic view, of the Patos-Marinza field for instance, an oil field located on the coastal plains and visible from afar, thanks to the hundreds, if not thousands of closely spaced production wells. What is worse, oil was leaking out of every pipe, every joint, every nodding donkey, polluting the fields and the rivers. In the hills, where another oil field, the Ballsh field, is located, oil leaking from wells up the slopes leaves black trails of hundreds of meters long, and several meters wide, on its way down, into the river. I was told by one of the older staff from Albpetrol, the state oil company, that some years ago, when five-year plans still mattered, an enterprising petroleum engineer designed a scheme to beam off one of the rivers, to boost oil production: they actually produced 90 b/d from this scheme, their best producing ‘oil well’ in the entire country! 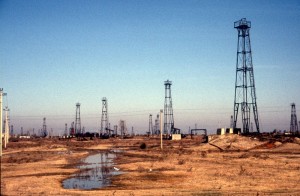 the Patos Marinza oil field, the biggest field of Albania 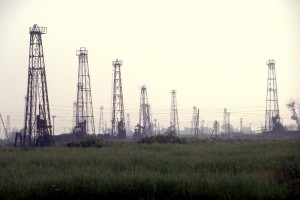 forest of derricks and nodding donkeys at the Patos-Marinza field 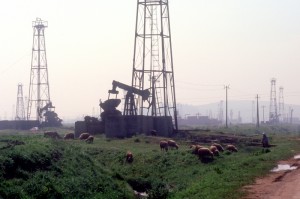 the oil fields are shared with the sheep 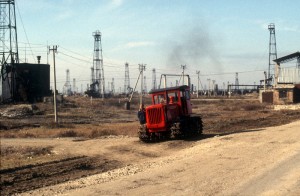 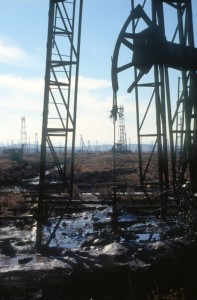 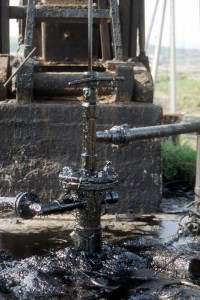 oil loss through the connections at a production well 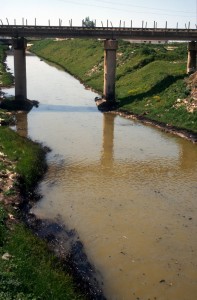 oil pollution in a stream near Fier 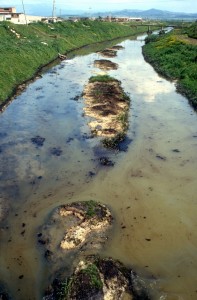 oil floating in a small river near Patos-Marinza 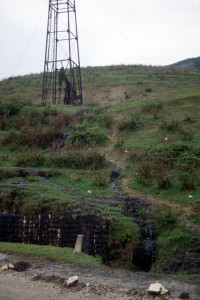 crude oil flowing off a slope, near Ballsh 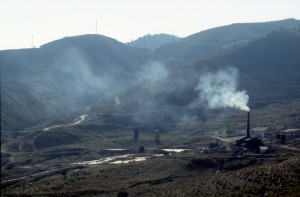 oil installations near the village of Ballsh

Whether Albania will ever fulfil the early BP promise remains to be seen. My employer at the time, Shell, deemed the risks too high, and bowed out after two years without drilling an exploration well. No other oil majors, not even BP, have shown any real interest. But Albpetrol will still be there, with its headquarters in Fier, a place I visited many times. Every one of those visits started with a strong coffee in the bar-bufet around the corner of their compound, followed by a shot of Skanderbeg cognac, before nine in the morning. And then we would start trying to unearth the resources, sometimes huge stacks of paper data, painstakingly written, with pencil, on sheets of white paper, painstakingly turned into lined paper by more pencil work, and a ruler – illustrating the lack of supplies this country suffered for so long -, at other times rock samples from wooden crates, or liquid oil samples kept in glass laboratory bottles. The best memories I reserve for my first appointment with the exploration director, carefully explaining that Shell needed local geologists and geophysicists, and whilst not wanting to rob Albpetrol of their brightest staff (a white lie, of course, we wanted the brightests), what better place to find them than at the local oil company. To which he answered: “look no more, I am your man!”

A year, or so, later I was invited to the celebration of Albpetrol’s 25th anniversary, an occasion that was also used to commemorate some of the employees, directors, managers, drillers, geologists, who had not survived the political pressure that was Albpetrol’s share. Apparently, Enver Hoxha was convinced that oil flowed as a sort of underground river in the subsurface. For close to two hours I have been listening to the names, and histories, of those who were deemed an enemy of the Albanian people, or saboteurs in the service of a foreign power bent on weakening Albania, for failing to discover oil, and who therefore had been executed by the regime. Spine-chilling, despite their official rehabilitation at the conference. Glad that my employer didn’t apply the same philosophy!

In the light of such an atmosphere, combined with its almost total isolation from scientific developments in the rest of the world, it is in fact remarkable that Albpetrol functioned as it did, perhaps not the most innovative oil company, but quite successful nevertheless. 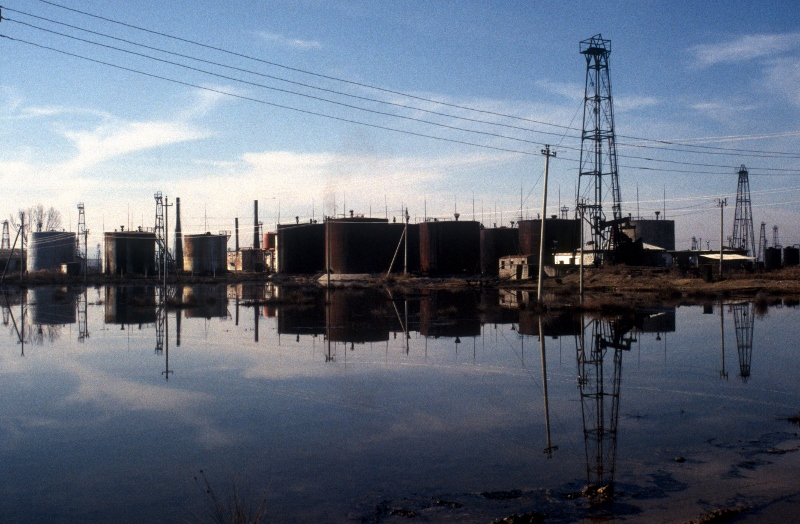