the journey the laptop tribe

Arriving by air to Port-au-Prince immediately shows you what’s in the mind of the people: from above you clearly see a tent or some plastic sheeting next to almost every house, people don’t dare sleeping inside anymore. They don’t know how much their house has been damaged. They don’t know what the next aftershock is going to do to them. But they also will not leave their possessions behind, inside the damaged house, unprotected.

The airport itself is no longer the chaos it was shortly after the earthquake. In fact, going through the airport gave me an acute sense of familiarity. Immigration was a low key affair. Multiple porters were available, and most willing, to help with luggage. And outside the terminal building it was the usual pandemonium of cars and people waiting. Just like before, just like almost 10 years ago, when I arrived here for the first time.

Driving from the airport to the office also was immediately familiar. The Bougainvillea in the gardens, the pigs going through the rubbish that has been collected and left at the street corners, lots of people in the road, the taptaps – the pick up trucks serving as local transport – slowly inching forward, blocking the traffic whenever they let people in or out. But directly outside the airport is the first tented city, here fairly well organised. That wasn’t there before. Further down there are lots of make-shift tents, tarpaulins, in every open space imaginable. Streets seem to have been largely cleared from rubble, in fact most houses here are still standing, but the occasional compound wall has collapsed, and big cracks have appeared in others. Then I also see individual houses that have collapsed, often the roofs just fell down; some multiple storey buildings are now no more than multiple concrete slabs. There is no way anybody inside would have escaped, would have survived the collapse. Strangely many of the neighbouring houses are still standing, appear undamaged, obviously better constructed, less sand in the cement. And a little further the effects of the earthquake seem invisible again, except for the handwritten signs of the local population, asking for help, asking for food and water in three different languages – hoping to attract the attention of one of the many aid agencies whose vehicles pass their street corner.

It is only when we get near the office, which is located on the same hill as where the Hotel Montana stood, that I get my first glimpse of what really happened. From below one has a good view of the slope, and of all the houses that have either collapsed or have been damaged beyond use. The picture illustrates what I mean: there has been an earthquake here, and it was a big one. I dread further exploring Port-au-Prince.

next: the laptop tribe 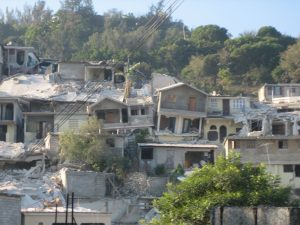 the view close to my office

One Response to the arrival