the schools (photos) the adventure

I have written about the shelter situation before, soon after I arrived, because it was one of the most visible results of the earthquake. It still is, and it is incredibly complex. I already addressed the issue of IDPs in school yards, but all in all there are estimated to be some 1.3 mln people in camps in Port-au-Prince, and their numbers are actually growing.

Who are these people? Firstly, there are a lot of people who actually lost their house, and everything else, and have nothing left: they have now found a place in one of the camps. And that’s right. But then there are also people who have a house, which may be safe to return to, but they are too scared to do so. Or they say they are too scared, but in reality they are hoping that, by being in one of the camps, they may benefit from further distributions, you never know. And if there is a chance to benefit from distributions in one camp, you might as well set up your tent in more than one camp, you never know, so there are an increasing number of so-called ghost tents. Difficult to check, though, as they may also belong to people who work during the day – and most camp management agencies don’t work at night. Then there is the persistent rumour – which I know for a fact is wrong -that people in camps will get a house and perhaps a piece of land, so, hey, let’s hang on a little longer, you never know. Others in the camps were originally renters, and their rented accommodation was destroyed. In Haiti it is customary to pay rent 6 or 12 months in advance, so if these people paid on the 1st of January, hey, they have little option but stay in the camp – little chance they are getting their money back, and for sure they haven’t got any spare cash. Even if they haven’t paid all their rent upfront, many have no money anymore to pay for 6 or 12 months, and the laws haven’t changed yet. In any case, why pay rent if you can stay in a tent for free? And you know what, the services, like health care and water, are free in the camp, you don’t have to pay, unlike in pre-earthquake times when people paid a small user fee for the clinics, so that the health workers could be paid – the ministry didn’t have money for that -, and were also used to pay for their water from a tanker or a water kiosk, 5 Gourdes (12.5 US$ cents) for a bucket-full, as running water in houses is a rarity in the poorer neighbourhoods. No wonder the camp services are so popular, also with people who do not live in the camps!

So provide the same free services in the neighbourhoods where people need to return, you would say, and they will move out of the camps. Ah, but then we are undercutting the government health services, which rely on user fees – there is nothing like free services, you either pay a user fee, or you pay taxes which pay for your services. But tax collection is not easy in an economy where 70% of the workforce survives on casual labour or is a small-scale ‘petit marchand’, an unregistered entrepreneur who sells whatever he or she can make a very small profit on. We also would kill the water business, which in the short term would not be a problem, but once we return to normal, who is going to provide the free water, in, say, a year’s time, or two? So stop the free services all together, then, that’s te solution! Ah, but what about these people who really don’t have anything anymore after the earthquake, helping them is what this was all about initially, remember? And there are still a lot of them around, believe me!

There is a strategy to relieve the pressure on the camps. It consists of five options: (1) have people return to their homes; houses are being assessed, using the so-called traffic light approach, green is OK, yellow may need repairs, and red is demolish, but the assessments are going very slow because the government has not certified anybody else then their own engineers to carry out the surveys, despite many agencies having many capable people. But then, it is quite a decision to take, no, whether you tell people it is safe to return to their houses – what a responsibility! -, or that you tell them their house, their biggest asset, has to be demolished. No wonder many houses turn out yellow. (option 2) People return to proximity sites, either a park in their neighbourhood, or to their original plot, once cleared from rubble. But this is really only a very small percentage, and is being complicated by land tenure questions, and who would own a transitional shelter put on that piece of land, the land owner or the inhabitant of the shelter? (3) People move in with host families, families who do have a house and are prepared to share – for the appropriate incentive. But it is as yet unclear what would happen after the full incentive has been paid, whether the guests are still welcome or not. (4) Or people can stay where they are: as long as not everybody does that, we can improve the camps, improve facilities and make the place less risky. (5) Lastly, people can relocate, to far-off peri-urban sites like Coreil in Cabaret, which I have described before – I will have to go and have a look there, one of these days, so I can report more expertly on this phenomenon, but so far I understand it is a piece of desert land, with nothing, no livelihood opportunities, no transport, no means of survival, really, and still, there are some 7000 people there already.

None of those options have yet seriously been applied. The idea is that people can choose. But with over 600 camp sites, large and small, and only 20% of those managed by a professional agency, registration is poor, and messaging to people almost non-existent. If you ask me, the only way to see some real movement is to wait for some really heavy rain, which makes staying in the camp really miserable, to the effect that those who have an alternative – those with a house to go back to, or a host family – will indeed move out. Failing that, we will have to wait until the Worldcup starts (Football, or Soccer, you know what I mean). This country goes bananas for football, and if we would just place big TV screens in the neighbourhoods, but not in the camps, everybody will move out every time a match of Brazil or Argentina is being broadcasted live!

Apologies for the length, today, but it is really a very complex issue. 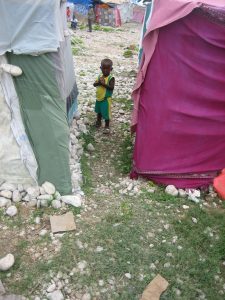 this boy may well want to move, from a pretty miserable camp 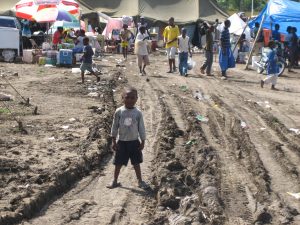 and so may he, if it rains a bit more, quite a bit more, which will make this camp one big mudpit 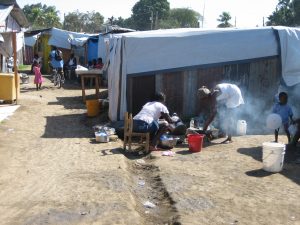 but these people seem to be quite comfortable. 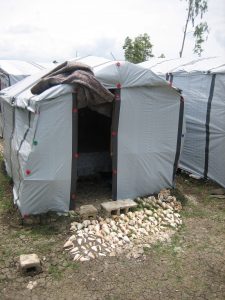 and these have no intention to move, after having invested so heavily in their porch!

One Response to the camps