the president the economy

In one of my previous contributions to the better understanding of Haiti in the aftermath of an earthquake – perhaps I adopt this as a subtitle to my blog – I mentioned distributions, of food and of NFIs. Since you may already have forgotten again what NFIs are, I’ll concentrate on food. You will understand that immediately after a disaster of this magnitude you save lives by distributing food and water, people have no access to their normal outlets. Chile was no different, a few weeks ago, and neither is any other sudden natural disaster. However, sometimes it makes sense to continue the food distribution. In the weeks after the Haitian earthquake food was in fact available, but scarce, which drove up the prices. The so-called surge, arranged by WFP, the food arm of the UN, then flooded the market through what we call blanket-distribution (to everybody) early February to bring prices down again, and indeed succeeded. And now, a month later, we have started further food distributions, this time targeted to poor households, women-headed families, elderly people or simply people that have been particularly badly hit by the disaster. They just don’t have the means to buy food yet.

Before the earthquake some 70% of Haiti’s food was being imported: this country just can’t grow enough by itself. Hundreds of years of deforestation have resulted in a bare and treeless countryside, mountainous, and by now deprived of top soil (remember the rains I mentioned?). What the earthquake did destroy was the established imported food chain, which goes from importers via wholesalers to retailers to the ever-present Madam Saras, the women selling small stock in the streets, under umbrellas or from wooden stalls. The importers have lost their ability to bring in food because of a damaged harbour, or a harbour now swamped with disaster relief goods (those NFIs, again). The wholesalers lost their warehouses – or are renting them out for astronomical amounts of money to the many aid agencies that have entered the country. The retailers have lost their shops, and often unsold stock, and the Madam Saras had bought on credit and haven’t been able to pay off their debts yet. In addition, nobody is prepared to take business risks in a market that is so fluid, and nobody wants to keep too much stock in an environment where people that have a history of getting violent are hungry. 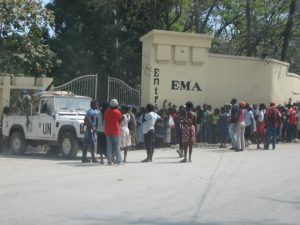 long queues are lined up outside the distribution compound, and not necessarily everybody has a coupon that lets them in, but they will wait anyhow, for hours, just on the off-chance that something will be left over at the end – even though we have explained the system to them over and over again 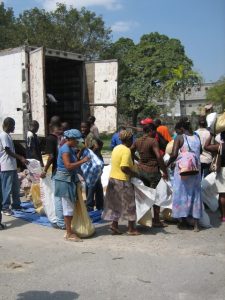 the distribution itself, people being let into the compound piecemeal to ensure an orderly process 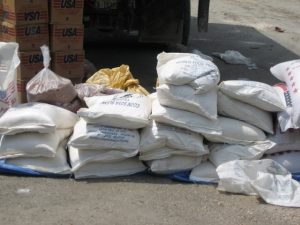 the large sacks of rice and beans 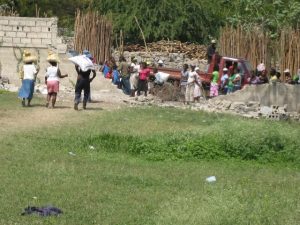 after having received the food, people make their exit from the compound, helped by porters, to the street

Anyhow, long introduction, but distribution of food is still a necessity. So I visited one of our distributions last week. Very well organised, in fact. For starters, our suggestion that food should be distributed to women, not men, has been universally adopted. Women have a tendency to either use the food to feed their family, or sell the food to use the money to feed their family. Men, on the other hand, have a tendency to sell the food and go out drinking with the proceeds, and their buddies. It happens all over the world, not just in Haiti. The identification of vulnerable families is done by community leaders, in collaboration with municipal officials. Well, not ideal, especially in urban settings where communities are a lot less coherent than in rural areas, and municipal officials may be distracted by the thought of future elections, but still, they are in fact in a better position to identify who should get additional food than outside aid agencies are, and they will be held responsible, sooner or later. I am sure some nepotism will creep into all of this, but probably most people who need it will indeed get it (I learn all this from my program director, I don’t make it up myself). So people who qualify receive a coupon, and the coupon provides access to the restricted compound where the distribution takes place. MINUSTHA troops – the UN peace keepers that were mobilised in Haiti in the 1990s, even though there had not been a war -, the same troops who accompany the food convoys from our warehouse to the distribution point to avoid the trucks being looted on the way, are present, in a very imposing way, to ensure that everything is conducted in an orderly manner. The troops are absolutely necessary, otherwise the distribution points would soon be overrun by mobs. 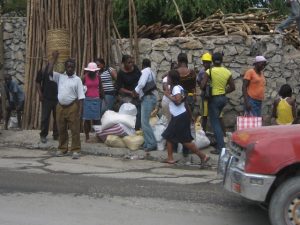 where they wait for transport with their goods – or perhaps they are selling it right there and then.

What do they get? The women receive a bag of 50 kg of rice between the two of them, a sack of pulses, cooking oil, and salt. Enough to create that quintessential Haitian diet, rice with beans, which I have been enjoying, sort of, for the last six, seven weeks. Or enough to sell it on the lively food market that has been established just outside the distribution compound and provide the necessary cash to survive another week, two weeks, or perhaps even more. Good for them!

2 Responses to the distribution