the internationals the model camp

I have written about Cash-for-Work before. The idea is that people who have nothing else to do get a job and earn a little money for two weeks, with which they can go shopping so that they start to replace lost assets whilst at the same time stimulating the economy. It doesn’t really matter what they do, really, many are clearing rubble – or shifting it from one side of the street to another, and back the next day, in the absence of a truck taking the stuff away. In Jacmel we had somebody who thought a little more creatively, and decided that if we are going to pay these people anyhow, we might as well have them do something useful. Instead of clearing rubble, we are clearing out a river bed, and we are reinforcing the banks, to avoid flooding in the forthcoming hurricane season (where rains cause much more damage than storms), avoid communities being cut off for days on end, and avoid the erosion of the banks and potential loss of property. Good idea!

So we had no less than 300 people working flat out for two weeks, clearing the space under the bridges, digging large holes to put the bottom gabions in, and collecting mountains of rocks to fill the gabions with. Gabions? Metal meshes, which are placed in the river bed and stacked against the easily-erodible river banks, then filled with rocks to ensure that they do not wash away when the floods come – and so protect the river and promote proper drainage. 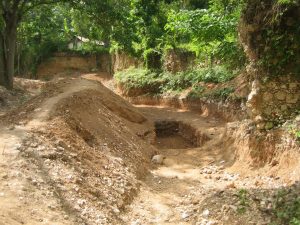 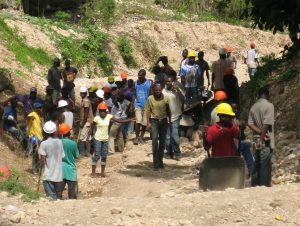 part of the crew of 300, working flat out…. well, some of them, but you have to admit, when it is so full in the river bed, it is difficult to swing your pick axe 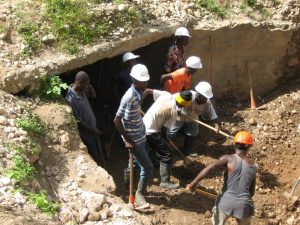 the bridge clearing team – a popular position, as this allows you to stay close to the bridge, and in the shade. By the time the opening under the bride is bigger, there is indeed space for eight man 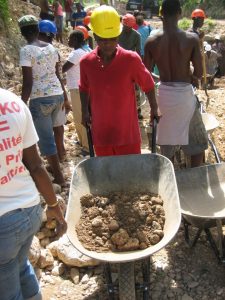 whilst this gentleman has a much harder task, shifting earth with a wheelbarrow filled to the top

Unfortunately, the project has been delayed, firstly because I was uncertain about the technical feasibility – but that has been sorted – and secondly because we couldn’t get the gabions. We now have them, finally, imported, but they are still stuck in customs – and by now the rainy season is well and truly underway, so many of the preparations will have to be done again. The humanitarian community is often blamed for the slow progress with providing help to Haiti, but let there be no misunderstanding: Haitian customs is a major factor in delaying implementation. It is not only our gabions, but a range of other goods that are stuck in customs: plastic sheeting, drinking water (pretty superfluous now, but would have been useful three months ago), school tents, education supplies, all urgently needed for relief and rehabilitation work. And it doesn’t matter whether you import through the port or across the border with the Dominican Republic, there are hundreds of trucks parked at the border. Some indeed miss a tiny little piece of paper amongst the stack of documents necessary to enter stuff into the country, but most are just there waiting, because Haitian customs is totally overwhelmed. Before the earthquake importing was already a time-consuming activity, imagine now, with so much more coming in. And hey, as customs officer you can’t run the risk that a truck with tarpaulins slips across the border unchecked – and some can also not let the opportunity go to collect some random taxes on the way, I suppose.

But, with a bit of luck, in a few weeks time we will have contributed, however small a piece, to a permanently safer environment for people in the village of Cap Rouge, just above Jacmel town. And that is nice. And what is even better, once the project is finished and thanks to the delays, significantly more than 300 people will have earned a little money to spend, or to save for even harder times.

next: the model camp 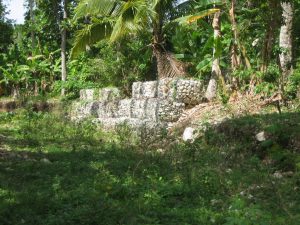 but when everything is finished, it does look nice, and what is better, it holds out against the floods 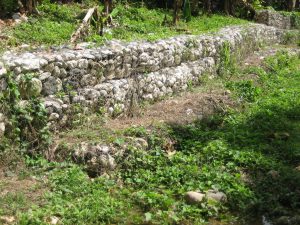 this section was done in 2007, and has survived three hurricane seasons already