the R&R the criminals

It was bound to happen, one day – in fact I remember this from the past, when it happened when the Haitian government didn’t have money to pay the bills. The country is running out of fuel. Several sources report different reasons, from an incident in Antigua that has delayed a fuel tanker, to unspecified “internal developments in Venezuela”, Venezuela heavily subsidizing Haiti’s cheap petroleum imports. But the bottom line is that many fuel stations have run dry, and others that still have some supplies have started to ration fuel distribution. Result 1: less traffic, occasionally we wheeze to the office, or back home, without the usual “blockus” at the ever-present rush hour. Result 2: long queues in front of the service stations, causing total “blockus” of some streets in Petionville, not having been designed for long queues in front of service stations. It is kind of ironic that less fuel still manages to cause a traffic jam.

But the real gem occurred this afternoon, when a water truck, one of these real heavy ones that you don’t just push aside, broke down in front of our office gate. Broke down? Not exactly, it actually ran out of fuel! And in the process, it blocked our office gate, preventing any movement in or out of our compound. Unfortunately, I had to leave for a meeting outside. No problem, of course, because we have just as many cars that cannot get into the compound as that cannot leave, so just take one of the cars that are outside. Except that all of those had also almost ran out of fuel. 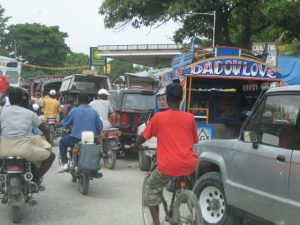 long queues in front of the service station 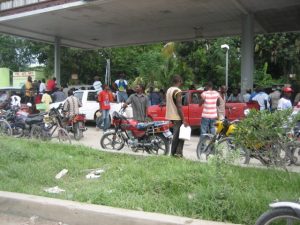 or just bringing your jerrycan on the back of a bicycle

Perhaps it is this type of incidents that could demonstrate to the world why it is in fact very difficult to quickly deliver the necessary help to earthquake victims in Haiti. We, the humanitarian community, are sometimes being criticised for the slow progress of aid delivery, for the fact that, with the rainy season upon us, there are still people in camps that have not received shelter materials. In the mean time, we need to deal with the specific challenges of Haiti, this fuel shortage just being one minor one, but oh so illustrative!

The government has promised that the next ship will arrive coming Sunday, and that within a few days more there will be plenty of fuel available again. So, no need to stock up then, everything will be OK in no time. Except that the Haitians themselves don’t believe it, and line the streets in front of the few service stations still selling fuel….

One Response to the fuel shortage