fisherman on Danau Maninjau, a crater lake on Sumatra

In December 2006, whilst based in Banda Aceh, I took ten days to travel from North to West Sumatra, on Indonesia’s third-largest island territory. It was the rainy season, but more than that tourism had been dented by the bomb attack on a nightclub in Bali, four years earlier. Below a travelogue of this trip, in three installments and with lots of photos, as well as links to specific locations with some additional information, and more photos. 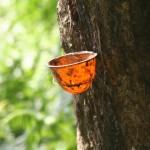 (1) From Medan, Sumatra’s largest city, to the Orang Utan sanctuary in Bukit Lawang and on to Berestagi, the domain of the Karo Batak and their traditional wooden houses

Close to Banda Aceh, Indonesia’s 3rd or 4th largest city, Medan, is mostly large and unattractive, never mind that it offers some of the comfort and facilities that Banda Aceh lacks: restaurants, super markets, cinemas etc.  The city’s mosque is a mosque like so many other mosques, and the variously called Maimoon castle or Maimoon palace, the old sultan’s residence, is in fact a rather large house, no doubt attractive at its time but now pretty run-down. Although the city still has a provincial feel over it, with the airport almost inside, and very little high-rise, shopping malls are taking over and traffic is becoming the chaos one expects from a large Asian city, albeit still dominated by rickshaws and becaks, as well as the usual army of motorbikes. Yet, the center of Medan is in fact very small, somehow stimulating becak drivers to try to drive around it several times, creating the impression of large distances, and the expectation of a higher fee.

Bukit Lawang is a three hour drive from Medan, mostly through unattractive country side, but for the last part through palm oil and rubber plantations. 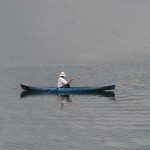 (2) Via the village of Dokan and a Batak palace to Samosir in Lake Toba, with its stone sculptures and sarcophagi, and then on to the market of Balige and the fishing communities of Sibolga

On the way to Lake Toba there is another well-kept Karo Batak village, called Dokan, which we approached after having tried the houses in Cingkes, which were totally dilapidated. The drive, through more clementine country again, was beautiful, with all the various shades of green complementing the orange bundles, and the plentiful flowers in red, yellow, pink and purple. And Dokan was a delight, with at least half a dozen Rumah Adats still in full use, and in excellent state of repair.

At the head of Lake Toba, the view of which, in the cloudy distance, was somewhat less impressive than all the tourist brochures and guide books had made me believe, is the Sipiso-Piso waterfall, a pretty narrow waterfall, but high enough to convince me not to walk all the way to the bottom. 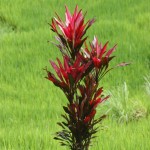 (3) Entering Minangkabau country on the way to the hill resort of Bukittinggi, also stopping in the steep Harau Canyon, the traditional village of Sumgayang, and the spectacular Danau Maninjau crater lake, before descending to Padang on the coast

The road to Bukittinggi continued along the Highway, still a two lane affair, past several river valleys, somewhat monotonous scenery. It was cinnamon harvesting time, plants in red, and the large brown hollow sticks being collected. Villages here were more primitive than earlier in Batak country, compact – buildings close to each other -, mainly made up of sturdy wooden houses, not all traditional, but often nicely painted, with shutters and curtains in the windows. Usor Tolang actually had a nice collection of fine Rumah Adats, but foreigners here are obviously the exception, a reason for children to follow you everywhere you go. Even adults thought it more interesting to share my table in the otherwise empty restaurant, just to stare at me, too shy, and perhaps short on English – combined with my lack of Bahasa -, to embark on a conversation.

Bukittinggi is in the heart of Minangkabau country, another Highland people in Sumatra, with their own distinct architecture, already visible from the villages in the approach to town.