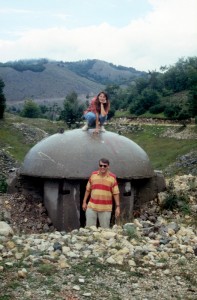 In Spring 1995 we arrived in Albania for what would turn out to be a two year assignment, working for a large oil company. In those two years we not only travelled almost the entire country, but also experienced life in a former communist country, with all its growing pains, its opportunities and failures, and its transition towards an ultra-capitalist system. Some of my memories of those days are unbelievable, others are funny, or sad, or just worth noting down, not to be forgotten in a rapidly changing country. I have collected many of them here, from memory – so they may not be exactly accurate -, or from letters I wrote at the time. Wherever possible I have tried to illustrate them with slides, many of which I unfortunately scanned too late to prevent some discolouring of the originals. 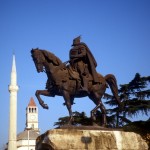 Some history: Not really a memory, but some relevant historical framework is helpful to understand where Albania, and the Albanians, come from, to put thing in context. Having been perhaps the most isolated European country for a long time, and not very accessible, many may not have any idea at all about Albania’s history, from Ottoman province to kingdom to communist paria state. Tirana: In the mid-1990’s the Albanian capital was a pleasant, rather quiet town, with a somewhat provincial atmosphere, except that small-time business was booming uncontrollably. Parks and pavements were crowded with the ubiquitous bar-bufets and the euphemistically called general stores. 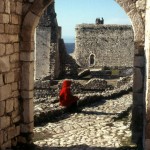 Kruja: Kruja was were Albania’s national hero Skanderbeg had his castle. The citadel, an impressive structure built on a rocky outcrop high above the surrounding lowland, is visible from afar, and as it is relatively close from Tirana, made for an attractive day trip with visitors. 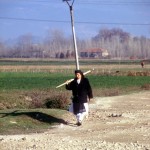 Of food and drink etc

Of food and drink, and international trade: With the conflict in former Yugoslavia in full swing in the 1990s, Albania had become an important transfer station between the world of refugees and the Italian shores of Europe. Spin-off was that illegal imports from Italy, on the way back, became a welcome supplement to the locally available produce. 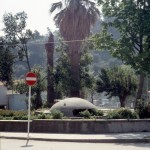 Bunkers: The one thing no visitor to Albania will ever forget, are the bunkers, small or slightly larger, concrete, round pillbox bunkers that dot the countryside, at every remotely strategic location. There are over 700,000 of them, built under the rule of Enver Hoxha. 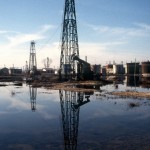 The Albanian oil fields: In the 1920s an internal company report by a BP executive boldly stated that looking for oil in the Middle East would be a waste of time; instead, Albania would be where the oil boom would take place. It turned out to be different, but the country does produce humble amounts of oil, from fields that contain forests of derricks. 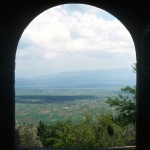 The Ardenice monastery: About half an hour outside Fier, Albania’s oil capital, is Ardenice, an Orthodox monastery that in the first year of our stay in Albania served as a hotel. A beautiful place, and comfortable hotel, for as long as it lasted: at one point the building was returned to the church, as it should be. 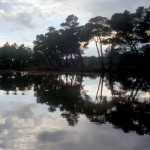 The Divjake-Karavasta National Park:  Just north of the Albanian oil fields and the Ardenica Monastery is a national park, at least in the mid-1990s unknown to any tourist guide books, and quite unusual in Albania. The park surrounds the Karavasta Lagoon, near the village – and the natural gas fields – of Divjake. 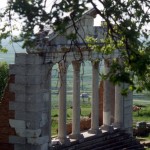 Apollonia: South of the Divjake are the ruins of the Greek and Roman city of Apollonia, or what is left of it in the free-for-all atmosphere of post-communist Albania. Every time we visited the local museum, more of the collection had disappeared and there was less to admire. 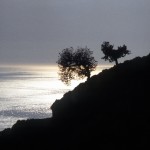 The Albanian Riviera: Being positioned along the Mediterranean, or more precisely, the Adriatic Sea, Albania has a beautiful coastline, which, however, is far less developed than most other Mediterranean countries. Not only less developed, also less accessible. 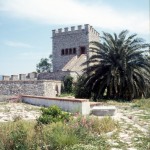 Butrint: All the way to the south of Albania, near the Greek border, is Butrint, an Illyrian, then Greek and then Roman town with origins in the 7th Century BC. A UNESCO World Heritage Site, is was long on the organisation’s endangered sites list, because in the Albania of the 1990s not much was protected. 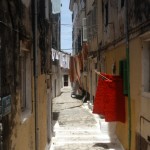 The Corfu excursion: Corfu, the Greek island, is just 2-3 km from the Albanian shore, a swimmable distance for many, and thus indeed a popular emigration route for many. We ourselves, we did a daytrip, up and down, by more comfortable ferry from Sarande to Kerkira, Corfu’s main town: an incredible contrast to Albania, so nearby. The Countryside: Albania is a relatively small country, smaller than The Netherlands, for instance. It is also relatively sparsely populated, with few urban centres, and most people living in the countryside, either on the coastal plains in the west or in the mountains towards the east. And a countryside it was, in the mid 1990s! 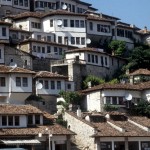 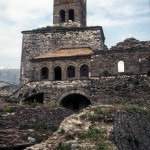 Read more on Berat and Gjirokaster 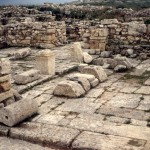 Byllis: The ruins of another Roman town, with the remains of several early churches, could be found high up the hills near the town of Ballshi, along the Vjose River. A bad road, 4WD only, led up to the complex. 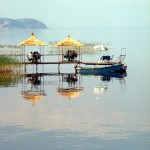 The Lake Ohrid area: Part of the border with Macedonia, in the east of Albania, is formed by one of the deepest lakes of Europe, Lake Ohrid. On its shores in the lovely Lin village and basilica, a little further is the larger town of Korca, capital of the south-east, and from there it is a wonderful drive back to Tirana, via the Devoll Valley 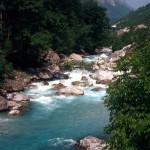 The trip to Tropoja: One of the most beautiful areas of Albania is Tropoja, in the north-east of the country along the borders of Montenegro and Kosovo. However, at the time this was also the wildest area of the country, with bandits and blood feud, an area where you want to be accompanied by a local.