the criminals the apartment (2)

All the time there was something missing in the streets of Port-au-Prince, but I didn’t know what. Now I remember. The schools have opened for the first time since the earthquake, and in the mornings the streets are filled, once again, with children, in colourful school uniforms, carrying their books in backpacks – the smallest kids seem to have the biggest packs.

Initially, the government had decreed that schools had to open by the 1st of March, but this proved unrealistic. One of the biggest problems was that children didn’t want to get back into the buildings, even if they were deemed safe: fear is a powerful driver. Then the date was postponed to 5 April, immediately after Easter, and even if not all schools made this deadline, two weeks later most have opened. And it is noticeable, and not only because of the children in the streets. Morning traffic jam has returned with a vengeance, as parents will still bring their kids to school in the car if they can – I think it is actually something of a status symbol. Did anybody mention fuel shortage, recently? 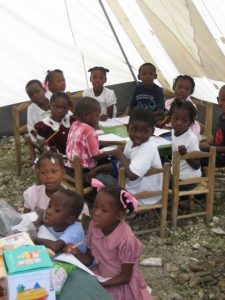 for the moment we do emergency schools, in tents

But what does it mean, “schools have opened”? Many schools, especially the bigger ones, have collapsed, so somehow we need to create alternative learning space. In some places we have installed tarpaulins, in others we have set up school tents – we call them emergency schools, they are not going to last long with heavy rains and hurricanes coming, but it is a start. We are contemplating temporary schools, wooden or metal structures with plastic sheeting as roof and walls, or perhaps we should move straight away to transitional schools, similar structures but with more durable walls and roofs. The main considerations are time – if we go directly to transitional schools, children will need to stay longer in the emergency tents – and costs, obviously taking out the temporary schools phase saves money. And then there are the schools that have no room, especially urban schools suffer from this inconvenience: there is only limited space available, and if we want to replace, say, the emergency tent with a more durable structure, we need to pull down the tent first, ie interrupt classes for a while – and children have already missed so much school in the past three months. Not easy! 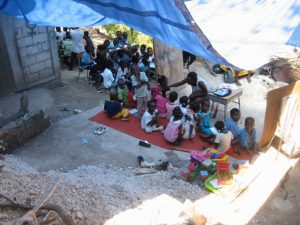 or under tarpaulins, tied to a building

A minor issue I have not yet mentioned is that 80% of the schools in Haiti are private schools, not like the top level schools you have in some countries, hugely expensive but better than the government schools, no, these are mostly very basic for-profit institutions that spring up in places – and there are many – where there are no government schools, and can thus charge hefty fees without providing the quality. Supporting the rebuilding of those schools may serve children’s interest, but will mostly serve the school director’s interest. Not easy! We would mostly try to negotiate with the school that they forfeit school fees for a while, in return for our support, but who is then going to pay the teachers? Not easy! Yet, you cannot NOT work with them, because you would disadvantage so many children, who after all are not to blame. Not easy!

And all of this is not helped by some of the attitudes we experience in schools. Last week one of our staff members was threatened by some of the school directors that have not been included in our program, after all, we can only do so much (and only if you agree to our not unreasonable, and fairly generous terms). The director of the school where this happened then stepped in and talked the others out of the school again, only to demand a fee for his protection services afterwards. A fee as in ‘if you don’t pay up, I don’t let you go’. In another school one of our staff members was asked to pay for the salaries of four security people, brought in specially to protect her during the visit to the school. Not that we had asked for the protection, this was at the initiative of the school director, but paying she did, in the end. All very unpleasant, and obviously jeopardizing our ability to work. And in the long term, jeopardizing children’s opportunities to attend school.

But, for the time being, children are back in school, some form of school, and the streets of Port-au-Prince have returned to normal, again. I suppose any of the above challenges are considered normal, too.

One Response to the schools