Misfat and Al Hamra Sur to Salalah: the Coastal Road 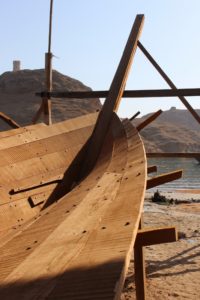 a dhow being built in Sur

The Sharqiyah is the eastern-most province of Oman, where the old trading towns Ibra and Sur are located.

This is rapidly becoming a tale about, for one reason or another, deserted villages and towns. Whether civil war-bombed Tanuf, crumbling Fiqain or abandoned Al Hamra, in many places we encounter houses that have been left by their occupants.

Ibra is another case in point. Located in the eastern Hajar Mountains, in the province of Sharqiyah, this was an important town in colonial times – Oman as a colonial power, that is. It controlled the trade  with Zanzibar and along the East African coast -, which can be seen from the homes of wealthy merchants, who traded. The houses have now been abandoned and are falling in disrepair – according to an Omani we spoke because people die, and their children are not interested in maintaining the old house anymore, but prefer to move to modern housing on the other side of town, with better facilities. Which is a pity; some of those once magnificent houses, with arched entrances, multiple story, high ceilings, and wooden beams and walls decorated with plaster, are even as ruins still very impressive – and quite different from the crumbling houses in Tanuf and Al Hamra. Here, too, niches have been built in the inner walls, now sadly exposed to the elements. But in this climate it may take a while before they entirely fall to pieces… 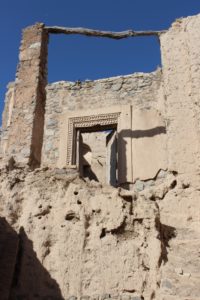 old door in between the ruins of Ibra 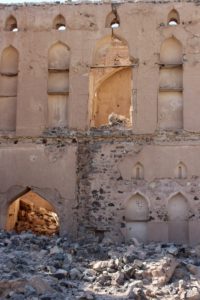 ruins of a mansion 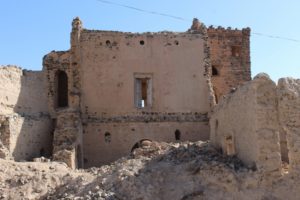 Outside Ibra, desolate country side. Bare rocks, mountains in colours varying from black to grey to brown, and hardly any vegetation, safe for the occasional low scrub. Somewhere here is the Iron Age archaeological site of Lizq, with a unique ceremonial staircase and dramatic views from the top of the fortified hill across volcanic landscape. Unfortunately, this will remain one of the regrets: lack of time prevented me from visiting this exiting-sounding place off the beaten track.

Instead, we continued to Sur along an excellent highway, skirting the desert, and the dunes of the Wahiba Sands. 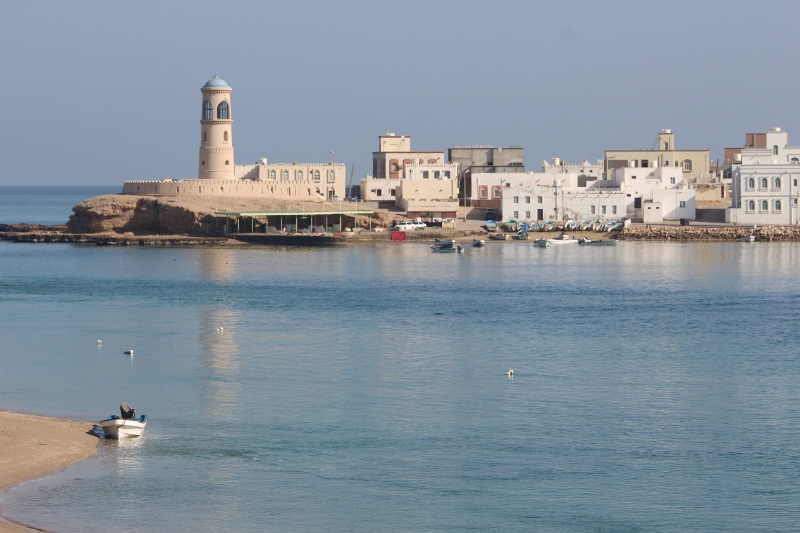 the lighthouse of Al Ayjah, part of Sur 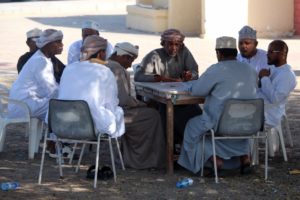 a game of dominos keep the men off the street

Sur is a coastal town, mostly famous for its dhow-building, the construction of the large, ocean going wooden ships. This age-old Omani skill survives only here – but in a curious process of reverse skills transfer the building is actually done by Indians and Bangladeshis, I didn’t seen many Omanis on the site. The building remains impressive, though; there are several boats being constructed at the same time, each surrounded by enormous frames, a kind of a scaffold, in which they are patiently being put together, individual wooden planks carefully being shaped, and connected not with wood joints anymore, but screws and bolts. The wood comes, apparently, from the mango tree, but most of it must be from outside Oman, given the sparsity of trees here. 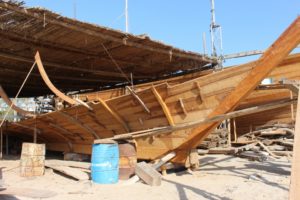 a dhow in the shipyard of Sur 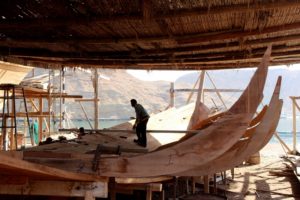 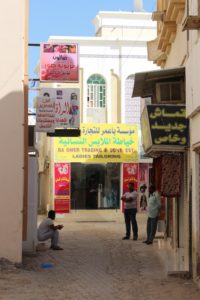 The centre of town is a small peninsula, with the sea at one side and a lagoon on the other, and connected across with a suspension bridge.  The sea side has an attractive corniche, and a wide sandy beach, which is separated from the road by a marble-covered wall: no doubt largely to keep the fancy 4WD cars off the beach. Behind the corniche the individual houses obviously date from before the motorised era, there are no real streets here, just enough space to walk inland. Which leads an old souq, mostly narrow streets with a variety of shops, each indicating whether it is a tailor, ladies tailor or men’s tailor, or garments, or ready-made cloths – these distinctions still mean something here. Not very exciting, all together, but good for a stroll of an hour or so. 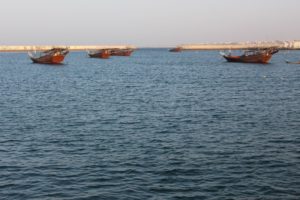 fishing dhows in the protected bay of Sur

A little further north is the port, full of fishing dhows floating, or moored. Along one side a wall has been constructed that protects the bay of the port, a long bending pier with concrete slabs to shelter anybody walking along here. As an unusually jolly initiative, these concrete slabs have been given over to local artists, who each have painted a piece of the wall, very colourful – even though the artistic level is not always of equally high standards. I am not sure whether it is related, but the pier is, in the late afternoon, a popular place for a walk and for people jogging, it is quite busy, in fact, nice atmosphere. 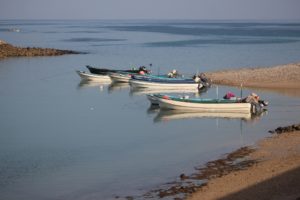 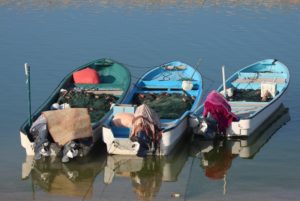 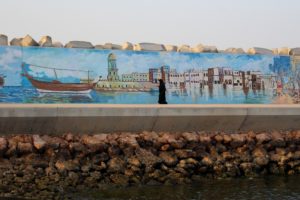 part of the painted wall protecting the harbour 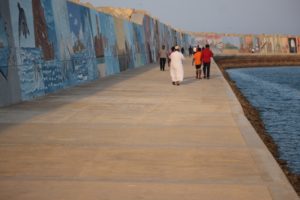 a popular place for a stroll late afternoon 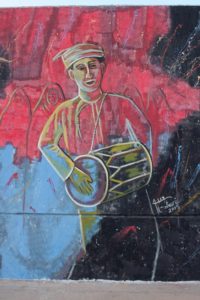 one of the art works in the wall 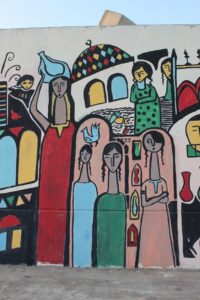 and another one, colourful 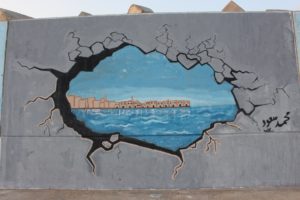 a more original piece of art

view of the harbour of Sur 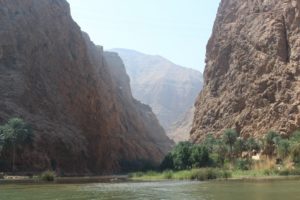 the entrance to Wadi Tiwi 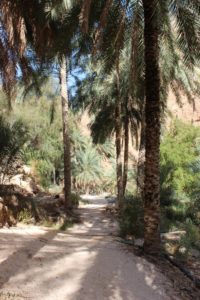 palm trees at the beginning of the wadi 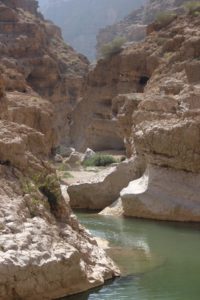 the ever narrower canyon towards the end

Some 40 km north of Sur is Tiwi, another fishing village along the coast, flanked not only by pebbly beaches, but also by two narrow wadis, Wadi Tiwi and Wadi al Shab. We opted for the latter, because I had read that there was no road, no cars, inside the wadi, just walking. And so it was, although we learned that this does not necessarily mean that it is peaceful. Let me put it this way: we were not the only ones, neither were we the noisiest – what is it with people, that they need to shout as soon as they are with a group of more than three.

At the entrance of the wadi are plantations of date palms and other terraced agricultural fields, irrigated by  a well-maintained falaj system, as well as several thick black hoses for water transport. The path is mostly well marked, with the occasional concrete steps to help the less agile walkers – we gracefully accepted the opportunity -, although in places we also needed to clamber over rocks, or precariously cross the stream. Further into the wadi, the walls come nearer and nearer, and turquoise pools appear, which, despite clear signs forbidding this, are happily being used for swimming. In weekends, this must be even busier than today. And yet, the spoils of the tourist industry haven’t hit here yet: the access to the wadi, across a deep pool, is by small boat with outboard engine, which drops you on the other side for a Rial per person – although 10 years ago there was apparently a bridge across the water, now no more, which provides a convenient income for the local population. Drinks in a local mobile truck coffee shop cost even less, much less. Despite the ‘crowds’, this is one of the nicest outings in Oman, so far.

from Sur, we started on the coastal road to Salalah