the ghost town the trip (2)

With so much of the attention post-earthquake going to Port-au-Prince one would almost forget that the epicentre was actually some 35 km south, near a place called Leogane, and that a much larger area, stretching all the way to Jacmel at the South coast, has been affected. Early on in the planning – even before I arrived – we had decided to include these two towns and their surroundings in our operations, as well, and thus it was about time for me to visit Leogane and Jacmel and see for myself the challenges here. I knew Jacmel well, from ten years ago, when the organisation I worked for then had a large program in the South East, which was serviced from this charming little old town.

It takes about 1.5 hours to get to Leogane, most of that time is spent getting out of Port-au-Prince. I though Port-au-Prince had been badly affected, but driving south, from Gressier onwards (about halfway in distance) there is almost no single house standing along the road anymore. It is absolutely devastating, comparable to the tsunami damage. In Leogane itself it is estimated that some 85% of the buildings have been destroyed, most of them totally collapsed. Almost everybody lives in camps, or under plastic sheeting close to their plots, even in tents on top of the rubble. Here too, the centre of town has been turned into a tent city. Because it is so much smaller than Port-au-Prince, and much more rural, the situation is however much more overseeable. Fewer agencies work here, so it is easier for us to integrate our work, have mobile clinics and water and sanitation activities in the same area as where we have our child-friendly spaces and our temporary schools. 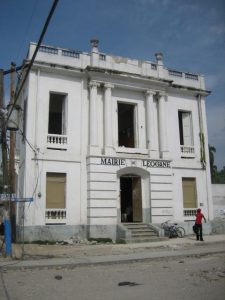 At least the marie – the townhall – is still standing, but whether it still can be used is another question 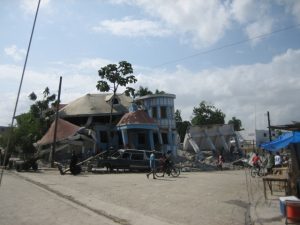 Leogane is totally destroyed, although I am not sure whether the damage to the local undertaker’s equipment is earthquake-related. 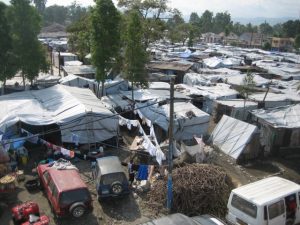 the open square in the Leogane town center has turned into tent city. 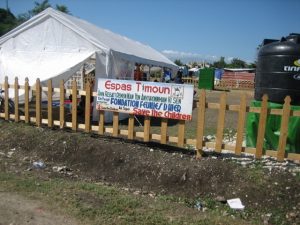 espas-timoun in a camp outside Leogane, next to a water point 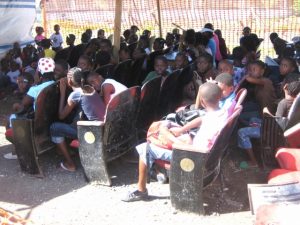 I don’t think I have explained the child-friendly spaces yet, or espas-timoun in Creole (space for little people, as children are called – try saying it aloud with a French accent). These are areas, mostly tents in the camps, where parents can leave their children, a place where they don’t have to worry about the children’s safety, where children are, depending on their age, kept busy with the appropriate games or learning activities. Also, a place where children can deal with their traumas – although we haven’t really developed that aspect very well yet. In the mean time parents can get on with their work, with what has to be done, and that is usually a lot after a disaster. Good concept. Particularly interesting is the centre that has been set up inside the football stadium in Leogane, where the seats from the sky-boxes (well, sort of) have been ripped out to serve as chairs for the children! 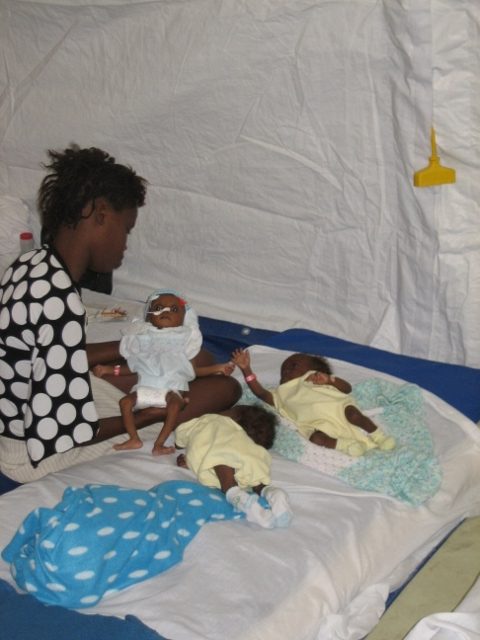 and there is support for the smallest of the smallest, this is our stabilisation centre in Leogane