The road from Leogane to Jacmel is badly damaged in several places. Now was this road never very good, as it runs through the hills and is subject to frequent landslides, but after the earthquake large cracks have opened in the tarmac. Canadian army engineers that have surveyed the road fear that, once the rainy season gets underway, the road may actually disappear in one or two places, isolating Jacmel from the rest of the country. Other road options are simply not serious options, they are – and always have been – in an even worse state than the main road. Let’s just hope that the rains are not going to be too bad, this year. 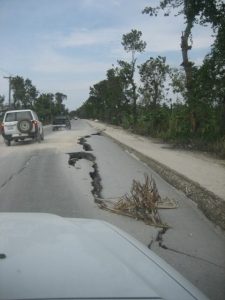 large cracks have appeared in the road surface At present it takes about two hours to reach Jacmel. The road winds its way up, with pretty views over the plains back to Leogane, then drops down on the other side of the mountains with a spectacular view of the southern coast. The town seems to be less affected than either Leogane or Port-au-Prince. However, on closer inspection it becomes clear that many of the grand old houses – already in a state of disrepair ten years ago – will probably have to be pulled down, and many of the smaller houses are badly cracked, too. Once again many people live in tents in the streets, outside their houses. And once again the local stadium provides additional space for provisional shelters, although the camp population here is a lot less, perhaps 8,000 people. To make things more difficult, there seems to be some international rivalry going on in the camp, with factions favouring the Americans, others favouring the Canadians, and a large following for the Venezuelans, who have come out in a big way here (see the flag in the photo below). A distribution of cooked food was being organised, this time by the WFP, the World Food Program, targeted at children. Why on earth someone would go through the trouble of cooking food is incomprehensible to me, just distribute it and let the people decide for themselves what they want to do with it. But it makes for photogenic scenes. As for the rest of the camp, just imagine what this is going to look like on a rainy day. 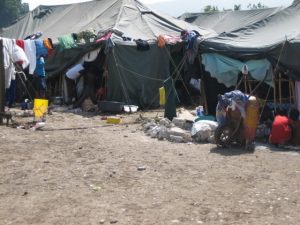 The tent city of Jacmel is situated in the stadium, complete with big army tents (as opposed to plastic sheeting in most other camps) 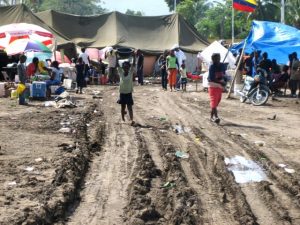 Market stalls in the camp, and a Venezuelan flag 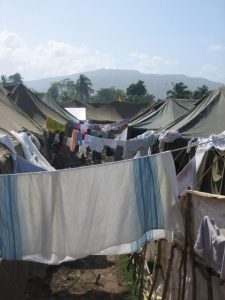 Jacmel camp, with all the daily business of people, from laundry to market stalls.

Our activities in Jacmel are very similar to those we do elsewhere, with clinics, transitional schools and child-friendly spaces. One especially close to my heart is restoring markets, specifically rebuilding market stalls in a food court on the beach, so that this can start operating again in the next few weeks. Jacmel is famous for its fresh fish and lobster, but it needs to be prepared and served somewhere to be enjoyed, no? Another important activity is supporting the farmers in the days running up to the rainy season, making sure they have access to seeds so that agriculture and food production does not suffer in the aftermath.

I’ve got quite a lot of pictures, today. 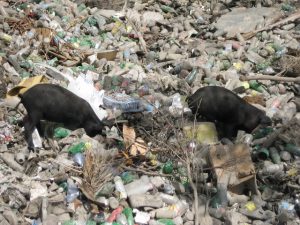 The Jacmelians have identified an alternative way of drains clearance, although I am not sure how well these pigs handle the multitude of plastic bottles 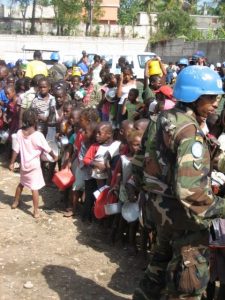 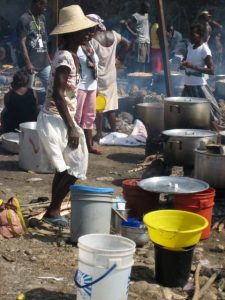 just look at the logistics of camp cooking, for distribution of cooked food to children 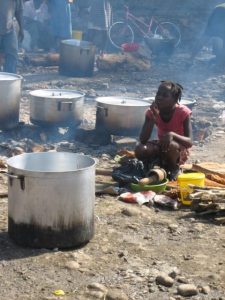 a lonely girl waits for the food to be ready 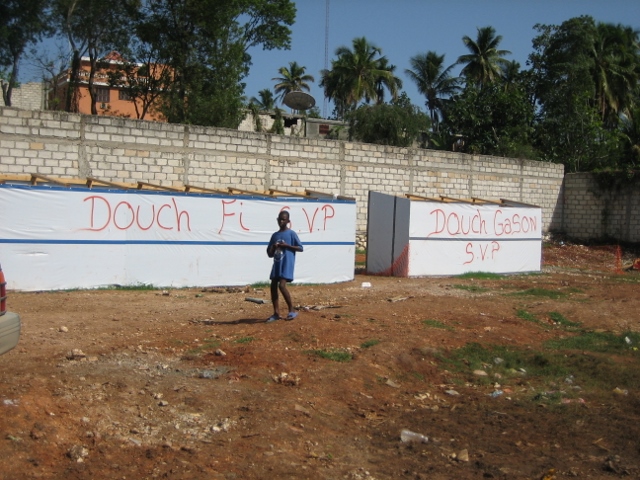 And the showers in the Jacmel stadium, for boys and girls – another exercise in Haitian Creole (think French aloud)