Around the Capital To Chiapas 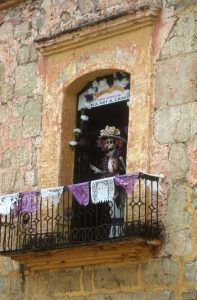 a window and balcony in Oaxaca

South into the mountains, there are several interesting archeaological sites near the provincial town of Oaxaca

So far we have stayed fairly close to Mexico DF, but now it is time to explore further afield. Our next destination is Oaxaca, in the mountains to the south. Soon after Puebla the landscape changes, becoming spectacularly desolate, red and white earth, with hazy – always hazy – mountains in the back. No matter how close you are to mountains in Mexico, they always seem to be hazy, almost invisible. Cacti start to appear, in many different forms, some with single spines and others with elaborate multiple branches. The road starts to climb, away from the river valley below, which remains bone-dry. 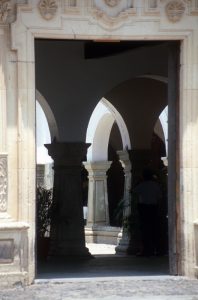 entrance of the Santo Domingo ex-Convento in Oaxaca 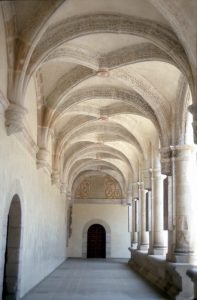 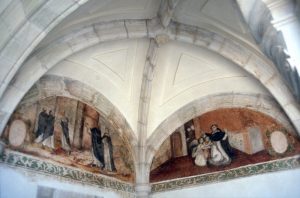 and some of the murals

Oaxaca is another colonial gem, with brightly coloured low buildings, many with lovely patios inside, many turned into hotels or restaurants. A tree-rimmed Zocalo with covered corridors contains a lively market area and the Lorenzo church. A little further away is the Santo Domingo convent, turned into a museum holding a fabulous collection of pre-hispanic artifacts. The building itself is also impressive, with many patios, murals and a beautiful cactus garden. Our hotel is a simple courtyard building, with a gallery in the late afternoon sun, good for Tequilla con Toronja, the local grapefruit softdrink. 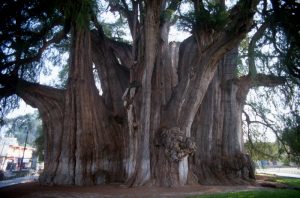 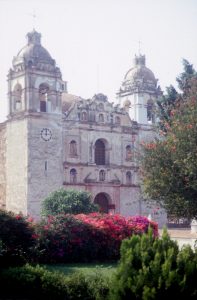 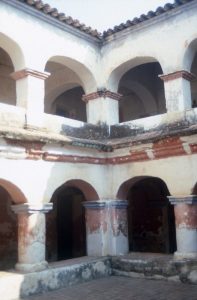 with a slightly run-down patio, which looks authentic 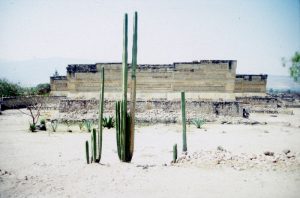 one of the structures at Mitla 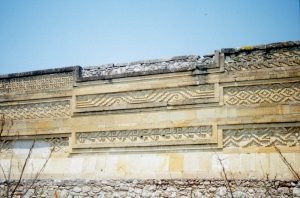 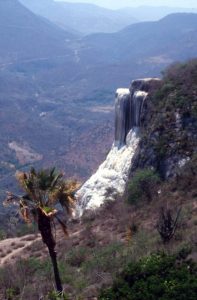 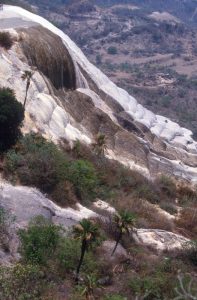 close-up of the “fossilized” waterfall

South of Oaxaca we first pass Tula, which claims a 2000 year old tree which has been turned into a touristic attraction, and yet another ex-Convento at Tlacochuahuaya, some way from the main road but worth the d-tour because of the pulpit and the organ, and the slightly run-down patio. To beat the tourist busses, we then move to Mitla, a small but attractive pre-columbian site with multiple temples, decorated with geometric designs. Past Mitla, we come to Hierve el Aqua, a ‘fossilized waterfall’, in reality a sulpher spring which has created an attractive white cover of rocks, and warm pools, with undoubtedly healing powers, at the top. Full of local tourists, and somewhat overrated. 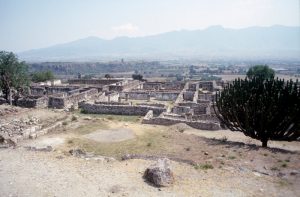 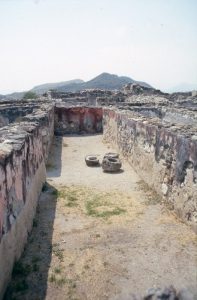 with the remains of buildings 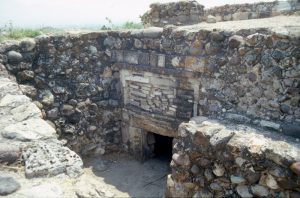 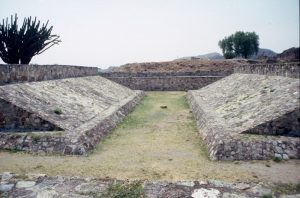 and a fully developed ball court

On the way back we visit some of the minor sites, much more relaxed, authentic, with hardly any tourists, and altogether perhaps more enjoyable to wander around than the heavily exploited sites. One can almost imagine the Zapotecs and Mixtecs living here a 1000 years ago, or so. Firstly, we go to Yagul, rather small but well preserved, on a hill full of cacti, and with a magnificent view over the valley, and over the whole site, from an outcrop above. Then Lambityeco, where there is not much to see apart from some sculptured faces with headdresses. And lastly Dainzu, when it is already almost dark, also a small site with a one-sided ball court (at least, one side has been restored) and some bas reliefs, albeit poorly visible. In between, we visit the village of Teotitlan, which is mainly remarkable for the restraint we showed, not buying any of the rugs that were for sale. But if I am ever in need of a friend, I’ll return: all the rug sellers called me their ‘amigo’. 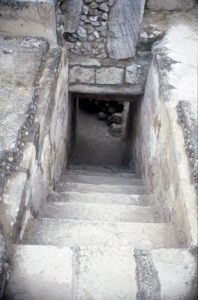 entrance to the tombs at the Lambityeco site 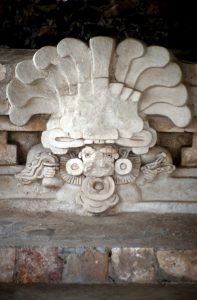 and a sculpted head-dress 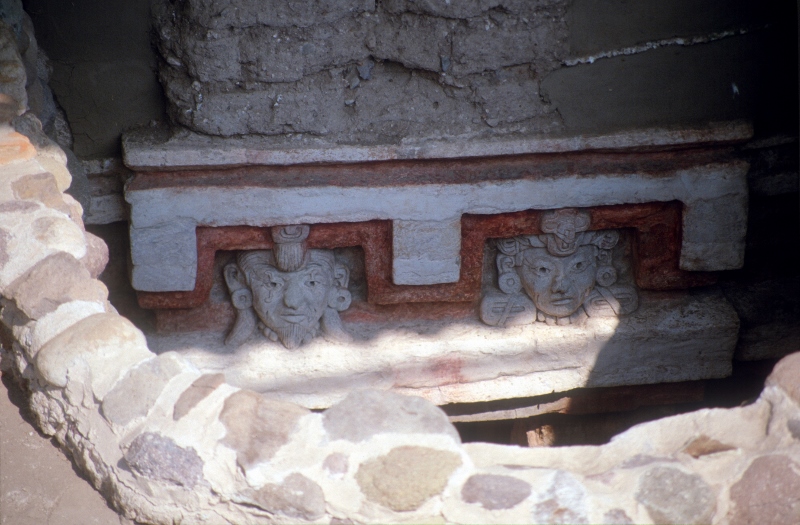 as well as several heads at the Lambityeco site 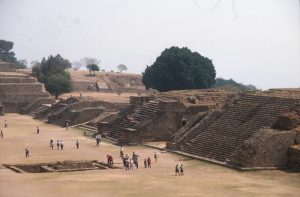 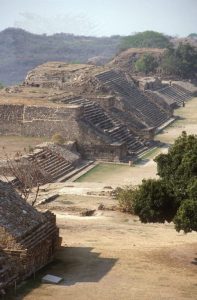 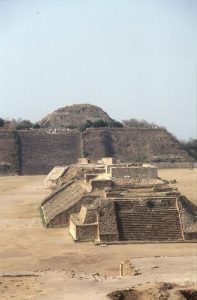 and platforms, in front of the main structure 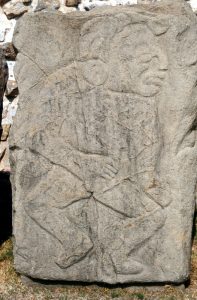 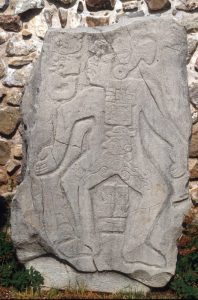 The best known pre-columbian site near Oaxaca is Monte Alban, indeed truly impressive, but because of it, and the tourism it attracts, also highly regulated: you are not allowed anywhere. I doubt somewhat the originality of the restoration, many temples with bas-reliefs seem to have been built at will, from loose boulders. The market town of Zaachila is rather disappointing, we have seen much better, whilst the small site here is mainly remarkable for the two tombs, one of which has well-preserved bas-reliefs. On the way back we stop briefly at the unfinished Dominican Convento of Cuilapan, which never manages to look real to us. 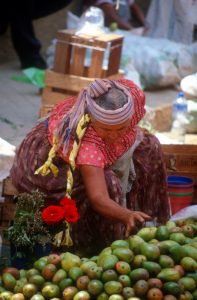 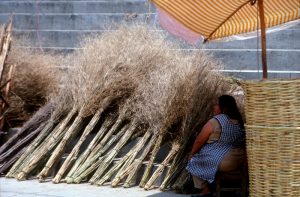 and another one, selling brooms 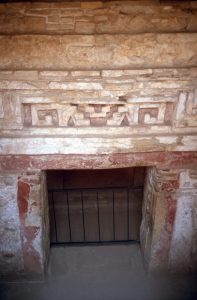 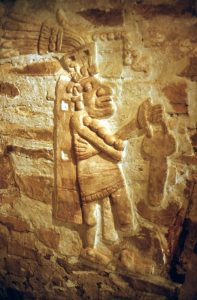 decorated with mythical figures in bas-relief