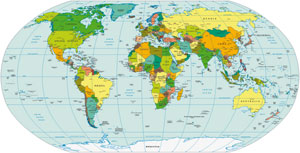 Travelers are always looking for fellow travelers. But whether the Travelers’ Century Club is what I was looking for, I doubt it.

There is something called the Travelers’ Century Club, TCC, for people who have traveled to one-hundred countries or more. Recently, I saw a copy of The Centurian, their monthly newsletter, where on the back page several members were congratulated with their newly achieved Diamond membership, for having visited no less than 300 countries. I didn’t think there were that many countries in the world, despite the ever-expanding numbers from collapsing empires and successful independence movements, until I checked the TCC countries and territories list on their website. In fact, they recognize 324 countries and territories, thereby observing that “some are not actually countries in their own right, but they have been included because they are removed from the parent country, either geographically, politically or ethnologically”. Right!

Intrigued, I had a closer look at the list, to see what that means, “removed geographically, politically or ethnologically”. Predictably, the UK is not one, but five countries (England, Scotland, Northern Ireland, Wales and Jersey/Channel Islands). Hmmm. Cyprus is two countries, one a Republic and the other a Turkish Federal Republic. OK, I can live with that, clearly politically separated, more so than the UK, at least for the time being. But whether Crete and Corfu need to be identified as separate entities from Greece is more debatable; equally doubtful is the split in European and Asian Turkey, or African and Asian Egypt (the Sinai). Indonesia exists as a country, but so do Sumatra, Java, Kalimantan, Sulawesi, Irian Jaya (the Indonesian part of New Guinea, helpfully also called Dutch New Guinea by the TCC, although the Indonesians themselves call it Papua, already for quite some time), Moluca and the Lesser Sunda Islands, covering all the other Indonesian Islands – including Bali, the one island that really stands out as culturally, religiously different. There are definitely ethnological and cultural differences within Indonesia, but this to me seems to have been mostly designed to create as many countries as possible, so that more and more people can become member of this illustrious club.

The rules defining a visit to a country appear to confirm this. According to the site, “it was decided that even the shortest visit would suffice — even if only a port-of-call, or a plane fuel stop. This greatly widens the field and will give the traveler a better chance to qualify for one of the most unusual clubs in the world”. Right! Had you flown with the cheapest possible ticket from Amsterdam to Harare in the 1980s, some Bulgarian carrier would have made 11 stops on the way, giving you a head start towards membership. In my case Brazil would have counted, from a brief visit to the Iguazu Falls some years ago, and I could even add Mozambique, from the time I stepped across the road that forms the border between Malawi and then civil-war-torn Mozambique in 1987.

Why would you want to become a member of this club? Well, they have a website with a traveler’s forum, and several chapters – local clubs – throughout the US (mostly) and the rest of the world (which is Canada, Germany, a new one in The Netherlands, and, surprisingly, all of the UK, this time not split up in individual countries). And all this is yours for the humble registration fee of 100 US$, plus an annual subscription of between 75-95 US$.

I haven’t reached the 100 countries yet, not even by the TCC definition (which, the site assures me, is no problem, I could become a Provisional member, as long as I pay up). If and when I do, I am not sure I will register. A little too opportunistic for my taste. Which doesn’t diminish my admiration for somebody who has already visited more than 300 out of 324 territories.

Or are there more than 324? There is also a list of some 50 retired countries, and there is the so-called Grandfather Clause, that determines that an area which was recognized as a country or territory in the past and is deleted from the active list will still count for the purposes of having reached the minimum number of destinations required for membership. Did I say opportunistic?

Have a look at http://travelerscenturyclub.org

One Response to The Travelers’ Century Club