In 1993-1994 we lived in Diyarbakir in SE Turkey for some 18 months, during which time we traveled extensively in the central and eastern part of the country. We liked Turkey so much that we returned several times, of which once for a longer trip, four weeks along the Mediterranen in 2000. Our latest visit was a long weekend Istanbul during our trip through SE Europe, in autumn 2014. 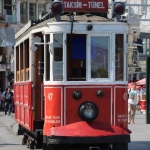 Only the last visit has, so far, been captured on the site.

But don’t despair, our earlier experiences will, in due course, be included, too – just need time!